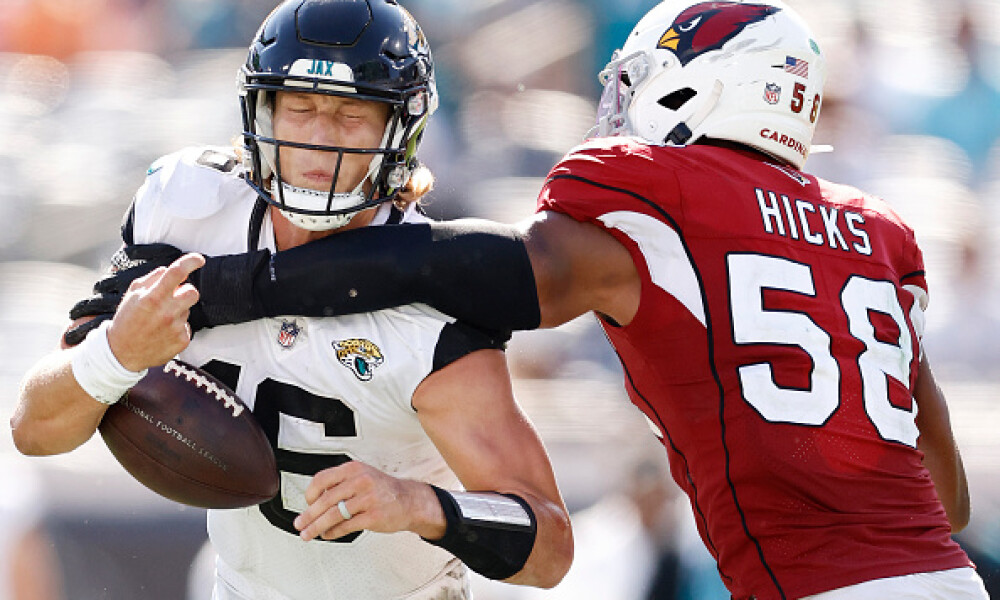 Teams are beginning to settle in to their rotations on defense, and we are beginning to see the three-down/every down IDPs begin show up on the stat sheet. Of course, there are the defensive players that are beginning to pick up steam as the early season progresses, whether due to ineffectiveness by the former starter or injury opportunity. One constant in the IDP world is that things constantly change, so continue to peruse the wire and free agent market to upgrade your rosters weekly.

Crowder is the first of three LBs that is operating as an every down starter for this team. In that role against the visiting Falcons, he picked up 11 total tackles (TT), with four of those being of the solo variety. He also contributed a pass deflection/defense (PD) while on the field, ticking the big play box, too. So long as he is on the field for all the defensive snaps, he will be a value to your IDP squad.

Despite early concerns that Hicks was destined to for a backup role on the Cardinal defense heading into 2021, he has emerged as the defensive signal caller for the Arizona defense and only missed two snaps on the season. He is coming off a 12 TT (seven solo) effort where he was also able to force a fumble (FF), pick up a PD and be credited with a sack. Tackles and big play production make for a free agent pickup immediately.

Not to be confused with his brother, Quinnen, this Williams has stepped into an every down role (so long as Jarrad Davis is sidelined, at least). He had six TT (five solo) with two of those wrap-ups being for a loss of yards (TFL). He also had a FF in the contest in Denver at Mile High Stadium last Sunday.

Taylor sat out all of 2020, and started out in a limited role this season, but has been increasing his PT (playing time) as the season progresses. He picked up five TT in Week 3 (four solo) to go along with a sack and a FF, to bring out the big play value.

Muhammad is seeing more time on the field with rookie Kwity Paye sidelined with a hamstring issue, and he collected seven TT against the host Titans (five solo). He gets a nice matchup this coming week with the Dolphins featuring backup QB Jacoby Brisset and a weak pass-protection scheme on the offensive line.

Simmons has a tremendous matchup in store, with the Titans heading to the Meadowlands to face Zach Wilson and the Jets. He could certainly add to the 1.5 sacks he has on the season against the Jets team that has allowed a NFL-leading 15 sacks to date.

Clark feasted on the Lions in Week 3, racking up 12 TT (nine solo, one TFL) with a sack and a QB hit/hurry (QH) to make his big play side of the ledger look attractive, too. He now heads to Denver to face the Broncos who have been the most generous offense to opposing safeties in terms of fantasy point production through three games.

Wingard has seemed to step past rookie Andre Cisco last week, playing 100% of the snaps on defense for the Jags. He snagged seven TT (four solo) with that increased PT, and it is a near certainty that the struggling Jacksonville team will see plenty of tackle opportunities while the defense occupies the gridiron week in, week out.

Prior to this season, it was the lack of tackle production that kept Smith’s IDP fantasy value depressed. Through three contests this season, he already has collected 23 TT (19 solo). Against the visiting Seahawks, he had eight TT (six solo) and a PD. Cleveland, the next opponent, is in the top half of the teams as far as points allowed to opposing safeties.

The second-year defensive back led his team with 11 TT against the Titans in Week 3. Be advised, however, that he outpaced his production in the first two games by two tackles, so the increased production is not necessarily guaranteed to continue apace.

Our lone cornerback this week, Campbell gets the uptick after the Jaguars traded C.J. Henderson to Carolina, opening the door for the rookie to see additional PT. As with any rookie CB, look for him to see plenty of attention from opposing offenses as they test his skillset. He is coming off an eight TT effort (six solo) and should continue to see plenty of tackle potential going forward.

While playing significant snaps, he has been contributing pedestrian stats. Now with Danny Trevathan eligible to be activated in Week 4, his value is almost certain to take a further hit.

Collins has worn out his welcome in Detroit, as the Lions seek out a trading partner for the LB. He was DNP in Week 3, and could see more of the same until he finds a new uniform to don.

Despite playing 73% of the defensive snaps this past contest, he only put up an assisted tackle and a QH on the stat sheet. Those sorts of numbers are of no use to fantasy owners and he can be discarded for a more reliable DL.

None to speak of, save for those in the injury report below.

Remember, the first team listed is the one to use your IDPs against. Do not go crazy, and play a LB5 against the Raven, but certainly you will do well if you own a top LB on the Bucs or Pats (nice bonus that those two play one another this week), or a DL on Dallas that you can plug in this week, for the most part.

This section is intended to serve as a shortened cheat sheet listing those waiver wire targets you should be considering if you need to plug a hole in your starting lineup. All these players are spotlighted above, and you can read my comments about them in the "Elevator Going Up" section of this article. As with last week,  all the players commented on are here; in future installments, however, that will not be the case as there is no need to waste your time searching for players that are heavily owned. This group consists of those that you may have a chance of locating on your league's waiver wire in that they are owned in significantly less than 50% of leagues. Happy claiming for your weekly matchups.

David Onyemata NO suspension (out until Week 8)