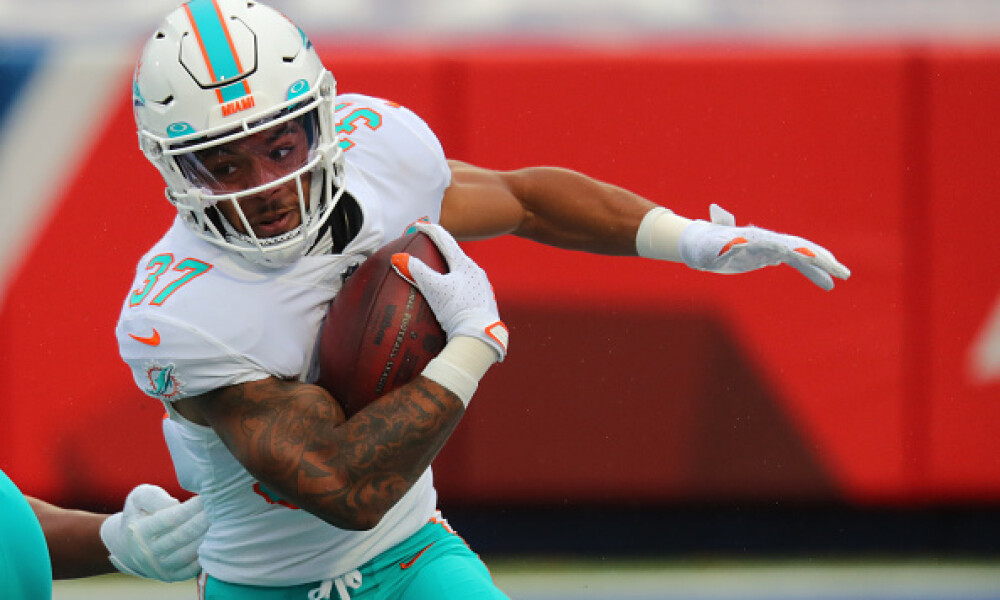 We’ve got Week 1 of the NFL preseason in the books, training camp battles are being fought and injuries, once again, take center stage. Fantasy football drafts – both seasonal and best ball -- are in full swing and every bit of information you can dig up could be worth its weight in fantasy gold. Keeping up with all the latest news is vital to your success, especially at this time when things are changing every day. To help guide you through which news is most important, let’s check out today’s Morning Buzz.

Three’s Company or a Crowd?

When Dolphins head coach Brian Flores took the podium after the team’s first preseason game, he sent shockwaves through the fantasy community with his declaration of a shared backfield this season. Obviously, nothing is etched in stone, but after a season in which Flores leaned heavily on Myles Gaskin, it was a little surprising to hear him talk about his desire to use a committee approach this season. Gaskin won the job early on in the season last year and Flores stuck with him whenever he could. Even when Gaskin returned from injury, the job was handed back to him, so this one hurts.

We saw the handwriting on the wall when the Dolphins signed former Rams running back Malcolm Brown, but the initial thoughts were, at worst, Brown would poach some short-yardage work. Maybe something near the goal line, at times. But if Flores is true to his most recent words, Gaskin will be sharing the workload with both Brown and Salvon Ahmed, who filled in for Gaskin last year. Ahmed and Gaskin are very similar backs in both size, speed and running style. They come from the same college program in Washington and were utilized in the same way, both in school and last year in Miami, so Flores sees them as interchangeable cogs in the machine. There is still time for one to outshine the rest and earn the lion’s share of the workload, but be wary when drafting and understand what you are getting.

Here’s the perfect example of click bait and panic within the fantasy football community. Larry Holder of the Athletic reported that Saints RB Latavius Murray could be fighting for a roster spot in New Orleans which, obviously, freaked out anyone who handcuffed Murray to Alvin Kamara in their drafts. The Saints brought in veteran Devonta Freeman and both he and Murray had some unimpressive performances during the first preseason game. Neither looked good out there and both were outshined by Tony Jones who played on the Saints practice squad last season and found his way into one game.

But the headline was inflammatory and anyone who read further saw Holder say that he still expected Murray to make the team and Jones’ performance, at most, “opened Sean Payton’s eyes a bit deeper on the depth chart.” He never even mentioned Jones with relation to making the team; said he deserved a spot on the practice squad. Just let this be a lesson to actually read the article and don’t just pay attention to the headlines.

Gordon’s Groin Opens the Door Wider for Williams in Denver

Broncos veteran running back Melvin Gordon better be careful with how much time he misses with this groin injury that held him out of the team’s first preseason game. Everyone has been bullish in rookie Javonte Williams since the NFL Draft, but now that Gordon has missed all of the offseason workouts and is standing on the sidelines with soft-tissue problems, the talk of Williams opening the season as Denver’s RB1 is getting louder. Williams rushed five times for 29 yards during his brief time in the game and had a four-yard touchdown run called back on a holding penalty, so he is building up the coaches’ confidence in him every day. Williams has already passed Gordon on the ADP charts and could very well be a bell cow for fantasy if these trends continue.

Swift on the Mend

Lions second-year running back D’Andre Swift (groin) is expected to return to the practice field on a limited basis this week. As the future of the Lions backfield, he is not in any danger of losing his standing with the team, but no one is backing off their belief that this is going to be more of a committee than fantasy owners will like. Jamaal Williams continues to work with the first-team and will remain a fixture in this offense, even if he is being used to spell Swift. Remember how much work he got in Green Bay? Remember how he was even utilized in lieu of Aaron Jones on passing downs even though Jones was a decent pass-catcher? Anthony Lynn was all about rotating backs in back when he was coaching the Chargers and there is no reason to think he won’t do it again in Detroit. Swift truthers can clamor how great he is all they want – and believe me, from a talent standpoint, he really is – but this is about how the coaches want to run the team and if they want to give opportunities to Williams as a way to preserve Swift, they will.

This is Not the Separation You Are Looking For

When you talk of separation and wide receivers, you like to think we’re talking about it in relation to coverage and cornerbacks. Unfortunately, in Houston, the separation we get with recently acquired Anthony Miller is in his shoulder. Head coach David Culley didn’t provide an update on the severity of Miller’s shoulder separation, but it doesn’t sound good. Especially when you consider the shoulder issues Miller has had in his past. He shouldn’t have been on anyone’s radar to begin with, but this solidifies that even more. It also does help with the number of reps Keke Coutee could see coming out of the slot. He actually might still be worth a late-round flier in deeper leagues, but this offense in Houston is still very much a disaster.

Bills WR Stefon Diggs (knee) has been out for more than a week, though head coach Sean McDermott doesn’t believe the injury will linger into the regular season. While coach-speak is a dangerous thing, we are not downgrading Diggs at all just yet. Keep monitoring but don’t be afraid to draft him.

Jets WR Elijah Moore (quad) is hoping to return to practice next week. He was having a strong camp, so this is obviously a bummer, but similar to Diggs, we’re not downgrading him at this time. The Jets said, after tests were run, that Moore avoided a much more serious injury, so hopefully they remain cautious before letting him get back out there.

Vikings WR Justin Jefferson (shoulder) returned to practice and all looks good for the second-year wideout. It’s a sprained AC joint, so the team is going to be cautious with him, but returning to practice, even on a limited basis, is encouraging.

Eagles WR DeVonta Smith (knee) has been out for two weeks with a sprained MCL but is getting back onto the field this week for some team drills. This is, obviously, great news for the regular season, so don’t be too alarmed as he likely sits out the rest of the preseason.

And in the world of complete afterthoughts, the Jaguars released your favorite TE Tim Tebow. I only mention this because I know how much #FANation likes to needle me with late-round best ball selections of him. How you feeling about that pick now? We told you it was a waste!

By the way, if you still haven’t subscribed to Fantasy Alarm for the NFL season, you better get on it now! With our last flash sale coming to a close, allow me to help you out and give you the promo code BENDER which takes 50% off our full NFL Playbook Pro package. That’s seasonal and DFS for all of the 2021 season. Just go to fantasyalarm.com/getnfl and come win with the #FAmily!