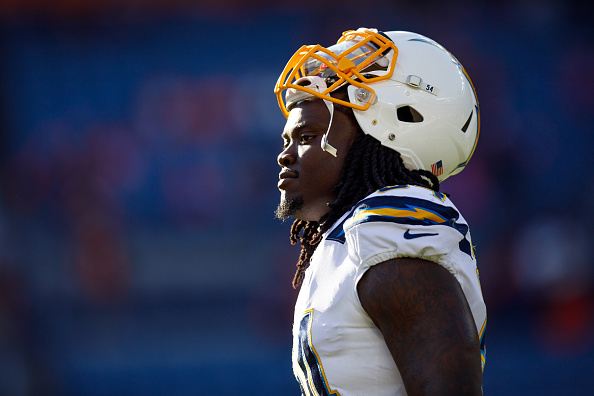 With the conclusion of this week’s action, we will be half way through the fantasy football season. Just a couple of hiccups so far, knock on wood. Now is the time to pick up your action, replacing those deadwood draft picks that just are panning out for you, and finding replacements that will potentially propel your squad into the playoffs. So, let us take a gander at those up and coming options in the IDP world.

Note that Reed is listed as a DE on ESPN, and getting a LB at DE is a bonus generally. Especially as he is coming off a five total tackle effort (TT) with three solos, and two for a loss of yardage (TFL). He also contributed a pair of sacks against the host Patriots, with a trio of QB hits/hurries (QH). Not bad for a LB but superb for a DL.

On the other side of the field in the game in Foxboro, Bentley also had a fine game, racking up 12 TT (eight solo, two TFL) against the Broncos. He chipped in a half a sack and a pair of QH to fill out his stat line. He has a great matchup this coming week, taking on the 49ers at home.

Singleton is beginning to pick up the pace, coming off a nine TT effort at home against the Ravens, with four solo tackles. He is seeing his playing time (PT) increase as the season progresses, so in tackle-heavy leagues, he is gaining value.

Green Bay’s offense struggled against a tenacious Tampa Bay defense in Week 6, and White rebounded with a double-digit tackle effort (nine solo, three TFL). He also collected a pair of QH and a sack of Aaron Rodgers . The production could level off against this week against the Raiders, but then he has the Giants on tap for another potential big game.

Greenlaw will be a useful LB so long as Kwon Alexander is dealing with his high ankle sprain. He was credited with seven solos in Week 6 against the visiting Rams (one TFL), and the Patriots are a mid-level opponent for LB point production in Week 7.

Our final LB this time around, Spillane is taking on an every down LB role for the Steelers, now that Devin Bush is gone for the balance of the season. If he can hold onto that role in the Pittsburgh defense, he should be a good source of tackles going forward.

Ingram is expected to be activated for the Week 7 contest against the Jaguars, and even with his snap count being limited, he is a force on defense. He is also owned in just a handful of leagues, and this is the ideal time to snap him up before your fellow owners realize he is back in action.

If you are in need of a DT in those mandatory leagues, Simmons has a mid-level matchup in Week 7, but then has two great opportunities with the Bengals and Bears on the schedule. He contributed big time against the visiting Texans last week: six TT (four solo, one TFL), a sack and two QH. The big play and tackle production is a huge bonus from a DT.

Willis put up 10 TT, all solos, against the Bengals in Week 6. He also added a pass deflection (PD). He is on bye in Week 7, unfortunately, or perhaps fortunately since any owner that has snapped him up may be forced to let him drop this week.

Week 7 sees the Browns heading to the Queen City, and the Bengals are yielding the most points to opposing CBs of any NFL franchise this season to date. Mitchell is an every down DB, so this is an ideal matchup for him.

The rookie stepped into a starting role due to injury, and is coming off a big week with seven solo tackles and a pair of forced fumbles (FF) as well as PD against the host Patriots. Week 7 has a good home contest against the Chiefs, who rank 8th in terms of points allowed to opposing CBs on the season.

None to write about this week, except for those in the Injury Report below.

His role on the defensive line for the Bengals makes him a liability in your IDP lineup. He collected a single solo tackle in Week 6, and there are much better options to feature going forward.

Mimicking the player discussed just above, Fowler managed to post just a single solo in his most recent effort. Recent production has been lacking, with just five TT over is last four games played.

He put up what could be considered a decent stat line last week, with a sack and QH, at least in big-play leagues, but a single solo tackle, albeit for a loss of yards, is not going to cut it. Especially with other teammates putting up much better production, such as Chase Young and Montez Sweat .

Smith’s star is not shining bright, with Week 6 delivering just two solo tackles for his owners. In fact, he has just four TT (three solo) over his last two games despite playing 133 snaps over that period.

Remember, the first team listed is the one to use your IDPs against. Do not go crazy, and play a LB5 against the Cowboys, but certainly you will do well if you own a top LB on the 49ers, a DT or CB on the Browns or a safety on the Lions that you can plug in this week, for the most part.