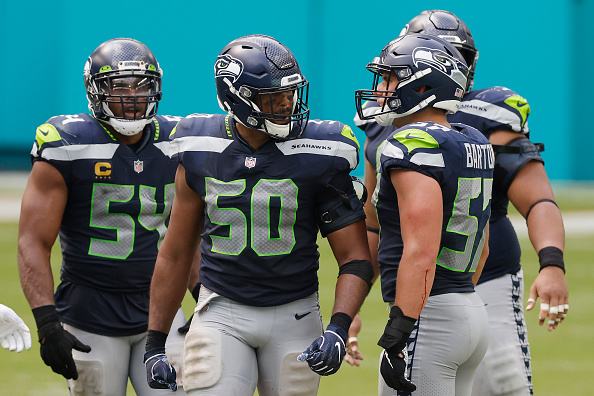 More COVID news floods the world of the NFL and fantasy football. Below in the Injury Report, you may note that some of the damaged warriors have a COVID designation following their IR status notice. Now is the time to fill your rosters with players from teams that are likely to suit up and play. Take a gander below to see which IDP to add from free agency or the wire.

Jewell has been close to an every down LB for the Broncos this season, and filled up the stat sheets against the Jets in Week 4: 10 Total tackles (TT), eight of those solos and two for a loss of yards (TFL), two sacks, a pair of QB hits/hurries (QH) and a pass defended (PD). This week’s matchup is not as tasty when the Broncos head to Foxboro, but the opponent has not seemed to matter so far this season for the third-year player, who leads the team in tackles to date.

Wright has been coming on of late, rebounding from his shoulder surgery, and put up an eight TT effort in Week 5 in Miami (six solo). He also contributed a trio of PDs and also forced a fumble (FF). He has a good matchup against the Vikings on tap prior to a Week 6 bye.

The Giant defense is spending significant time on the field, which means that if Fackrell can continue to see increased playing time on defense, his stat line should continue to improve. He has two sacks and 10 solo tackles over the last three weeks.  Note that Fackrell is listed as a DE only in the ESPN system.

Smith may not be available in your leagues, as he is the rare player this week with 50% or better ownership in ESPN and Yahoo leagues. He is taking advantage of his opportunity to collect tackles, coming off double digit TT in Week 4: 11 solo, two TFL, two assisted. He should continue to produce with Tampa Bay coming to visit this coming week.

Walker saw an increase in defensive snaps played due to injuries in the linebacking crew for the Colts last week, and made the most of his chance, collecting 11 TT (nine solo). He has the run-heavy Browns on the schedule in Week 5, and that bodes well for continued value in tackle-oriented IDP schemes.

The rookie is starting to show his value, picking up a strip sack in Week 4, to go along with three solo tackles. He is not seeing significant playing time, but expect that to change as he demonstrates his pass rushing skills going forward.

The Vikings have a couple of good to great matchups for Defensive End production on the slate, with the team heading to Seattle and then hosting the Falcons prior to the Week 7 bye. Ngakoue is coming off a five solo tackle effort (one TFL), where he collected a sack and a QH to pep up his big play value.

The first of our duo of 49er DEs profiled this week, Armstead is now going to be a target on defense for opposing offenses now that Nick Bosa is sidelined. Does not seem to be impacting his performance, though, as he racked up five TT (four solo, one TFL) against the visiting Eagles in Week 4, to go with a half a sack and six (!) QH. On the schedule is a good DE point production matchup against the visiting Dolphins.

As noted just above, Hyder has a great matchup this coming week, and he has accumulated sacks in three of the first four games this season. He also has 18 TT on the season, making him a dual production threat on defense for his fantasy owners. He is worth a second mention, having been profiled last week, too.

Williams is another DE that is providing value in both tackle-heavy and big play leagues. He has two sacks on the season, and has collected five TT in three of the four games he has been in this year. The Cowboys are a good matchup in Week 5 to boot.

The surgery that sidelined Budda Baker opened up a starting role for Thompson, who immediately demonstrated his value. He had nine TT against the host Panthers in Week 4 (four solo) and also added a PD to his stat line. He is a short-term pickup while Baker is out, and/or new signee T.J. Ward graduates from the practice squad.

Wilson stepped up in Week 4’s loss to Cleveland after the team sat Darian Thompson on the bench, and he responded with double digit TT (six solo, one TFL). Add in a sack and a QH, and he immediately becomes a valued IDP going forward.

The rookie leads the Panther defense with 35 TT to date, and has not collected fewer than seven tackles in a contest yet. He is strictly of value in tackle-oriented leagues, though, as his stat line has not yielded a big play so far.

Jones has collected the third most solo tackles at his position this season. With the injuries to top DBs mounting, he is a low-owned option to snag off the wire.

Thornhill has been an every down DB for the Chiefs, which is playing out well for his owners, limited though they be so far. He snagged his first INT in Week 4, with a PD, and also had six solo tackles in the contest. Week 5 shows up with a good matchup against the Raiders, who rank 10th on the season in terms of points allowed to opposing safeties.

Our lone cornerback in this week’s IDP Report, Sims stepped in when starter Mackensie Alexander took a seat with a rib injury, and in full time action, collected eight TT (six solo) and a PD against the visiting Jags. It will be tougher to come by points this coming week, as the tilt against the host Ravens will not be as promising for production, but full-time action holds promise.

Despite playing significant snaps on defense in Week 4, he came away with just one solo tackle, albeit one for a loss of yards. He is due to see a reduction in playing time with that level of production, and is not worth a roster slot.

Whitehead is another LB that is seeing his PT drop as the season progresses. You want to find the IDP that are seeing more time on the field, not less. Look elsewhere for linebacker depth.

The Dolphins are cutting back on his time on the field, and thus Baker is losing cachet as a useful IDP. He had a mere two TT in Week 4’s contest at home against the Seahawks, and Elandon Roberts looks to be the beneficiary of Baker’s declining usage.

No one to talk about in depth, just those who appear on the Injury Report below.

Apologies for profiling Love as a rising DB last week. If you took the advice to turn to him, you ended up with a big fat goose egg on the stat sheet. Playing just 30% of the snaps on defense undoubtedly contributed to his sad stat line, but his short-term value has run its course.

Remember, the first team listed is the one to use your IDPs against. Do not go crazy, and play a LB5 against the Washington Football Team, but certainly you will do well if you own a top LB or CB on the Cowboys, or a Raven DL or CB that you can plug in this week, for the most part.