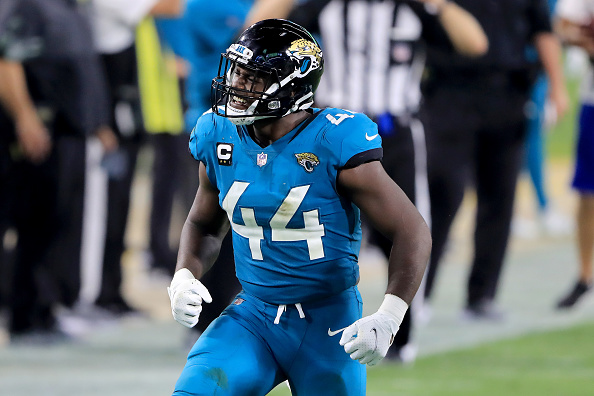 The first COVID issues spang up this week, with the Titans shutting down in-person activities for the present time. Their Week 3 opponent, Minnesota, has had no positive results, so that much is good. It does scramble things going forward, and now is the time to plan for backup help if you have Tennessee or Pittsburgh IDP on your roster.

The Jaguar linebackers are a bit banged up, and that has allowed Jack to finally live up to his potential. He has contributed 11 total tackles (TT) each of the first three games of the season, including seven solos against the Dolphins in Week 3.

An injury to starter Foye Oluokun thrust the rookie into full time action and he responded with an eight TT effort (six solo) with one of those for a loss of yards (TFL). He also had a QB hit/hurry and forced a fumble (FF) by the visiting Bears. Play him while he has the opportunity to shine.

Morrow’s production is due to diminish once Nick Kwiatkoski returns to action, but until then, he is likely to provide good tackle numbers. He is coming off a nine TT effort in Week 3 (seven solo).

He almost hit double digit tackles, racking up 9 TT (five solo) on the road at Indy in Week 3. He has a great matchup this coming week, heading into a contest at home against the Broncos who have allowed the most points to opposing LBs through three weeks.

The Bucs LB relieved some of his owner’s concerns by collecting a pair of sacks in Week 3, after going sackless the prior two games. He did see a probably unsustainable increase in sacks last season when he racked up an eye-popping 19, but he also contributes in the tackle department, with six TT (five solo, three TFL) against the Broncos last contest and a pair of QH. He has a good matchup with the Chargers on the schedule this week.

An injury to Christian Kirk sey thrust Summers into a full-time role for the Packers. He responded with nine TT (six solo). He is a IDP who can be slotted in while Kirksey heals up, but be advised that Green Bay is on bye in Week 5, so his utility may be short term.

White is now an every down LB for the Chargers, and picked up 11 TT in Week 3 (eight solo). So long as he gets the PT, he is worth employing as a LB2 or LB3 in your starting lineup.

The NFL sack leader has to lead off the DL category. He now has four sacks on the season, after his three-sack performance against the Seahawks. He should be well rested, too, not having played in the league since 2015. He is playing the majority of defensive snaps for the Cowboys, and is still owned in less than 40% of leagues.

A pair of sacks plus a FF/FR parlay makes Garrett a solid option at DL. He also forced a QH to go with his four solo tackles on the day against visiting Washington. This week is not the greatest matchup in Dallas, so temper expectations a tad.

Williams picked up another sack against the visiting 49er offense in Week 3, and a couple of QH. He stacked the stat line with five TT (two solo, two TFL) and now gets to face the middle of the pack Rams (in terms of fantasy points allowed to opposing Des) on the road in Week 4.

Nick Bosa suffered a season-ending injury, which opens the door for Hyder. In Week 4, he faces off against the Eagles and their less than stellar O-line, making for a great matchup.

Chase Young’s groin injury let Sweat step in to take up the slack, and he collected his second sack of the season against the Browns. Young’s injury is believed to be short term, so the focus will not be on Sweat on defense, opening him up to continue to pursue the opposing QB. He also had four TT against Cleveland last contest (three solo).

Allen’s time on the field has been increasing as the season moves forward, and he is playing like a DL2. He had a great week in Cleveland, snagging a sack and a QH, to go with his nine TT (seven solo, one TFL), making him valuable in all IDP formats.

Another DT with great playing time (PT) stats, the Titan defensive tackle had a sack and a pair of QH while in Minnesota, to add to his five TT (four solo, two TFL). Beware of the COVID scare with Tennessee that developed Tuesday, though, which could put Simmons out of contention in Week 4.

Coaching decisions in the Lions den are not always coherent or consistent, but at a minimum, the notion to return Walker to the field was a cogent one. He responded with a 12 TT effort in the road win against the Cardinals (10 solo). This week’s matchup is not ideal, but if he is seeing a majority of snaps, the tackle numbers should continue to be valuable.

With Jamel Dean shifting to the outside of the defensive backfield, Winfield gets an opportunity to slide in as nickel corner for Tampa Bay. He is coming off a consecutive one sack games, and also had a PD to go along with his six TT (four solo). He is a talent whose stock is rising and this is a good time to add him to your roster.

Whitehead is not burning up the stat sheet through three weeks of the season, but he has been collecting tackles (16 TT, 12 solo) as well as an INT and PD. Last week, against the Broncos, he also nabbed a sack, making him valuable across the board in IDP leagues of any format.

Rapp steps back in to the starting strong safety spot for the Rams, after his replacement, Jordan Fuller went out with a shoulder injury. He had eight TT (six solo) in his new role, and should be poised to return to his prior level of production, ala his 100 TT in 2019.

With Jabrill Peppers questionable for Week 4’s contest against the Rams, Love has another opportunity to show his value. He picked up 10 solos last week as part of his 11 TT effort at home against the visiting 49ers. He is a short-term solution if you are seeking a CB in your lineup.

As the Tampa Bay nickel corner, he has an opportunity to put up good numbers for a defensive back. He had eight TT in Week 3 (six solo). With Sean Murphy-Bunting questionable, he could see significant snaps at an outside CB position, with a chance to contribute in tackles and big plays.

The rookie cornerback rule comes into effect, as he is going to be tested early and often by opposing offenses. He collected nine solo tackles last week, along with a FF and a PD. Love to start rookie CBs whose team is prolific on offense, making the opponents have to air it out to keep pace.

Hilton wraps up the rising player profiles, and his star has been on the rise of late: 21 TT (19 solo), two sacks, an INT, a FR, and a trio of PDs over three games into the season. This kind of pace seems unsustainable, but grab him while he is hot. Beware, though, as the opponent is the COVID-stricken Tennessee Titans this coming week.

Clowney has underwhelmed so far for his new team in 2020, with just a pair of TT (one solo) in Week 3 in Minnesota. His ability to pick up the pace is in jeopardy in Week 4, as the specter of COVID hovers over the Titan team, threatening to shut down the team. Keep an eye on this situation.

A severe lack of production from the Raider linebacker is surprising, as he was expected to grade out as a LB1 this season. He had six TT (four solo, one TFL) against the host Patriots. He has the potential to turn things around any game, but for now, he is bench-worthy.

None to speak of, save for those listed in the injury report below.

Putting up a single tackle is just continuing a disturbing trend for the usually productive Nelson. He has just eight TT on the season, and has a couple of less than promising matchups on the slate, assuming the game against the Titans even occurs this week.

Remember, the first team listed is the one to use your IDPs against. Do not go crazy, and play a LB5 against the Broncos, but certainly you will do well if you own a top DL on the Jaguars, or a top DT on both/either the  Bills or Raiders that you can plug in this week, for the most part.