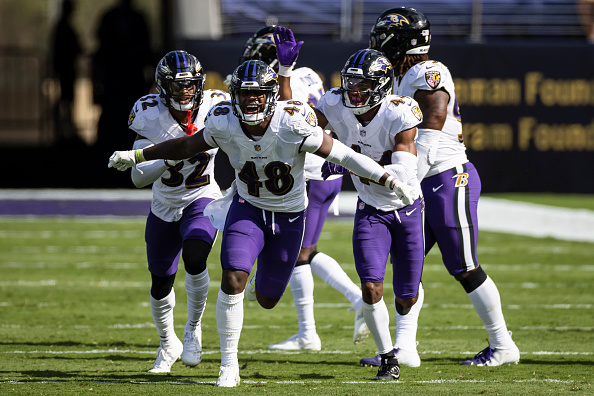 Whew, that was a lotta injuries in Week 2. Not totally unexpected given the limited training camp schedule and lack of preseason games, but still, woof. It is essential that as fantasy owners we make adjustments, and find replacements for those starting IDPs we were so excited that we landed in our drafts. Now the work begins…and the fun, to be quite honest.

Bye Weeks coming up: Do not concern yourself until Week 5.

Thomas racked up double digit total tackles (TT) with six each solo and assisted, one being for a loss of yards (TFL). He also contributed a QB hit/hurry (QH) against the visiting Falcons. He should continue to see plenty of snaps on defense with Leighton Vander Esch and Sean Lee both sidelined.

Van Noy was on the field for nearly every defensive down (95%) in Week 2, and managed to force a fumble (FF) against the Bills. He also had four solo tackles and a PD. He should continue to see plenty of game action, with corresponding fantasy production for his owners.

The veteran has never managed to stick around any team for long in his career, but he was nearly an every down LB in Week 2, playing 75 of the 77 defensive snaps against the host Cardinals. He had 15 TT (10 solo) along with a FF. He has a great matchup against Cleveland on tap, to boot.

Murray collected a team-high 10 TT against the Chiefs last week (six solo). He also had a PD in that contest. With Carolina coming to visit in Week 3, he has a decent matchup on the schedule to continue to provide tackle numbers for his fantasy owners.

Anthony Barr is lost for the season in Minnesota, which will thrust Wilson into an every down role on the weakside. The Vikings have been struggling to open the season, but will look to get things going in Week 3 against the visiting Titans, and that should allow Wilson to continue to produce, as he did when he collected eight TT (five solo) with an INT and PD against the Colts last contest.

Our lone DE this week, he is thrust into a bigger role due to the edge rusher injuries plaguing the 49ers. He gets to face the Giants, who feature a weak offensive line at best, so for short term production, he is primed to produce.

Oliver had a full stat line in Week 2: four solo tackles, one sack, two QH and a PD. Getting that production from a DT is incredibly valuable.

A second DT to consider picking up, he had five tackles two weeks in a row. The matchup against the Bears is not bad this coming week, either.

Simmons was a big-time producer in both tackles and big plays against the Steelers in Week 2, rolling up eight TT (seven solo, one TFL), with an INT and a pair of PDs as well. He has been a solid source of tackles over the past couple of seasons, and expect that production to continue as he plays out his franchise player season.

Amadi will benefit from the season-ending injury to Marquise Blair , returning him to the nickel back role he was expected to earn out of camp. He had eight solos (one TFL) this past contest, and should be in position to continue that production going forward.

Reid finally put up some impressive numbers, with 10 TT (eight solo, one TFL) against the Ravens. Even heading to Pittsburgh, this is a good matchup on tap for another week of good production by the Texan safety.

The rookie took the field in Week 2, and while he collected seven solo tackles, he was also attacked frequently. That in itself is a wonderful thing for fantasy owners to exploit, and until he adjusts, expect him to see plenty of activity in the coming weeks.

Another corner that is struggling to perform in his role, and that means plenty of potential fantasy production for the Viking starting right cornerback. He did pick up a sack against the Colts, to go with his seven solo tackles.

The 5’9” nickel corner for the Steelers is seeing considerable time on the field, and due to his size, draws a lot of attention from opposing offenses. Good thing for his fantasy value. Witness last week’s stat line: eight solo tackles (two TFL), a sack, two QH, a PD and a fumble recovery (FR). He has a great matchup in store with the Texans visiting Pittsburgh in Week 3.

Playing opposite Marcus Peters is likely to result in more action being directed toward the other CB on the field, and that showed up in Week 2. Humphrey had seven TT (six solo), a QH, a FF and half a sack against the host Texans. He has a good matchup coming up in Week 3 when the Ravens host the reigning champs, the Chiefs.

The Seahawk DB has 10 TT over his first two games of 2020 (nine solo), and also picked off a pass this past game and deflected a pass (INT, PD). He has a history against the Week 3 opponent Cowboys, so if you are stretched thin at DB, this is a fine time to snap him up.

Hill plays opposite Jalen Ramsey , which means he is getting plenty of opportunity to defend opposing receivers that are being targeted. He had eight TT in Week 2 (seven solo), and also contributed a couple of big plays with an INT and a PD. He gets to face the Bills this coming week, who are ranked as the fourth most generous to opposing fantasy CBs.

Despite playing nearly ¾ of the defensive snaps against the Browns, who ran the ball a ton in Week 2, he managed just a pair of tackles (one solo). Poor effort and decision making on the field is not worth an IDP starting role for fantasy.

Riley is not alone in poor production in the Eagle linebacking corps, but a goose egg in the tackle column against the Rams in Week 2 is certainly grounds to avoid using him going forward. If you are considering using a Philly LB in your IDP starting lineup, please reconsider, at least for now.

Luke Kuechly may be gone, which would seem to open the door for Thompson to excel, but that has not been the case so far. Week 2’s trio of TT (one solo) is a far cry from a LB1. Unless his run support improves dramatically, he is unrosterable.

Judon’s production has been down, along with his decrease in playing time as part of the Raven defense in 2020. He managed just one assisted tackle and a QH against the Texans in Week 2. He has been a sack producer in the past, but without enough PT to generate decent tackle numbers, he is worthless unless and until he starts producing big plays.

A huge zero in tackles this past week is certainly a sign that Allen has plenty of room to develop. Playing for the Jags is not exactly a stellar opportunity for his value to increase, although he is seeing plenty of snaps on defense. No sacks and only a pair of tackles in two games puts him on the sidelines for fantasy purposes.

Rapp is out as the starter in LA after a weak four TT (all solo) effort in Week 2. Note that two of those tackles came on special teams, making his effort even more pathetic. Instead of Rapp, look at 6th round rookie Kyle Fuller who is putting up far better numbers currently.

Murphy’s production has been putrid to open the season, with just three TT in two games, only one in Week 2 (solo). Before writing him off entirely, though, look to see how he performs against the Lion offense at home this coming Sunday. If the tackles are still mostly absent, time to look elsewhere for cornerback production.

Remember, the first team listed is the one to use your IDPs against. Do not go crazy, and play a LB5 against the Giants, but certainly you will do well if you own a top DT on either the Dolphins or Jaguars, or a Ram safety that you can plug in this week, for the most part.