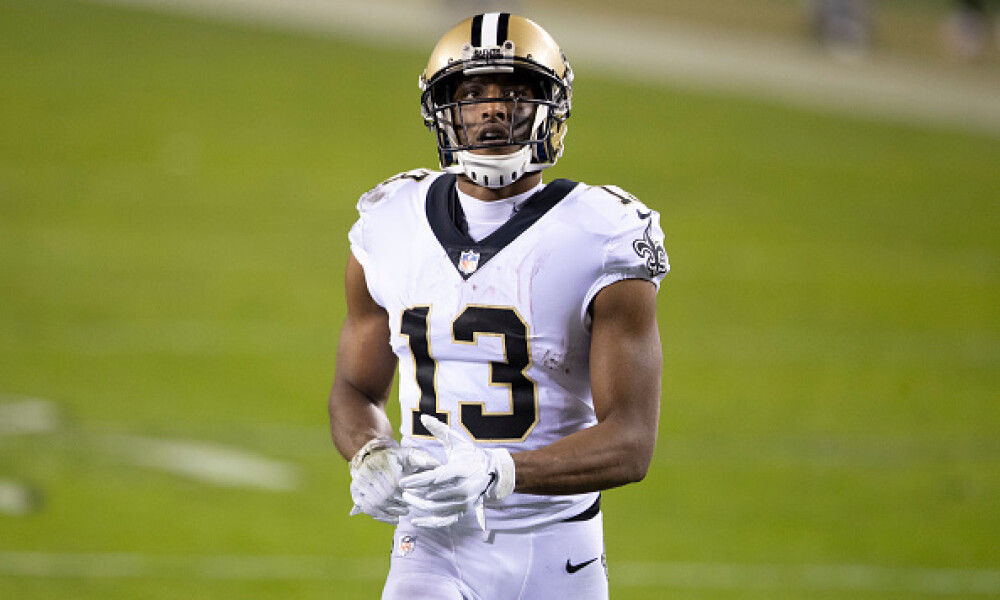 (See bottom for updates on Thomas)

After leading the league in catches in 2018, and then leading in catches and yards in 2019, Michael Thomas didn’t have the same 2020 season as years prior. A high ankle sprain in Week 1 kept him out for seven games, and he missed practice time in weeks following. He was limited to seven games (Started 5), and caught 40 of 55 targets for 438 yards and zero touchdowns. After back-to-back seasons of an 80+ percent catch rate, that mark fell to 72.7 percent in 2020. Drew Brees has retired, and Thomas will have either Taysom Hill or Jameis Winston throwing him the rock. Does that inspire enough confidence for you in the first two rounds of your draft? Let’s examine.

Using RotoViz’s team splits tool, let’s take a look at the New Orleans offense over the last two years when Drew Brees was in the lineup versus out of it.

Overall, the offense scored about a touchdown less, and on a points per drive basis, saw a decrease of around three-fourths of one point. That might not seem like much, but it is sizable and it’s worth noting nonetheless. When you look at some other metrics in the same scenario, there are some more notable differences that directly impact Thomas’ fantasy outlook for the 2021 season.

On a per game basis with Drew Brees on the sideline, the Saints threw it about four less times per game and for roughly 44 fewer yards. Conversely, they relied on the running game, notching about three more rushing attempts and 23 more yards per game. Especially with Brees, Thomas was hyper efficient with his targets, so his fantasy success wasn’t predicated solely on volume. Yes, he did get plenty of volume, and that helped, but his efficiency and rapport with Brees allowed him to make the most of his ample targets.

Yes, it’s a step down, but if you could extrapolate the 85.75 yards per game he posted without Brees in 2020 over a full 16 game season, it comes out to 1,372 yards, which would have been the seventh-best last year, coming in ahead of D.K. Metcalf and Tyreek Hill. The lack of touchdowns is an issue, but he’s the clear-cut alpha on this team.

While he gets a rep for only running slants (thanks to Carlton Davis), his 9.8 average depth of target (aDOT) was his highest mark since 2017, per PFF. However, his 2.14 yards per route run was his lowest mark since his rookie year, per PFF. It’s not that Thomas can’t get downfield, but they had to use him in the short to intermediate game because Drew Brees’ arm was deteriorating. Take a look at the adjusted yards per attempt from each of New Orleans’ quarterbacks last year, and notice how much higher it was with Hill at the helm.

Thomas is a route technician, but if he can start working downfield more, he’ll be even tougher to guard in the intermediate game. The star receiver produced quite well with Hill under center for those four starts in 2020. In fact, during those four weeks, Thomas was the WR14 in PPR formats, and ranked in the top 10 in targets (36), receptions (30) and receiving yards (343), per Pro Football Focus. If you take those four games and extrapolate them over a full 16 game season, it comes to 258 points, which would have been the WR10 last year!

To be fair, however, Hill’s four starts last year were against Atlanta (twice), Philadelphia and Denver, so outside of Denver, we aren’t exactly talking about cream of the crop defenses. Also, as expected, Thomas had his worst game with Hill in that matchup against Denver, catching four balls for 50 yards.

Yes, I’m providing a lot of positives for Thomas with Hill under center, but it’s not all lollipops and rainbows. Despite completing just under 72 percent of his passes, Hill threw just four touchdown passes during that span, and near the end zone, he relied more on his legs than his arm. If you take that four game sample from Hill, and apply it over a 16 game season, it comes out to 3,336 yards with 16 touchdowns, which would have been slightly better than 2020 Drew Lock (2,933 yards with 16 touchdowns).

Additionally, in those four starts, New Orleans ran the ball 52 percent of the time, per Sharp Football Stats, and when you look at other teams for the entire season, only Baltimore (55%) had a higher propensity to run the ball. It will be more imperative this year than ever before that Thomas is, and remains, hyper-efficient with the targets he gets.

If Jameis Winston is quarterback, he’s shown that he’s capable of supporting top fantasy wide receivers. Sure, there could be some inconsistency with him, but I wouldn’t say that either quarterback catapults Thomas to WR1, nor do they crater him to WR31.

Thomas is currently the WR9 off the board, at time of writing, coming in at pick 31 overall, meaning in 12-team setups, he’ll cost you a mid-third round pick. I think that’s great value for Thomas, and the perceived notion of Brees being gone is automatically a negative isn’t a rock-solid guarantee. He should experience better luck in the touchdown department this year, and double-digit touchdowns is well in the realm of possibilities.

Update (7/23): It is reported that Thomas is going to miss the first couple weeks of the season as he continues to recover the ankle issue that hindered him in 2020. This is a blow to his fantasy value, but before completely writing him off, wait to see what the expected timetable for his return is. He is going to slip in drafts a bit, so there could still be a buying opportunity, but you would be inheriting known risk before things even get going. Early reports say a couple months, so a mid-October return would result in a few missed games. For now, I'm dropping him outside my top 18 WRs, with the potential for fluctuation as more information is made available.