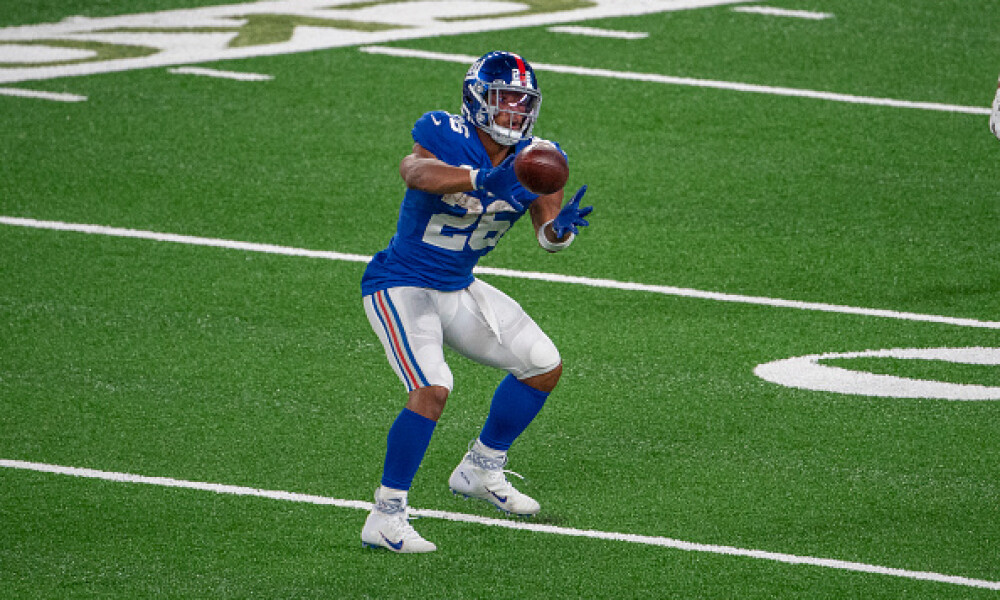 In what’s been a wild few seasons for the New York Football Giants, 2021 feels..different. Maybe that’s because there is a LOT riding on this season and maybe it’s because I’m generally optimistic, but things are just that. Things feel different because this is a make it or a break it campaign for a lot of different pieces, mainly the quarterback, offensive coordinator, and general manager and even to some extent, RB1 on the depth chart.

Things really hinge on how well Daniel Jones plays this season. I’m not sure how else to phrase it. He’s been bad at holding onto the football throughout his first two seasons, leading the league in fumbles (29) and hasn’t exactly made the best decisions through the air either, throwing 22 picks in 27 games.

That’s a LOT of turnovers.

All that to say, there’s potential here. We were very high on Daniel Jones last year because of his run/pass ability and there’s no reason to think he can’t tap into that. There were *some* things to like about Jones’ 2020. He was a top-five deep ball thrower according to PFF last season so what did the Giants do? They went out and got him a receiver in Kenny Golladay who has averaged a tick below 17 YP/Rec during his career.

Jones was 26th in aDOT last year, but Golladay’s presence should help that out some. He was 26th in adjusted completion percentage, but having an elite pass catcher like Saquon Barkley coming out of the backfield helps that out too. Can he avoid being sacked 45+ times again, however? Will his offensive line hold up? They didn’t do much to address the position at all and four of their five projected starters ranked in the bottom third amongst qualified players at their position, according to PFF.

Jones is being drafted as QB26 here and truthfully, with his ability to tuck it and run, he has high-end QB2 upside. I think there is a solid ceiling if his weapons can stay healthy and his young offensive line improves, but we saw how low the floor can be as well. He also, very obviously, has to limit the turnovers, especially in the red zone.

Will Saquon Barkley stay healthy for the entire 2021? Will he look like himself returning from a torn ACL and sprained MCL? That remains to be seen, but we know what he brings to the table when he’s healthy. Throughout this whole process, Barkley’s been a consensus first-round draft pick in fantasy football. He slipped a bit, into the second round, when reports came out that he may not be ready for the beginning of the year, but he was activated off of the PUP (physically unable to perform) list and the ADP began to rise once again.

The Giants threw the ball to the running back position just 84 times last year, which was the ninth fewest in the game. In 13 games in 2019, Barkley saw 73 targets. In 2018? That number was 121. Barkley is going to get a LOT of targets and that number should drastically change.

It’s a risk taking Barkley this year considering his ADP still suggests he’s a first-round pick. When assessing the situation you must ask yourself if the upside outweighs the risk. I personally prefer drafting him in the early second, where he’s been slipping on occasion, than I do using a first on him. Devontae Booker is the Giants backup running back and who you want to handcuff to Barkley if you’re an owner of Barkley.

This is an extremely interesting group. EXTREMELY interested. There’s a lot of talent, but they all have flaws. Kenny Golladay JUST returned to practice this week after an extended absence and hasn’t exactly been healthy throughout his NFL career. Sterling Shepard has had EIGHT injuries since being drafted that has forced him to miss time and has missed three or more games in three of the last four seasons. Evan Engram led NYG in targets in 2020, but had all types of issues holding onto the football, which has caused him to slip in drafts outside of TE1 territory.

Who should we be drafting? Here are there ADP’s;

With Golladay returning to practice, it’s only up from here. Daniel Jones, as mentioned earlier, is one of the best deep ball throwers in the league and Golladay picks up yards in bunches as he’s averaged 16.8 YPC throughout his career. The last time we saw Golladay truly healthy was the 2019 campaign. During that campaign, he was first in deep targets (37), fourth in air yards (1,826), sixth in average depth per target (15.7), and 11th in FP/target (2.1) according to playerprofiler. You’re getting tremendous upside on Golladay at WR37.

Sterling Shepard’s inability to stay healthy for a full season really caps his upside, as well as Golladay entering the fray as well as Saquon Barkley returning. Shepard’s someone who has a low aDOT and hasn’t been able to get into the end zone more than four times in a season for four straight seasons. He could be someone that generates close to 100 targets, especially with the injury history of Golladay and Barkley. We’re unsure how long Evan Engram will be out, too.

As mentioned in the last sentence, Engram’s battling an injury that could keep him out for an extended period of time, but there hasn’t been anything official just yet. The Giants have really remained tight lipped about how serious it is. Engram has the chance to be a TE1 this year and should once again push for 100-plus targets as long as he doesn’t miss a lot of time with this injury. He was fourth in targets amongst all tight ends last year and having guys like Golladay and Barkley in the lineup alleviates pressure off of Engram and should give him all the one-on-one coverage he can handle.

There are other guys such as Darius Slayton, Kadarius Toney, and Kyle Rudolph in the mix as well. Rudolph is great in line and figures to do a lot of blocking, but is also someone who has a knack of finding the endzone. Toney figures to factor into the return game before he becomes a viable weapon lining up in three wide receiver sets. Slayton, Daniel Jones’ favorite deep threat the past two seasons, will be taking a backdoor to Kenny Golladay considering the latter will take a LOT of the vertical work away from him. All are low level best ball options at best. Toney likely has the most “upside” depending on if/when he’s worked into the offense.

In this section, I’ll break down whether or not you get your drafting money's worth out of the Giants offense.

I think the Giants, mostly due to their defense, could be better than their 6.5 expected wins this year. It ultimately falls on the shoulders of the offense how far they can take this team. Can Daniel Jones take the next step? Can Saquon Barkley and Kenny Golladay stay healthy? Can Evan Engram hold onto the football? Is the offensive line going to be a viable unit? All questions we don’t have definitive answers to right now but will find out sooner rather than later. I could see the Giants winning eight, possibly nine games if the answers to these questions end up being yes.