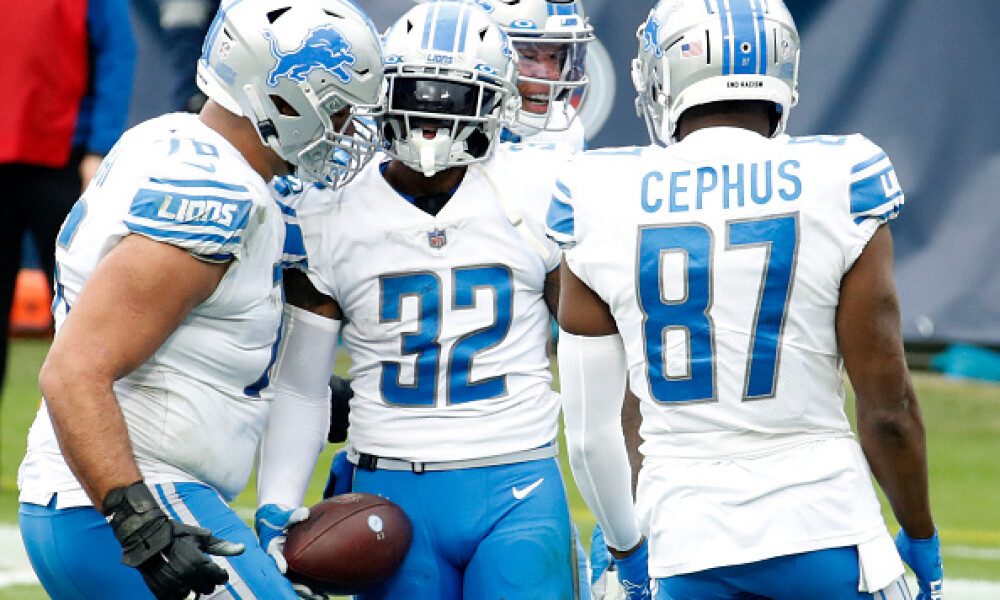 You may be asking yourself, “How did a 40-something year old heartthrob with a rocking dad bod from Long Island ever become a Detroit Lions fan?” Sadly, I have been asking that same question for over 30 years.

I guess I can both blame and thank my dad for this annual torment. Being from Michigan, my dad instilled in me a passion to cheer for one of the league’s longest suffering franchises - the Detroit Lions.  While most of my friends were “oohing” and “aahing” over Lawrence Taylor, Phil Simms and Mark Bavaro, I was left searching for my own personal Mufasa to lead the Lions pride.

Fast forward to the 1989 draft, when Detroit wisely selected Barry Sanders, otherwise known as “the greatest running back in the history of the NFL.”  That my sound uber superlative (sorry Emmitt Smith/Jim Brown/Walter Payton fans) and incredibly hyperbolic, but this is my “homer” article so deal with it.

Watching Barry Sanders magically juke and spin around inferior defenders was a thing of beauty. It was as if Mikhail Baryshnikov laced up his cleats and pirouetted up and down the football field. I proudly wore my Barry Sanders jersey to school and especially on Thanksgiving while watching Chris Spielman, Jerry Ball and Stephen Boyd eat turkey legs on television.

But you didn’t come here to hear me ramble on about how I love the Lions. The truth is my relationship with the Lions over the past ten years is “complicated.” In fact, whenever anyone asks me which team I root for on Sundays, I always chuckle and mention Detroit. The usual response I receive is, “no, really, Jets or Giants?”  It’s come to the point that my oldest son Holden has asked me if he can root for the Bucs in public (oh great, I’ve raised a front runner) but still privately root for the Lions at home.

If you’re still reading this article for my fantasy take on the upcoming season, I humbly thank you.

In short…don’t draft anyone from the Lions, outside of D’Andre Swift and TJ Hockenson before round 12…and even that’s being generous. Sure there is some value to be found in rounds 14-16, but if you are hoping to land a sneaky sleeper in the middle rounds, it’s best to look elsewhere.

Unfortunately for the Lions, their seasonal matchups don’t do them any favors, as they currently have the sixth toughest schedule in the league. In fact, their schedule is much tougher than their NFC North counterparts. The Vikings are 14th easiest, while the Packers are 21st and Bears are 22nd. Basically any way you look at it, the Lions have a challenging road ahead of them.

I can remember four times in my life that I cried as a Lions fan (surprisingly it wasn’t the year they went 0-16).

Jared Goff is the equivalent of plain, generic Cheerios that you would buy from Target. You know the Market Pantry brand. Nothing tasty or exciting whatsoever. No marshmallow rainbows or purple hearts (you certainly need a purple heart to be a Lions fan for over 30 years). No childlike tchotchke at the bottom of the box. Nothing! What you see is what you get with Goff, and what you get is the definition of mediocrity. However, with that being said, I still think Goff will do just enough to spread the ball around to all of his receiving options, limiting the ceiling for any of them to have a breakout year. Also, because the Lions are predicted to be trailing in most (or all) of their games, “Garbage Time” Goff will be forced to throw a lot in the second half.

Dare I say there is much promise in this position. It reminds me of the scene in Lion King when Rafiki anointed Simba as the heir to the throne. When I think of the potential that D’Andre Swift has as a running back in the NFL, it makes me want to put on my Lions jacket and smile like Axel Foley, from Beverly Hills Cop. For the past twenty years, the Lions have produced only three 1000 yard running backs. Three! Can you name them? I’ll save you the trouble. Reggie Bush, James Stewart and Kevin Jones. (Full disclosure, I’m actually wearing my Kevin Jones jersey as I type up this preview.) You see, for many, many years, the Lions management believed that literally anyone can play offensive line. Run blocking was not a top priority, so the running game has suffered. Barry Sanders literally had to improvise and react on almost every play in order to make something happen.

Swift should receive around 18 touches per game (12 rushes, 6 receptions), which would be ideal in a PPR format, considering there aren’t many other potential targets over the middle other than Hockenson. The much improved offensive line should also help Swift get close to eclipsing 1000 yards.

As a former Aaron Jones fantasy keeper league owner, I’m still plucking the Jamaal Williams thorn from my side. In real life, Jamaal Williams is the perfect complement to Swift; he is always a threat on the field with his ability to catch the ball in traffic and break tackles at ease. However, this fantasy vulture tormented me many times last year. Williams is the equivalent of Scar (I apologize for all these Lion King references). He will do whatever it takes to destroy the value of the rightful heir. I realize Swift doesn’t have the size to handle a full workload, but I pray that head coach Dan Campbell doesn’t commit to a 60/40 time split between the two.

For the past few years, Kenny G (when healthy) and Marvin “Berry” Jones harmonized beautifully on the field with Matthew Stafford as their conductor.

Apparently, the Lions believe Market Pantry Goff doesn’t need any extra frosting in order to succeed. By bringing in often-injured veteran receivers in Tyrell Williams and Breshad Perriman (son of former Lions’ WR Brett Perriman) on the outside, Goff will certainly have his hands full getting them the ball. On the bright side, I really like what I see from second year receiver Quintez Cephus and 2021 4th round pick Amon-Ra St. Brown, who should start in the slot this year for the Lions. Can St. Brown successfully take on the Cooper Kupp role in Detroit? Will Cephus take the next step in his development? I would be “lyin” if I didn’t say I was interested.

Geronimo Allison - I only included him here because “Geronimo” is what people yell when they take a leap of bravery. If you’re willing to draft Allison, you’re either incredibly brave or you like falling into last place.

I am really excited to see year three of T.J. Hockenson with Campbell as the head coach. He is quickly becoming one of the elite tight ends in the league and will certainly command a significant share of the targets. Also, it helps that Goff has a history of throwing to tight ends while playing in Los Angeles.  However, my main concern is that Hockenson will continue to receive double coverage over the middle of the field due to the lack of quality receiving options for Detroit. Still, I am confident Hockenson’s skill and talent will help him finish the year as a top 5 TE.

A position that often gets overlooked in the eyes of novice fantasy players. For many years, the Lions chose not to prioritize the offensive line, which is a main reason why only three running backs in twenty years have reached the 1,000-yard plateau. Now with Frank Ragnow and Penei Sewell anchoring the young line, there is reason believe Swift might become the fourth. They should also offer enough protection for Goff to throw the ball down the field.

Overall, in a 12-team PPR league, I’m willing to draft both Hockenson and Swift in the 4th round. Goff isn’t even a QB2 and most of the receiving options are free agent fodder. I am willing to take a chance on Amon-Ra St. Brown as a deep sleeper (round 14) as a speculative WR 5.