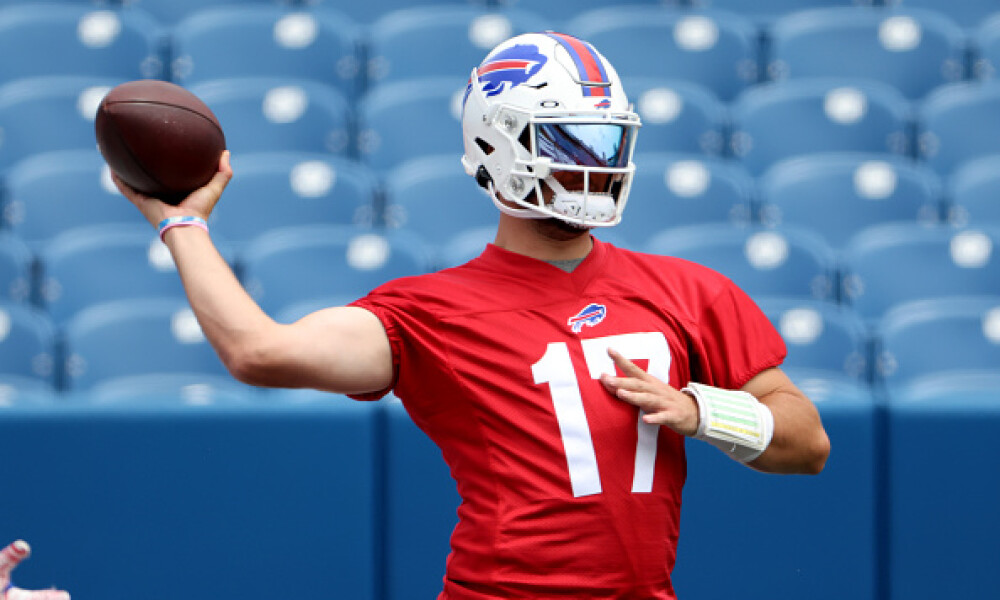 There is a constant tug and pull on what to do when drafting in fantasy football, especially at the quarterback position. Do I spend draft capital early on a QB or do I have some mid-and-late-round targets I’m going to wait on? There’s no right or wrong answer, except if you waited on QB in 2020. That was a joke, or was it? Back to the main point; there is no right answer, but we’re here to deliver ideas on how to approach drafting quarterbacks and strategies for both.

In every person’s home league, you’ll see not two, not three, not four, not five (shoutout LeBron James) quarterbacks taken in the first or second round. That said, that wasn’t a bad strategy last year with the current state of the position. It’s elite. With breakout campaigns from Josh Allen, Kyler Murray, and Justin Herbert, along with our consistent top performers such as Patrick Mahomes, Aaron Rodgers, Dak Prescott (before his injury), and Russell Wilson, it’s hard to NOT want to grab one of those guys because you can pencil in 20+ fantasy points.

According to NFC data, the top 13 scorers last year were quarterbacks. In both 2018 and ‘19, we had two skill position players crack the top-12. So what are some of the positives and negatives of both?

It’s also important to note that if a quarterback run happens early, don’t panic. Assess the situation. How many teams have a quarterback, how many need one, will there be value later on so I can bob while everyone else weaves? Maybe sure up the running back or wide receiver position that round. That’s where having a plan comes into play. Have a plan on where you are targeting specific guys at the quarterback position and don’t panic and reach for a guy just to fit in with everyone else that just took a QB.

This kind of circles back to what we talked about earlier, but until 2020, waiting on quarterback was and had been the fad. It has been that way because the most replaceable position has been quarterback. That’s why so many people stream the position. It’s easier to find a QB on the waiver wire than it is a skill position player. It was a staple of how many fantasy football players were drafted, but with the league catered around QB and so many young stars at the position, is waiting still worth it? Sure if you drafted Aaron Rodgers, Kirk Cousins or Ryan Tannehill last year, waiting paid off, but will you be that fortunate again?

There are A LOT of examples over the last few seasons that drafting your first quarterback in the later rounds of drafts is optimal, so to speak.

So as you see above, there are multiple cases a year in which waiting on a quarterback pans out. Obviously nailing the right one is the key. Daniel Jones and Carson Wentz, two popular targets in 2020, both drafted within the top-15 at the position, scored the 22nd and 24th most fantasy points in the league. Barely QB2’s.

It is worth noting that it matters what format you’re playing in. Quarterbacks will be drafted differently in standard leagues than they will be in SuperFlex leagues, which if you’re unfamiliar with them, allows you to start a QB at the FLEX. Ryan Hallam does a great job explaining SuperFlex formats here. In SuperFlex especially, quarterbacks fly off the shelves faster than toilet paper did at the grocery store when the pandemic first started.

This really goes without saying, but maybe someone needed to hear it. You should head into your drafts with a plan at each position, especially quarterback. Building out tiers and placing QB’s into the tiers helps. It’ll help you navigate the draft if QB’s are being taken early or you’re in a draft that they’re seemingly neglected, because if you play in multiple leagues you’ll encounter both.

I’m not here to tell you that drafting a quarterback early is right and that waiting on one is wrong or vice versa, but I am here to guide you through both scenarios to help YOU ultimately make your decision on what’s best for YOUR roster, once your research of the quarterback position is complete and you’ve started drafting.