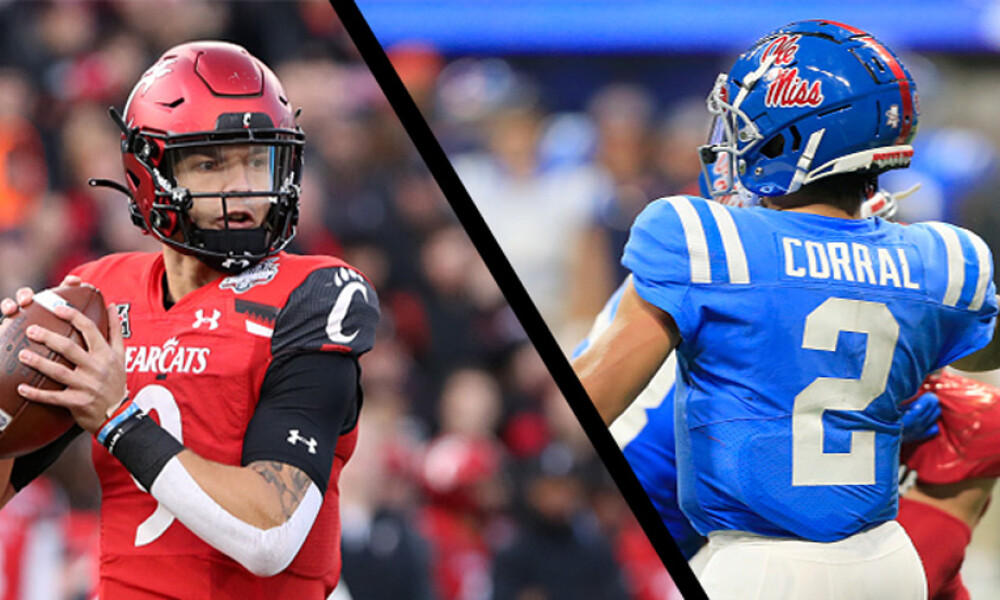 The NFL Draft is complete and it's time to hand out some draft grades for the NFC South! If you're getting ready for dynasty fantasy football, season-long leagues, or are just an NFL fan – it's important to know the incoming NFL rookies. Let's take a closer look at the 2022 NFL Draft before you dive into those mock drafts, best ball leagues, or dynasty fantasy football rankings. Here are the NFL Draft best picks, worst selections, and everything in between for the Atlanta Falcons, Carolina Panthers, New Orleans Saints, and Tampa Bay Buccaneers.

Many people (including myself) expected Ridder to get drafted in the late first round or early second. Instead, the Falcons got a steal in the third round with teams passing on both him and Malik Willis. At the very least, Ridder will be a solid backup as a rookie with a similar skill set to Falcons' new QB Marcus Mariota – high football IQ, dual-threat ability, and leadership qualities to run an offense. At his best, Ridder is Atlanta’s next franchise QB and only cost a third-round pick.

It makes sense why the Falcons drafted the Georgia TE with a later-round pick. They needed a blocking tight end to replace the retired Lee Smith and FitzPatrick is a strong run blocker with his 6-foot-7, 250-pound frame. We know Arthur Smith values these blocking tight ends in his run-focused offense, but the Falcons signed Anthony Firkser this offseason for that role. FitzPatrick is now at best TE3 in Atlanta – behind Kyle Pitts and Firkser – and his skillset is a bit repetitive of the latter.

The Falcons are still a year or two away from truly contending, but they addressed plenty of positions of need in this draft. WR Drake London is an ideal fit for an offense that needed a bigger, physical receiver on the edge – especially with Calvin Ridley suspended and Russell Gage gone from last year’s squad. Penn State edge Arnold Ebiketie was a possible first-rounder but the Falcons snagged him in the second. Montana State LB Troy Anderson is a raw talent but possesses a super-high ceiling with his athletic profile. BYU RB Tyler Allgeier can contribute right away in the Atlanta running game, and he was available in the fifth round.

After five defensive players went off the board to begin the 2022 NFL Draft, the Panthers had their selection of offensive tackles at No. 6 overall. Ekwonu had emerged in recent weeks as the best OL prospect over Evan Neal, and Carolina now has a long-term answer at left tackle. Figuring out the QB position is another issue (which we’ll get to in a second), but at least Ekwonu offers stability along the line.

Many thought the Panthers were primed to pick a quarterback at No. 6 overall, but going Ekwonu seems like the right decision there. Instead, they address QB later on in the form of Matt Corral. Maybe I’m on an island here, but Corral won’t be the answer under center for Carolina or any other NFL franchise. He wouldn’t be drafted this high in any other year but was pushed ahead on teams’ big boards because of a weak QB class. Corral likely won’t outperform Sam Darnold, or even P.J. Walker, when given the chance this year and the Panthers are probably in the market for a quarterback yet again next offseason. Plus, they gave up a fourth-rounder this year and a third-round pick next year just to trade up to draft Corral. Yikes!

Outside of Ekwonu, there’s not much to get excited about in this Carolina draft class. The Panthers admittedly didn’t have many picks at their disposal, to begin with, and probably should’ve worked some trades to acquire more draft capital for either this year or next. Edge rusher Amare Barno is an interesting prospect to keep an eye on, but he’ll need development.

Offensive tackle was a clear position of need for New Orleans after losing Terron Armstead in free agency. Trevor Penning easily could’ve been drafted earlier than No. 19 overall, but the Saints were able to get him with the second of their two first-round selections. He can be the left tackle of the future for a team trying to rebuild and reset with Sean Payton now gone. There are some questions about how pro-ready Penning is, coming from Northern Iowa, but his strength, physical attitude and blocking skills are evident from these highlights:

Yes, Chris Olave should be a stud in the NFL and adds playmaking and speed to a WR corps that lacks consistent talent outside of Michael Thomas. All that aside, look at the path New Orleans took to get Olave at No. 11 overall. Prior to the draft, the Saints traded next year’s first-round pick and a 2024 second to Philadelphia to acquire another first-rounder this year. Then, they moved up from No. 16 overall to No. 11 by giving Washington third and fourth-round picks this year. New Orleans could’ve stayed at 16 and taken Treylon Burks or Jahan Dotson, but instead, it traded away draft capital to get Olave – even with Jameson Williams still on the board at that point.

The Saints only made five picks in this draft – the second-fewest in the league – and three of those were within the first 49 selections overall. Though Olave and Penning should be anchors on offense for years to come, this isn’t a great haul for a team that’s stuck between rebuilding and contending. Fifth-round linebacker D’Marco Jackson is the wild card who could make this draft a win if he develops as planned.

The Bucs came into this draft still needing to replace Ndamukong Suh, Jason Pierre-Paul, and Steve McLendon from last year’s defensive line. Hall can step in and start right away while providing versatility to play either inside or outside. It remains to be seen whether Tampa brings back Suh or signs another vet on the D-line, but at least Hall fills a spot for both this season and beyond. Plus, the Bucs were still able to get Hall after trading back out of the first round and acquiring two additional picks from Jacksonville – sounds like a win to me.

I realize Camarda has a big leg and routinely bombed punts for Georgia’s National Championship squad. I understand he can also be a kickoff specialist after doing it well in college. I even know Camarda will give Tampa a cheaper, younger option over current punter Bradley Pinion. However, I’ll never get behind drafting a punter in the fourth round – especially for a team that’s trying to win a ring this season and could’ve had a quality player at other positions with that selection.

The Buccaneers had the tough task of both drafting to win now and building for the post-Tom Brady future – whenever that is. Overall, they did a good job of balancing both strategies with this year’s picks. Luke Goedeke is a solid second-round selection who can add versatility and depth along the offensive line. Cade Otton in the fourth round fills a need at tight end with Rob Gronkowski and O.J. Howard gone. Rachaad White was possibly a reach in the third round, but he gives Brady another pass-catching back and should form a nice 1-2 rushing duo with Leonard Fournette.