2022 NFL Draft: First Round Winners and Losers for Fantasy Football 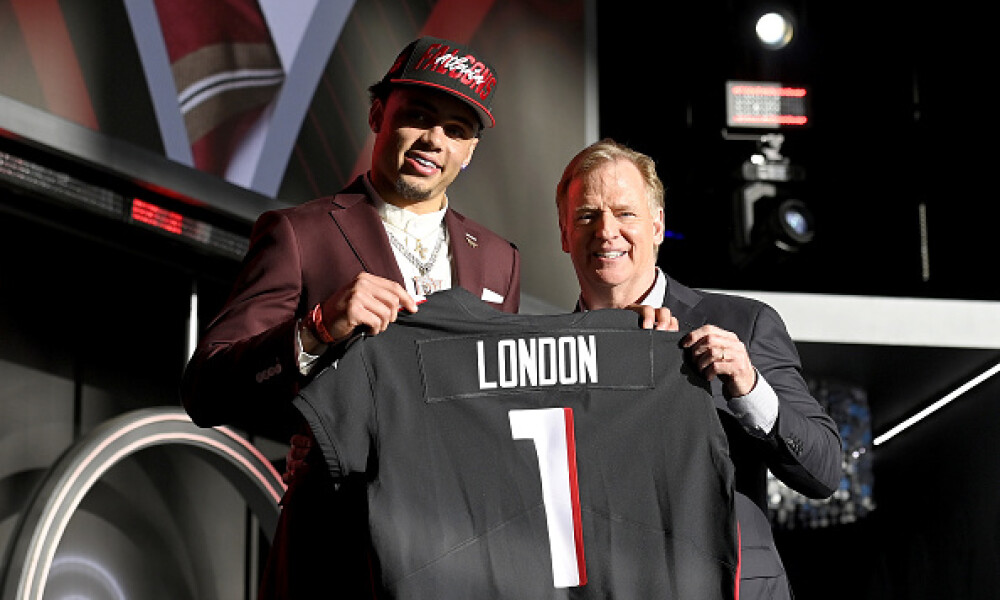 The 2022 NFL Draft’s first round is in the books, and now that we have landing spots for some of the most prized rookies coming into the league, we need to assess everything again. A few prized rookie prospects landed in ideal situations for fantasy football, while others may have some work to do to reach their true potential. So let’s look at some of the winners and losers from Day 1 of the 2022 NFL Draft from a fantasy football perspective.

Say what you want about Zach Wilson, but the Jets and general manager Joe Douglas are giving him weapons and putting him in the best position to succeed. Last season, the Jets fortified their offensive line with Andrew Cooper-favorite Alijah Vera-Tucker in addition to Wilson, Elijah Moore, and Michael Carter.

In 2022, Douglas brought in a haul of picks, including Ahmad “Sauce” Gardner and Jermaine Johnson on the defensive side of the ball. With their 10th pick (and final pick they received in the Jamal Adams trade to Seattle), they selected Ohio State wide receiver Garrett Wilson, who represents an immediate upgrade to the whole receiving corps and should pair well with Moore and Corey Davis.

Douglas has been aggressive with draft capital and providing weapons for his second-year quarterback. Wilson was #notgood in 2021, so he’s definitely going to have to step up in 2022. However, the elite ceiling is present as a second-overall pick, so you’re hoping for that giant leap in year two. The weapons installed give Wilson the ammunition to realize that potential.

As it stands, Wilson is a mildly intriguing redraft QB2 and an improved dynasty asset after Thursday’s first round of the NFL Draft.

The addition of Winston is a bit tentative in timing since the Saints have one more draft pick with significant enough capital at #49 overall. New Orleans added a wide receiver in Ohio State’s Chris Olave and then tackle Trevor Penning later in the first round. Both additions should solidify the team’s plans at the quarterback position for 2022 as long as #49 overall is not used on a quarterback.

Olave is a technician with smooth route-running and should pair well with a (presumably) healthy Michael Thomas to form a Buckeye connection. Add in Alvin Kamara, and Winston has a better situation heading into 2022 than 2021. Will that translate into fantasy football goodness? As a backend redraft quarterback and dynasty quarterback whose stock has gone up, it could be worse for Winston.

Yesterday’s depth chart (per Ourlads) for the Atlanta Falcons receivers read as follows:

Enter Drake London, who should immediately slot into a starting outside receiver spot for the Falcons for new quarterback Marcus Mariota. It’s undoubtedly a wasteland out there as far as a fantasy-friendly offense, but London and Kyle Pitts should be a huge (literally) tandem for Mariota, or whoever is quarterbacking this team in Week 1.

I say that because the Falcons still hold two second-round picks (43, 58) and two third-round picks (74, 82). With all but one quarterback (Kenny Pickett) falling out of the first round, there’s a chance that Atlanta could get their desired signal-caller at the beginning of the second round.

London should be a top-two receiving target for the Falcons alongside Pitts in 2022. A season where London amasses at least 100 targets is not out of the question. London’s arrival will lift up the offense, so defenses won’t be able to bracket Pitts constantly.

The Packers headed into the first round of the NFL Draft with picks #22 and #28 and came away with two defensive players - both of whom are unlikely to record a catch from quarterback Aaron Rodgers in 2022.

Look, I get the process of needing to get your players at a particular cost without reaching too high. But it’s getting ridiculous with the amount of wheeling and dealing that teams are doing for the wide receiver position these days that the Packers are sitting on the sidelines with a stubbornness bordering on foolishness.

Perhaps there’s a plan in place, but as it stands right now, Aaron Rodgers’ top targets include Sammy Watkins, Allen Lazard, Randall Cobb, Amari Rodgers, and Robert Tonyan. Not exactly a “murderer’s row” of weaponry for the back-to-back league MVP.

Several wide receiver prospects are still available, like Christian Watkins, Skyy Moore, Jalen Tolbert, and Alec Pierce - all of which would represent sizable upgrades for the Packers. Some of those options may not be there with Green Bay’s Day 2 picks at #53, #59, and #92. The team will need to be aggressive, which is not something the Packers have successfully done for skill-position players over the last decade.

There’s a lot of NFL Draft left, but it’s looking like the Packers will have to make do with what is left for them with their next picks if Rodgers is to get some wide receiver (or tight end) help. That doesn’t bode particularly well for the prospects of Rodgers in fantasy football, though he has lifted offenses without star players at times when an injury has struck. A full season of a suspect receiving corps doesn’t elicit a lot of optimism for fantasy managers, though.

Arguably the most polarizing fantasy football asset in the 2022 offseason, Amon-Ra St. Brown’s 2021 late-season surge (PPR WR2 from Week 12 until the end of the season) has been a focal point of conversations across the industry. Is his 2021 production repeatable in 2022? Are we seeing a breakout, or was his production smoke and mirrors thanks to fellow skill-position players suffering injuries?

Well, I’m not saying St. Brown is dead by any means, but the Lions trading up and selecting Jameson Williams at #10 overall isn’t exactly helping him out.

Adding Williams to the mix at such a high draft capital only muddies the waters for high-end fantasy production from St. Brown, who thrived when tight end T.J. Hockenson and D’Andre Swift were hurt last season. The Lions went out and signed D.J. Chark in free agency, so while he’s only signed for 2022, it’s still a hurdle that St. Brown has to overcome in Detroit’s target hierarchy.

Detroit’s over/under on team wins for 2022 is six wins, and the Lions were only a middling team in terms of pass-play percentage (59.6%, 12th in the NFL in 2021). With five skilled players all vying for targets, would Detroit move the 10th overall pick in Williams out of the way for the 2021 fourth-round pick that the team passed over multiple times in last year’s draft to select?

Will St. Brown be coming off the field when the Lions move to a two wide receiver set? That remains to be seen, but that’s what happened to CeeDee Lamb in his first two seasons in Dallas - and he was #17 overall in 2020! So would the Lions even think twice about doing that with St. Brown?

With the huge acquisition of A.J. Brown, the immediate question (at least for me) that I asked was: how will these targets be divided up in Philadelphia?

No team ran the ball more than the Eagles did in 2021, so there are already volume concerns for the pass-catchers. DeVonta Smith was selected 10th overall by the Eagles in 2021, so you know he will be a significant part of the passing game. Brown becomes the unquestioned top target in Philadelphia. That leaves Dallas Goedert in a murky situation as far as target hierarchy goes.

With Brown being such a target hog (27.6% target share in 2021) for the Titans heading now to Philadelphia and lesser but still significant target shares with Smith (22.6%) and Goedert (20.7%), something has to give. It’s going to take either a massive philosophical shift in Philadelphia’s run/pass percentages towards the pass, quarterback Jalen Hurts taking a giant leap up with his play, or a combination of both. Are the Eagles able to support three worthwhile fantasy football targets in this offense? 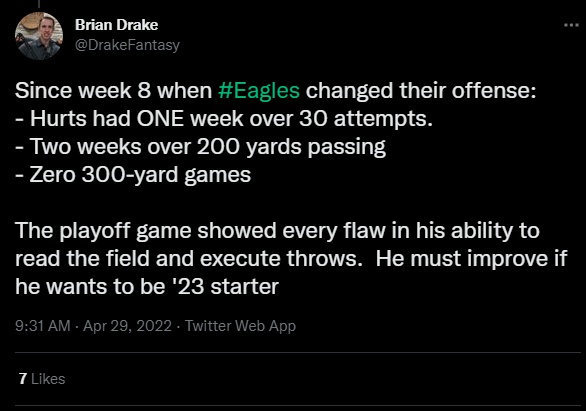 Brown seems like a lock for a high target share, and Smith has the edge over Goedert right now based on draft capital and upside. That’s not to say Goedert can’t be a worthwhile option, but his fantasy stock has dropped quite a bit from earlier in the week. It will take a hyper-efficient offense to keep Goedert at his TE6 average draft position (ADP) on Underdog Fantasy, so you’ve got to move him down a couple of spots at the very least. A 20% target share for Goedert might be a thing of the past.