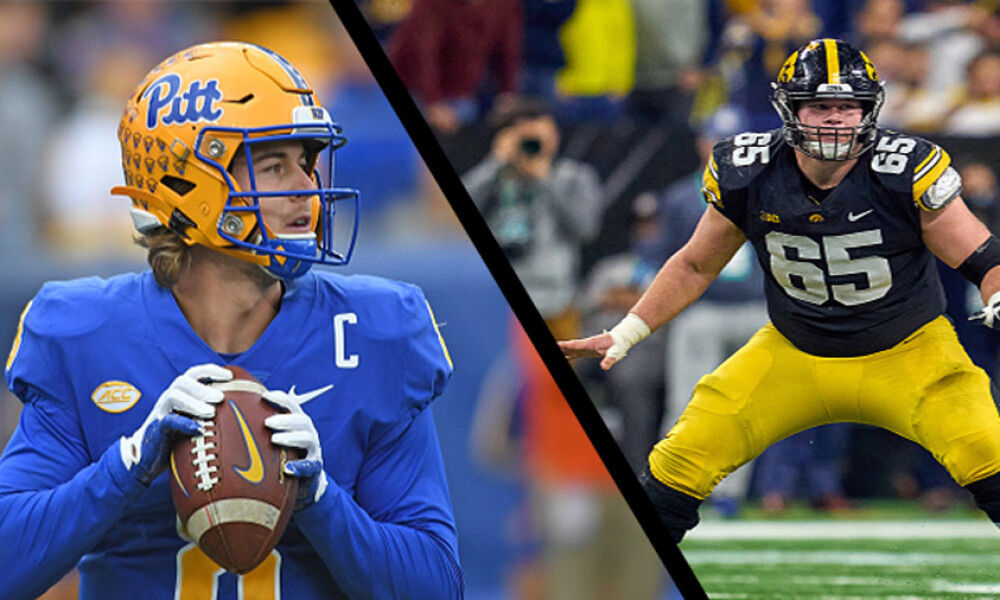 The 2022 NFL Draft is in the books and it's time to react to everything that went down! Whether you play seasonal fantasy football, NFL DFS, or are just an NFL fan – the draft is a time of optimism, potential, speculation, and dreams. So, before you get your fantasy football player rankings set and start preparing for those fantasy football mock drafts we have to ask ourselves some questions. What were the best and worst 2022 NFL draft picks for every NFL team? Which former college football players will make an impact in the NFL this upcoming season and more importantly the upcoming fantasy football season? What draft grades would you hand out? We're here to answer all of that and more! Without further ado, let's hand out some 2022 NFL Draft grades for the AFC North. Check out the best and worst picks for the Baltimore Ravens, Cleveland Browns, Cincinnati Bengals, and Pittsburgh Steelers,

In case you didn’t know, the Ravens are a run-first offense and the draft-day trade of Marquise Brown further exemplifies that. Well, Baltimore continued the theme by taking arguably the best run-blocking lineman of the class with the 25th overall pick they acquired from Arizona in the Brown deal. Linderbaum probably starts right away at center for Baltimore and he brings over some elite run-blocking skills. Ravens fans should be pumped to have Linderbaum manning the middle for Lamar Jackson.

Don’t get me wrong. Likely is a fantastic prospect and could eventually develop into one of the better pass-catching tight ends in the league. The Ravens, though drafted Iowa State TE Charlie Kolar just 11 picks earlier than Likely and still have Mark Andrews on the roster. Maybe they see Likely as a candidate to play out wide and replace some of Marquise Brown’s snaps, but drafting two tight ends in the fourth round of the same draft is questionable – especially for a team that has a Pro Bowler like Andrews.

The Ravens had 11 draft picks this year – including six selections in the fourth round alone – and they grabbed plenty of immediate contributors. Kyle Hamilton falling to No. 14 overall is a steal as a top-5 talent in the whole draft. Edge David Ojabo was available in the second due to injury concerns, but he would’ve been a first-rounder. DT Travis Jones was had in the third round and will fill a position of need for Baltimore along the defensive line. We could go on and on, but it’s impossible not to like all the potential.

The Bengals smartly added depth to a secondary that could lose both Jessie Bates and Vonn Bell to free agency next offseason. Hill has the versatility and athleticism to play deep as a coverage safety or as a nickel corner to trail slot receivers. Cincinnati is looking a year or two ahead with this selection, but Hill will definitely contribute right away as a rookie too.

Cincy’s offensive line was admittedly shaky last year, but it was addressed this offseason with the signings of Alex Cappa, Ted Karras, and La’el Collins. So, this pick of Volson is a depth add – but it’s tough to judge how productive he can be at the next level. Coming from North Dakota State, he simply didn’t face NFL-caliber talent in college and may need a year or two to develop. If the Bengals wanted to draft real depth along the O-line, using their second or third-round pick would’ve been a better strategy. Instead, Volson in the fourth is a tad risky for a boom-or-bust prospect.

The selections of Daxton Hill in the first and then CB Cam Taylor-Britt in the second will go a long way for a Cincinnati team looking to strengthen the secondary for this season and beyond. After that, though, the Bengals seemingly went “best player available” for the rest of their picks with nothing standing out. At least they addressed the defensive backfield, though.

Many people expected Winfrey to be drafted much higher, but the Browns were able to get him in the fourth round. Cleveland had a need at defensive tackle and Winfrey could form a nice duo with Myles Garrett along the D-line right away. He brings pass-rushing ability to the interior and his energy/enthusiasm has quickly made him a fan favorite. Just check out Winfrey’s confidence and excitement right after the Browns drafted him:

After the Browns traded back from No. 44, their first selection came at No. 68 overall and it ended up being a reach. Emerson barely cracked the top 100 prospect rankings for most draft experts and he likely would’ve still been available when Cleveland was on the clock at No. 78 or No. 99 overall. Plus, the Mississippi State product tested as a below-average athlete and ran a 4.53 in the 40-yard dash – not too ideal for a corner. If Emerson turns into an All-Pro defensive back, then it’s all moot. But, on the surface, it seems the Browns took him a bit too early.

Overall, take Cleveland’s draft with a grain of salt because of how many picks it gave up to acquire Deshaun Watson. Still, the Browns acquired a ton of talent and depth through the draft while also making multiple trades to bring in more picks this year and next. Edge rusher Alex Wright, along with Winfrey, adds even more firepower to the defense line. WR David Bell could start in the slot right away. The selection of kicker Cade York in the fourth round is a bit odd, but at least it was a position of need for Cleveland.

The Steelers needed to replace JuJu Smith-Schuster and they do it with George Pickens, who could’ve been a first-round pick. There are some off-the-field concerns surrounding Pickens, but Pittsburgh is a great landing spot with Mike Tomlin’s leadership and no-nonsense approach. In a couple of years, we could be looking back at this draft class and wondering how Pickens fell out of the first round. Just check out some of his college highlights while at Georgia.

It’s admittedly tough to find a “bad” pick in the Pittsburgh draft class. If we have to nitpick, though, Chris Oladokun seems a bit unnecessary for a team that drafted Kenny Pickett in the first round. Not to mention the Steelers already had Mitchell Trubisky and Mason Rudolph in the QB room before Pickett’s selection. So, Oladukun is likely just a practice squad player and probably would’ve gone undrafted if the Steelers didn’t take him in the seventh round.

Who knows if Kenny Pickett works out or not for Pittsburgh, but at least the franchise is trying to stay competitive for this season and beyond following Ben Roethlisberger’s retirement. The Steelers have a couple of underrated picks in this draft with wideout Calvin Austin III in the fourth and defensive lineman DeMarvin Neal in the third. Those are upside picks for a team that didn’t have many team needs coming into the draft. You also have to love FB/TE Connor Heyward joining his brother, Cam Heyward, in Pittsburgh.