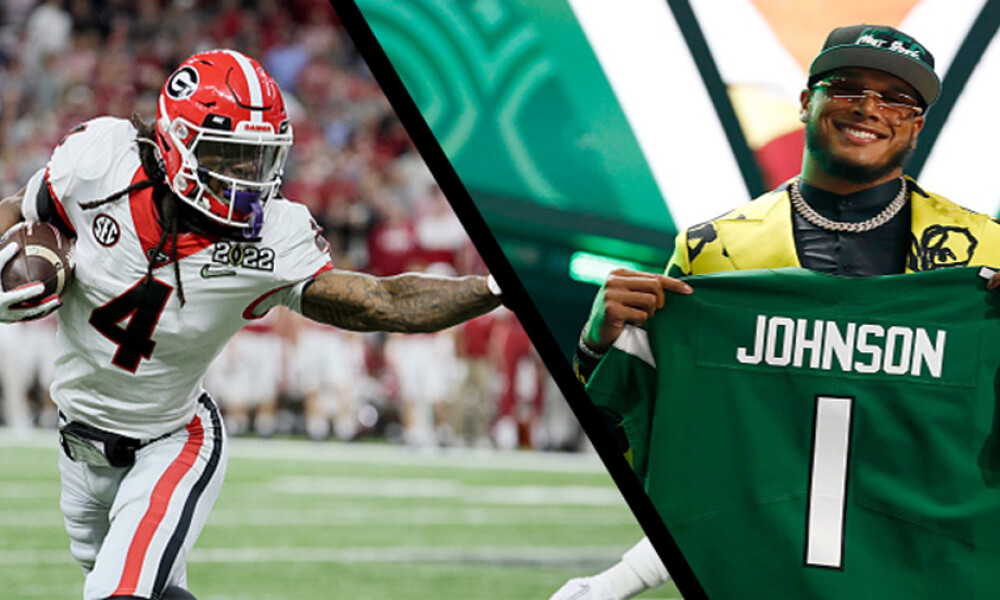 The dust is settling on the 2022 NFL Draft. As you start preparing for your fantasy football leagues this upcoming season, it's important to know about all the incoming NFL rookies. Before you start those fantasy mock drafts and dynasty leagues, we have to understand which new players will make an impact on both the offensive and defensive sides of the ball. Let's now take a closer look at how the NFL Draft ended up for the AFC East teams. What were the best and worst picks? What draft grades should we give the new rookie draft classes? Let's answer those questions and more for the Buffalo Bills, Miami Dolphins, New England Patriots, and New York Jets ahead of the 2022 fantasy football season.

Shakir was arguably a top-100 talent in this draft, but he slipped into the fifth round. Credit to the Bills for snagging him and giving Josh Allen another weapon on offense. Shakir should challenge Jamison Crowder for the starting slot job and brings a playmaking element to complement Stefon Diggs, Gabriel Davis, and Crowder in the receiving corps. The value is really nice in the fifth round for Shakir, who was a weekly stud at Boise State and could emerge as a reliable target for Allen.

The Bills have been successful on offense without a top-tier running back at their disposal – especially with Josh Allen running around on his own. Spending a second-round pick on an RB seems like a bit much for a team that’s been making it work with Zack Moss and Devin Singletary back there. Though Cook will bring some pass-catching ability and game-breaking speed out of the backfield, his skillset is similar to offseason signee Duke Johnson. Plus, Cook’s injury issues in college make the second-round pick a risk.

Buffalo didn’t have many positions of need coming into the draft, but they did add some guys who can help the team compete for a Super Bowl. CB Kaiir Elam brings depth and coverage skills to a secondary that needed to get better from last year. We mentioned the upside for Shakir as a fifth-rounder. Then there’s punter Matt Araiza, who’s nicknamed the “Punt God.” Yep, that’s a win.

It’s not often you see someone get drafted in the third round after not starting a single game in college. That’s Channing Tindall, who was a backup linebacker on Georgia’s loaded defense but still played a ton with a top-tier athletic profile. He brings speed and explosiveness to Miami’s LB corps and will make an impact right away on special teams. It’s an upside pick, but one that could be a home run a couple of years from now.

It’s tough to pick out a “worst pick” with the Dolphins only making four selections, but Ezukanma seemed a bit unnecessary in the fourth round. Miami is clearly trying to give Tua Tagovailoa as much weaponry as possible, but trading for Tyreek Hill and signing Cedrick Wilson this offseason could’ve been enough. Then there’s Jaylen Waddle and Mike Gesicki coming back as Tua’s top targets. The Dolphins also signed Chase Edmonds and Raheem Mostert in the backfield. Ezukanma won’t have much opportunity to make an impact as a rookie (barring injuries) and Miami could’ve used the fourth-round selection to address another position.

Miami made a league-low four picks after trading away a ton of draft capital for Tyreek Hill, and two of those selections came in the seventh round. So, we’re basically only grading for Ezukanma and Tindall – both of whom could develop into solid starters for the Dolphins down the line but are projections as of now. Not too much to get excited about, but having Hill is obviously a plus.

Death, taxes, and the Patriots drafting running backs. Even though Damien Harris, Rhamondre Stevenson, James White, and JJ Taylor are still on the roster, New England grabbed Harris in the sixth round after taking Pierre Strong Jr. in the fourth. It’s definitely a crowded room, but the Harris selection is great value for a guy that could end up being productive for this offense. Two years ago, the South Carolina RB was the SEC’s second-leading rusher and proved he can get it done against some of the top defenses in the country. A back injury and poor surrounding offense hampered his 2021 season, but the talent and bruising running style are still there for Harris to be a value in the sixth.

There’s just no getting around it. New England reached on Cole Strange in the first round. Maybe he develops into an All-Pro and maybe he ends up as the best offensive lineman in this draft class. Even still, the Patriots could’ve gotten him in the second or even third round. Instead, they used up a first-round selection on Strange when another position of need could’ve been addressed. The pick looks even worse after you watch what Ravens' third-round DT Travis Jones did to Strange at a Senior Bowl practice:

Who are we to question Bill Belichick at this point? Still, it’s impossible to ignore some of the reaches the Patriots made in this draft. Cole Strange and Tyquan Thornton both went much earlier than projected, four members of the draft class are 24 years old already, and Bailey Zappe in the fourth round is a bit unnecessary if Mac Jones is your guy for the future. Again, it’s Belichick and he knows more than all of us – but the haul is a tad underwhelming considering New England made 10 picks.

Tons of mocks had Johnson projected to go in the top 15 and possibly sneak into the first round. The Jets were rumored to be high on him before the draft but passed on taking him at No. 10 overall. Instead, they were able to trade back into the first to get Johnson as he slipped down the board. There are some questions surrounding the Florida State edge, but the upside is there for him to be a top-end pass-rusher at the NFL level.

Ruckert is a fine prospect, but the Jets didn’t need to spend a third-round pick on a tight end after signing both CJ Uzomah and Tyler Conklin this offseason. Instead, they could’ve used the selection to add depth to the offensive line or another position of need. New York also took Ruckert over plenty of other tight ends who went in the fourth round.

Jets fans must be ecstatic with how the draft turned out for their squad. New York nailed their two early first-rounders in Ahmad Gardner and Garrett Wilson, and then traded back in to snag Johnson. The Breece Hall selection in the second should help Zach Wilson develop even more now that he has workhorse RB behind him – and Hall was the top rushing talent in this draft. The only worry is the lack of offensive line additions as fourth-rounder Max Mitchell is more of a project. Still, the Jets were able to get arguably the top cornerback, wide receiver and running back in the draft class and Johnson is a top-5 edge.