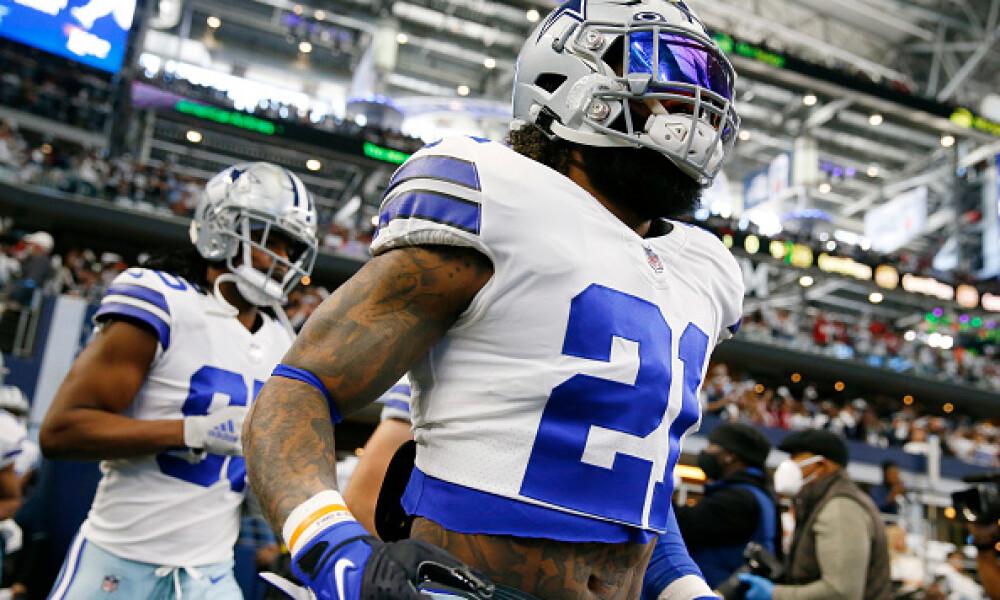 NFL free agency news has slowed dramatically but we are still a full week away from the 2022 NFL draft. So now is the best time to wrap up our deep offseason best ball series where we identify sneaky values that we see in the rankings of early best ball drafts. We’ve hit on quarterbacks, tight ends, and wide receivers already so now it’s time to look at everyone’s favorite position in fantasy football - the running backs.

Since we are looking for values, we’re not going to suggest Jonathan Taylor or Derrick Henry here - you literally need to take them with your first pick, possibly first overall. Instead, we are looking for guys that ANYONE can draft that are likely to generate value at their ADP (average draft position). As with the other positions in this series, we’ll discuss their individual talent, the opportunity in front of them, and the scheme the team uses to lay out how and why they are such great picks.

This is where folks are going to get bogged down with Ezekiel Elliott. Questioning his talent. They’ll say that he “lost a step” or that Tony Pollard is better. But the reality is that Zeke played almost all of last season hurt. He reportedly tore his PCL at some point in weeks four or five. And, through those first five weeks, he was the RB5 in fantasy football. In fact, in week four against the Panthers, he recorded the fast on-field speed that he’s recorded since Week 6 of 2016. So the reports of the demise of Elliott might be a little premature.

If Pollard was going to overtake Zeke, why didn’t he do it last year when he hurt his knee? And despite tearing his PCL, Zeke finished the season as the RB7 overall making him the only running back to finish as an RB1 in each of the last six years. Yes, he’s currently going off the board at RB18 despite never finishing worse than RB12 in the last six seasons. And the one time he did finish as RB12 it was because he was suspended for six games. That’s right - he played only 10 games in 2017 and was still an RB1 in fantasy. That’s the only time he missed more than one game in a season.

The idea that Pollard will overtake Zeke as the starting RB is largely a media construct. There are a lot of analytic folks that will point to efficiency metrics but a lot of times those don’t take into account the roles these guys have. For instance, here are the stats for each player last season on third or fourth down with three or fewer yards to go.

Not only was Zeke getting the majority of those carries but he was successful 21 of 25 times. Pollard was successfully four of six. Efficiency metrics often fail to capture that a one-yard run on third and one is a GOOD football play yet it actually hurts your “yards per carry” numbers. If Tony Pollard were ever the starter and he was actually being asked to run the ball up the gut on third and one, you better believe those efficiency metrics would go down.

But for now, that is Zeke’s job so Pollard will continue to get a bunch of gimmicky end-arounds that inflate his efficiency metrics and confuse folks into believing that they should hand the ball to Pollard, not Zeke, on 3rd and goal from the two-yard line.

The main reason Zeke holds his leash on the top RB spot is scheme-related. Not only is he better in the short-yardage situations like we just mentioned but he’s also better in pass protection. So not only is Zeke on the field for first down but he’s the more trustworthy back on passing downs and goal line. That doesn’t really leave a lot of space for Pollard to actually “split” the backfield and carve out a niche. It’s really no different than what we see with Nick Chubb and Kareem Hunt.

Chubb is the starter and gets all the high leverage plays while Kareem Hunt is the change of pace guy, like Pollard. In fact, Hunt plays more pass downs than Pollard. So why does Chubb (RB11) go so far ahead of Zeke (RB18) while Pollard (RB31) goes ahead of Hunt (RB33)?

This actually doesn’t need to be a big write-up because no one has ever really doubted the talent of Leonard Fournette. He was a high-end draft pick for a reason, he produced in Jacksonville, and he dominated in their Super Bowl-winning season so much that they named him “Playoff Lenny.”

No, the real reason the Jaguars didn’t want him anymore was likely based on him joking around on the bench while they were losing games or him punching a Bills player or him threatening fans, or him getting pulled over for speeding and/or illegal tint and not paying the fines so many times that he eventually actually got arrested. Stuff like that.

Here is the part that really confuses me. Ronald Jones is gone. Giovani Bernard and Ke’Shawn Vaughn are third-down backs at best and neither is better at catching passes than Fournette. Fournette is back on a three-year deal with guaranteed money that will keep him around for the next two years minimum.

With all those guys I just mentioned there last year, Fournette was the RB6 in PPR and he had the third most receptions of any running back. So why is he going off the board outside the top 25 running backs again?

A Tom Brady-led offense can create golden opportunities. In New England, they run a split backfield. They have now for the 20+ years that Bill Belichick has been running the modified Erhardt Perkins system. Yet Brady still produced an RB7 overall in PPR with James White in 2018 and an RB9 overall in PPR with LeGarrette Blount (even though Blount only caught seven passes).

So, if this team has Fournette doing the goal line work that led to LeGarrette Blount scoring 18 rushing touchdowns AND the bulk of the passing down work that saw James White get 123 targets, I’d say this is the exact kind of position you want your running back to be in. It’s only a matter of time before folks figure this one out so you better sign up for Underdog using promo code “ALARM” now and get him on some teams before his ADP skyrockets.

Well, guess who also played wide receiver in college? J.D. McKissic. In fact, here are the college receiving stats for the two players.

But that’s not the only reason McKissic gets passing down work. Let’s talk about opportunity.

Gibson has been in the league for two years now. In those two years, Pro Football Focus has graded him as RB117 and RB142 in pass blocking. For those keeping track at home, there are only 32 teams. That’s the other thing that gets McKissic on the field. Gibson is the early-down back and McKissic is the passing down back because he can be trusted to protect the quarterback and he can catch the ball like a wide receiver (which he is).

When we look at other backup running backs like Pollard and Alexander Mattison, they haven’t carved out a real solid niche or role. In best ball, we need spike weeks and, unless the starter gets hurt, you need a role of some kind to do it. That’s why McKissic was able to provide more spike weeks than both Mattison and Pollard last year despite only playing eight games. Here were the top five games for each player. Even the weeks at 10.8 and 11.7 points might not have been enough to crack your lineup.

Different teams handle situations differently. Based on everything we saw last year, the Commanders have a group that goes out for the two-minute drills and they don’t like to sub guys in and out unless there is a definitive stoppage. And that makes sense because subs take a while. If Gibson can’t be trusted to pass block he can’t be part of that group even if he would be the better player for some of those situations - there is no time to sub him in and out.

And that’s exactly why it was McKissic and not Gibson that got the rushing touchdown against the Giants in week two despite that being a goal-to-go type situation. McKissic can handle every situation if they call multiple plays in the huddle or audible at the line so he’s on the field for the two-minute drill. The Commanders were able to lure McKissic back despite offers from the Bills so you better believe there is a role for him on this team. Probably the same role he played last year when he was great in best ball.