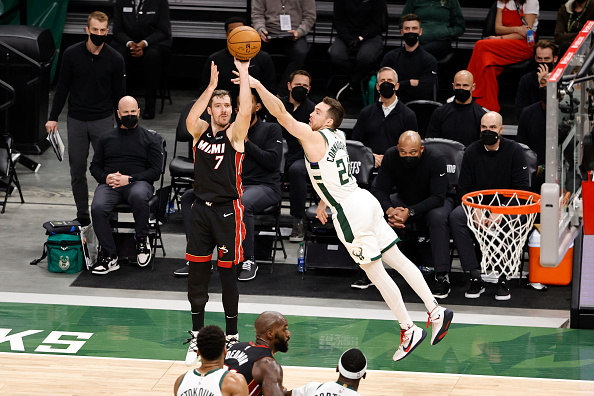 Welcome back to the Fantasy Alarm NBA DFS Value Vault! We have three playoff games on tap for tonight in the Association, so let’s see what kind of value we can plug into our lineups to get some of the stud names on the board!

The Lakers have really had no answers for how good Ayton has been so far in the two games that have been played in this series. Ayton has been a scoring machine dropping 20 and 21 actual in the last two, while also securing 10 and 16 boards, with a block. He has accumulated 37 and 44 DraftKings fantasy points for his efforts, and I see this being a similar result tonight.

If there has been one of the more consistent showings off the bench for the Heat, it is easily Dragic. Dragic has put up 27, and 31.5 DraftKings fantasy points in the first games of this playoff series against the Bucks. He has scored at least 18+ actual points, with two boards in each game, with five total assists and a steal. He should continue to remain a great source of scoring for this Heat team as the first reserve off the bench along with Herro.

Forbes absolutely torched the Heat in the Buck’s blow-out win in Game 2 of this series. Forbes saw 20 minutes in route to 30.3 DraftKings fantasy points on 22 points off of 8-for-12 shooting and six-for-nine from the three-point line, and also chipped in five rebounds to boot. Forbes is a volume shooter and will need his shots but being basically min-price on DraftKings he doesn’t exactly have to do a whole ton to meet value.

Campazzo continues to impress and has seen 30 and 31 minutes as the starting PG for the Nuggets in the series with the Blazers so far. Not only has he seen 30+ minutes in both games, he has put up 33.6 and 27.1 Fanduel fantasy points to as well. Campazzo has recorded eight-plus actual points in both games, with at least three rebounds, five-plus assists, two total blocks and FIVE total steals. The match up is top-notch against Portland once again.

Payne played extremely well in Game 2 of this series with Chris Paul still nursing a shoulder contusion. I don’t miraculously see the shoulder ailment just going away for Paul here, and Payne could once again be in-line for extended run. Last time out, Payne see a whopping 32 minutes of action and recorded 19 points, three boards, seven dimes, two blocks, and steal, which was good for 40.1 Fanduel fantasy points.

Going with another contrarian Sun’s pick here in Johnson, who has seen 26 and 22 minutes in the two games so far in this series. In game one, Johnson put up 10 points, grabbed six boards, dished a dime, and stole two balls in route to a modest 23.7 Fanduel fantasy point performance. He only mustered 11.1 Fanduel fantasy points in Game 2 in more overall minutes at 26 but failed to record any defensive stats in that game. I think we see him get the similar run of 22-25 minutes, and hopefully he adds some defensive stats here tonight.