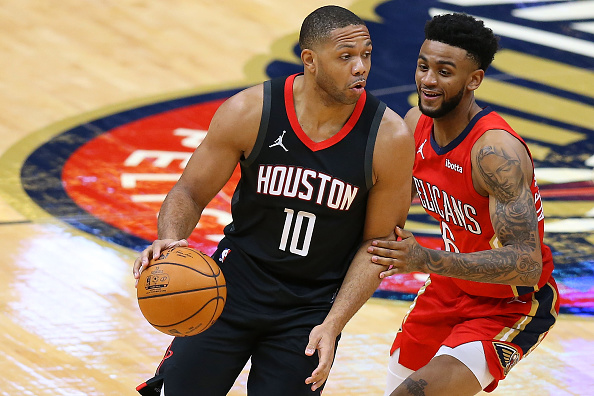 With Al Horford resting tonight, Roby slides right into both the starting lineup and 25 to 30 minutes of playing time. The Thunder are only projected to have nine players available for their match-up with Atlanta on Friday and with Mike Muscala the only center available off the bench, Roby should be busy. His last game in the starting lineup came on Monday, and Roby scored 12 points in 28 minutes of play while grabbing five rebounds. That was good for 20.5 FD points and in his last 10 games, Roby hasn’t scored less than 18.5 points so we have a pretty reliable floor. If everything breaks right for him tonight, 30 points is a possibility, so you have to like the upside for the price since it comes with a firm floor.

The fact that Gordon will likely be coming off the bench tonight as John Wall and Victor Oladipo are both in the lineup isn’t a concern to me. At his current price on FD (Gordon is $900 higher on DK and therefore off my list) a repeat performance of Wednesday’s game when he came off the bench to score 17 points in 34 minutes against Cleveland while grabbing two rebounds and two steals for 25 FD points would certainly be acceptable. For the most part Gordon plays close to 30 minutes a game while generally not straying too close to 20 and we know that scoring isn’t an issue for him. It doesn’t take much for Gordon to get hot and flash that 30-plus FD point upside, but even if we don’t see it, he should be pretty close to 5x value.

In 20 minutes of play on Wednesday, Valentine made good use of time as he filled the box score with 10 points, five rebounds, three assists, and three steals which was good for 29.5 FD points. You don’t want to make the mistake of expecting that on a daily basis but it is a good indication of what Valentine can bring to the table, and based on his price, we aren’t dealing with an exceptionally high bar. It figures to be a fast-paced game tonight against Phoenix with an over/under of 231, and Valentine is a very cost-effective way to get a piece of that.

While we generally want to target players with more upside at the point guard position, it is nice to see Winslow’s eligibility as he quite easily can fit in your lineup as salary relief. Since his return three games ago, Memphis hasn’t been shy in using him as Winslow has played 21, 26, and 22 minutes respectively while showing no ill effects. Winslow also hasn’t been shy in getting involved offensively as he is averaging just under 11 field goal attempts her game, and that type of volume certainly lends itself to upside (even if he only scored three points and 9.75 DK points in one of those games). In the other two games, Winslow put up 21.25 and 19 DK points and that is what we are setting our sights on tonight, but if the shot is falling, 30 DK points is a distinct possibility in a GPP scenario.

Barnes is not going to put up 42.75 DK points every night, but it’s nice to see that he is capable of doing so. In fact, it was Barnes’ fourth game of greater than 40 DK points this month and in playing 37 and 36 minutes in his last two games, there are no concerns about his playing time or his health after returning from a three-game absence due to a foot injury. Compared to his peak pricing earlier this month, Barnes’ salary is down $2,300 and it doesn’t take into account last night’s success either when he scored 22 points while grabbing seven rebounds and adding five assists. The forward is a key part of Sacramento’s offense and it’s hard to ignore him tonight.

As the lone true big man off the bench that can play the five tonight with Horford sidelined and Roby moving into the starting lineup, Muscala should be busy. This is the ultimate punt play at center position but on a normal night, Muscala generally plays around 20 minutes per night and comes in around 20 DK points as well. On occasion Muscala does flash some upside, but his season averages of 9.8 points and 3.8 rebounds per game provide an easy path to a 5x return, and with increased playing time, 25 DK points is a reasonable expectation.