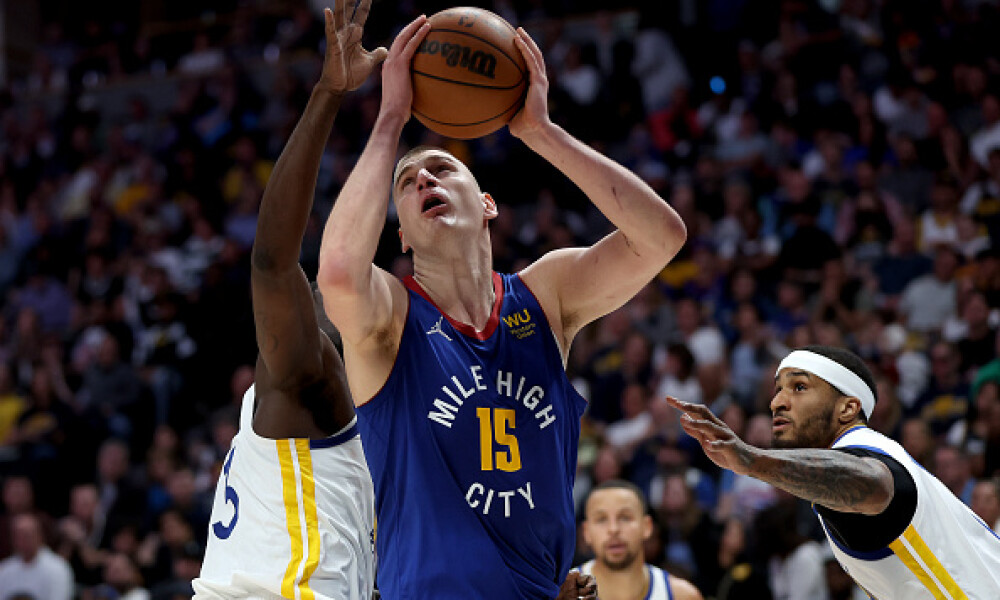 As we head into tonight’s two-game DFS NBA slate, the Chicago Bulls and Denver Nuggets are on the brink of being eliminated from the NBA Playoffs. Even with Khris Middleton sidelined for the Milwaukee Bucks, it’ll be very hard for the Chicago Bulls to defeat them without Zach LaVine in the lineup. The Denver Nuggets will need the Golden State Warriors to shoot very poorly in order to stick around in their battle. Here are tonight’s DFS NBA core plays.

The Bulls have lost the last two games of this series by at least 24 points and now Zach LaVine is in the league’s COVID protocols and won’t be available after scoring 24 points and dishing 13 dimes. The Bulls have major issues defending the paint and the Bucks took advantage by starting Giannis Antetokounmpo, Brook Lopez and Bobby Portis upfront last game. Antetokounmpo led all scorers by dropping 32 points. The Bulls simply don’t have an answer for him and he’s scored 27 or more points in three of four games. Since Middleton has gone down, Grayson Allen has been a strong contributor off the bench scoring 49 total points in his last two contests. Alex Caruso will also be inactive because he’s dealing with a concussion. It would be very surprising to see the Bulls extend this series to a sixth game. Patrick Williams and Ayo Dosunmu will see a major increase in action heading into tonight. They should both take more shots and certainly have more time with the ball.

The Bucks completely destroyed the Bulls last game and Giannis Antetokounmpo still played 35 minutes. He’s coming off of a 17-rebound game and has grabbed fewer than 16 just one time in this series. He’s shot over 50 percent from the floor in every game this series. With the Bulls missing key backcourt members, the Bucks should have an easy time with them, so know that if you roll the dice on spending up for Antetokounmpo, you could be paying for 30 minutes of playing time and he didn’t give us a strong return when he played 29 minutes back in Game 3. He took far fewer shots in that game than the others and as encouraging as it was seeing him log 35 minutes in last game’s blowout, now the Bulls are even more damaged and it would take a miracle for Chicago to keep this game competitive. He’s dropped seven or more dimes in each of his last three games. We don’t have many top DFS options to work with tonight, but there is a slight risk going in because he could lose out on minutes.

Is he shooting horribly? No, but DeMar DeRozan isn’t producing as many dimes this series but with the starting backcourt out, he’s looking at a usage percentage of over 36 and averages 1.23 fantasy points per minute with LaVine and Caruso off the floor. He should absolutely bring the ball up for the most part and there’s no reason to think he won’t take at least 20 shots. After seeing DeRozan take 31 shots in Game 2, it wouldn’t be shocking to see him shoot around 30 shots again. DeRozan has posted swipes in every game this series and he should play 40 minutes this evening with the Bulls season on the line. The Bucks going with a very tall frontcourt does post a threat because Antetokounmpo will be shadowing DeRozan for most of the evening, but even with the hard matchup, DeRozan will have a safe floor when it comes to production. He needs to stay away from the arc as he hasn’t hit a three-pointer this series.

Naturally, with Khris Middleton out of action, Jrue Holiday took more shots and played 37 minutes in last game’s destruction of the Bulls. Holiday took 21 shots and it’s safe to say that he should take 18-22 shots tonight. He’s steadily dropped six or more dimes in each game this series and he’s grabbed steals in three of four games in this first-round battle. After shooting under 38 percent in the opening two games in the series, Holiday responded by shooting over 47 percent from the field in Games 3 and 4. He’s even exceeded his 4.5 rebounding average from the season in three of four battles this series. The pace of play will be quicker with no Caruso shadowing Holiday and Holiday should see a good amount of high-percentage shots as the Bulls will look to put all focus on Antetokounmpo as soon as he has possession of the rock inside the arc. We saw Holiday shoot over 62 percent from beyond the arc last game and he’ll see a lot of open three-pointers once again.

Nikola Vucevic sees a near three-percent usage increase with LaVine and Caruso outputting his usage percentage with tonight’s active Bulls at 27.5 percent. After starting off the series strong by scoring 24 points in both Game 1 and Game 2 and grabbing 30 total rebounds, his last two games haven’t resulted in as much production. Vucevic played 38 minutes last game and with no LaVine isolation draining the clock, more plays should be called for him whether they’re in the post or from long-range. Vucevic has taken six or more three-pointers in every game in this series. He’s posted a double-double in three of four games and we should see him take 16-21 shots tonight. Vucevic produces 1.27 fantasy points per minute with LaVine and Caruso out. He’s also blocked shots in three games versus Chicago.

Bobby Portis is coming off of a bit of an underwhelming performance despite posting his third double-double of this series and he should once again play over 30 minutes tonight. The Bucks shouldn’t have any problems disposing of the Bulls and if and when the Bucks decide to pull him and Brook Lopez, Portis will get a lot more action in the post. With the skyline lineup that Milwaukee is putting out there, the Bulls will have to collapse on Antetokounmpo and Lopez will be the bailout shooter at the arc, meaning that as long as Portis is cutting to the basket as soon as Antetokounmpo receives possession of the ball, he should score more from right under the basket. Portis has taken 12 or more shots in both of his last two games. Between Lopez's health issues and the fact that they won’t want to risk their superstar’s health in Antetokounmpo, Portis could remain on the floor to shut the door on Chicago.

The Nuggets' survival in this series all comes down to Nikola Jokic who has been majorly productive in this series. The Nuggets staved off elimination in game four by shooting very well from the field, but the inconsistent production throughout the series from other Nuggets players have made it hard to get a good read on who can be relied on for wagering or even DFS. Aaron Gordon has been a lot more helpful in the last two games, and we saw Monte Morris and Bones Hyland be especially productive last game to keep Denver in this series. For the Warriors, we should see an unrestricted Stephen Curry meaning more shots and certainly the time of possession will go his way and that could take the ball out of Jordan Poole and Andrew Wiggins’ hands more.

If we’re deciding to spend up for Nikola Jokic versus Giannis Antetokounmpo, we have to go Jokic being that the last two games in the Warriors-Nuggets series were close as opposed to the Bucks-Bulls series. Jokic scored 37 points in both of his last two games. He’s produced three double-doubles in this series and there aren’t many other players on Denver that we can trust to put up offense consistently. Jokic has carried this team all year and he’ll have to do so once again. He’s taken 20 or more shots in every game against the Warriors and he’s posted seven total steals during that span. He’s shot over 63 percent from the field over his last couple of games and even though he’ll be heavily rostered, our builds have to start with him because it’s an elimination game and he should play 37-40 minutes no matter what the score is. As good of a defender as Draymond Green is, Jokic is one of the toughest assignments in the league to cover.

We’re being told that Stephen Curry won’t be restricted at all when it comes to his playing time and after seeing him score 33 or more points in two of his last three matchups, we should expect Curry to once again hit the 20-shot mark and play close to 40 minutes. Curry has also increased his assist-production as the series has continued dishing six or more in both of his last two contests. He’s coming off of a four-steal game and he’s stolen the ball in all but one game in this series. He’s shot over 51 percent from the field this series. Curry realized last game that he needs to change it up and drive more when the threes aren’t falling. Even the best pure shooter in NBA history can have a few off-games, but Curry has quickness and agility and he’ll draw contact in the paint. He shot 14 free throws last game and should once again look to attack the paint more. He’s shot under 34 percent from downtown in his last two outings.

Aaron Gordon has a very hard matchup battling against Draymond Green. Green provides suffocating defense, but he’ll also have to keep an eye on Jokic when he enters the post and constant switches could once again work in Gordon’s favor. If you look at the other Denver options, Gordon has at least given us back-to-back games of consistent production and he’s taken double-digit field goals and scored 18-plus points in both of his last two battles. Gordon has also exceeded his 5.9 rebounding average he posted in the regular season in his last two contests by pulling down 18 total boards. He’s also blocked shots in each of his last three games and has played 34 minutes or more in both Game 3 and Game 4.

Unlike Curry, Klay Thompson is scorching hot shooting from beyond the arc in this series – hitting over 63% of his three-pointers. He’s hit five or more three-pointers in three games this series against Denver. Thompson has scored 24.5 points per game this series and even though we’re paying mainly for points, he hit over 55 percent of his shots in both of his last two games. Thompson did block shots in two of his last three battles and we should see him play mid-30s minutes tonight. Expect Thompson to take 17-22 shots this evening. He’s given us a 5x return on DraftKings in game three and game four and we can ride his hot shooting until it falters.

The Warriors will need every bit of Draymond Green’s defensive tenacity to try to limit Jokic enough that the Warriors can close out the series. Green is coming off of a double-double in which we saw him grab a handful more boards than he has in any other game this series. He should once again play 34-plus minutes and he actually contributed 9 or more assists in two of four games in this series. Green has posted three straight multi-steal outings. His scoring is the one thing we have to constantly question as he’s hit double figures in half of the games in this first-round battle, but he produces enough in other areas to make up for it and even though he won’t take many shots, foul trouble is the only thing limiting him from playing deep into this game. He’s the heart and soul of the Warriors' defense.