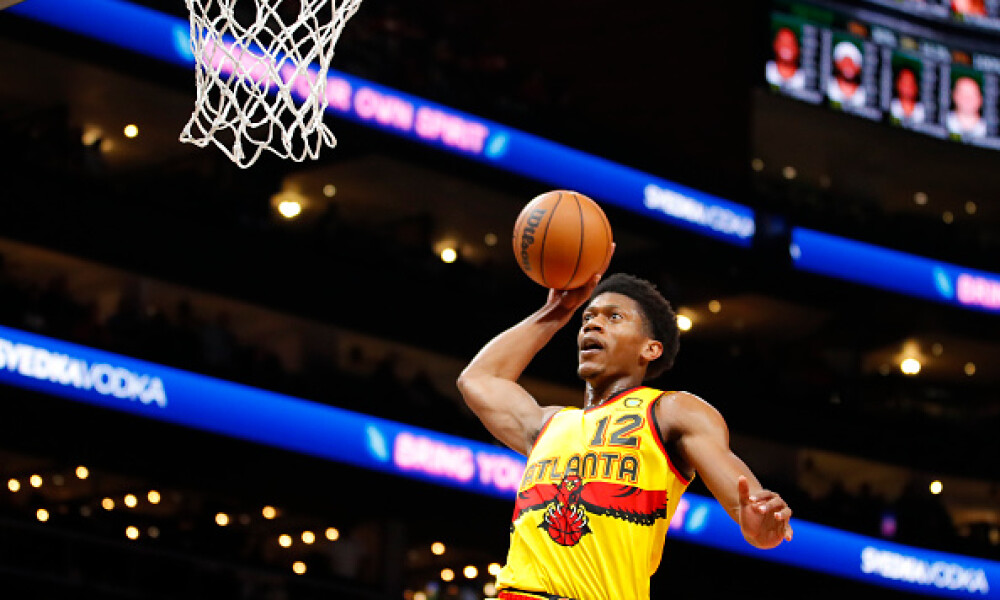 Continue to look more at stats from the last two weeks than the full season when it comes to finding which players to pick up off of the waiver wire in fantasy basketball leagues. That’s how you find hidden gems out there and it allows you to stay one step ahead of the game. Look for players who give two or three strong games in a row rather than seven or eight, especially if that player is filling in for an injured teammate. Short-term solutions have a place on your roster and it’ll make your team stronger if you leave a spot open to pick up trendy NBA players.

De’Andre Hunter F ATL-40% Rostered: Hunter returns to action after having Wrist surgery and he returns to a Hawks team that has had a revolving door of players getting hurt kind of like last season. One player who Hunter won’t have to compete with for shots is Cam Reddish as he’s been traded to the Knicks. Hunter took 11 shots in 24 minutes against the Heat in his return to action scoring 15 points and he averages over 11 points per outing. He shoots over 44 percent from the field, but what’s more impressive is his long-range shooting, as he’s hit nearly 43 percent of his three-pointers. The Hawks need all of the midcourt help that they can get and Hunter returns at a perfect time as there will be room for him to shoot and he’ll be prioritized in the rotation over Danilo Gallinari.

John Konchar SG MEM-2% Rostered: Dillon Brooks hurting his Ankle and pissing the next few weeks of action keeps Konchar playing 25-30 minutes in the Grizzlies rotation. Since returning to action after being in the league’s COVID protocols, Konchar has played 22-plus minutes in 2 of the 3 games he’s played in. He’s pulling down over four boards per game and he’s coming off of a 17-rebound game against the Timberwolves. He’ll be in competition for shots against De’Anthony Melton and Desmond Bane, but there’s still room for him in the Grizzlies rotation as they have to rely mainly on their guards to carry the offensive burden. He’s an excellent shooter when given the shots and he’s shot over 56 percent from the floor this season.

P.J. Tucker PF, C MIA-24% Rostered: He’s healthy and even with Bam Adebayo coming back soon, Tucker will still play heavy minutes in the Heat’s rotation. We don’t know when we’ll see Markieff Morris return to action. He’s scored in double figures in three of four games since returning and he’s swiped multiple balls in his last two games. Tucker is an excellent defender on the perimeter and in the post and he’s often set up for the spot-up three on offense. He’s grabbed seven or more rebounds in each of his last three games as well. The Heat get a lot of Atlanta coming up on their schedule and they play very poor defense and don’t do the best job keeping opposing big men out of the post, especially with a hobbled Clint Capela. Tucker’s spot in the Heat’s rotation is safe.

Jae Crowder F PHX-23% Rostered: After clearing the league’s protocol, Crowder has taken his rightful spot back in the Suns rotation. Jalen Smith did a good job filling in when called upon, but Crowder’s tenacious defense is very much needed and it was encouraging seeing him play 35 minutes last game and scoring 19 points. He’s grabbed six steals combined in the two games he’s played in since returning to action. Crowder will be utilized mainly as a bailout option when one of the guards or Ayton gets collapsed on inside when driving the lane and Crowder is often open for high-percentage shots. He’s grabbed five boards in both games he’s been active in since rejoining the team. He nails nearly two three-pointers per game and he’ll take eight to nine shots per contest. His minutes alone give him a safe floor and he deserves a spot at the end of your fantasy bench.

Trey Lyles PF, C DET-19% Rostered: This could be the end of the lane as the Pistons just acquired more size and that could clog up an avenue for Lyles to get minutes, however, with Jerami Grant still out, we should see him toggle between PF and center and he’s scored in double figures and grabbed at least six boards in five of his last six contests. He’s even swiped balls in three of his last four games and he continues to play 25-30 minutes per night. Kelly Olynyk coming back soon could pose a threat, but he’s more of an offensive threat and Lyles can be utilized as a reserve defender as Isaiah Stewart is still raw and the Pistons can use a veteran presence in the post. He can help stretch the floor and seeing Lyles receive 10-plus shots in 4 of his last 6 contests is encouraging that until the other forwards come back, he can stick in this rotation.

Royce O’Neale SG, F UTA-39% Rostered: O’Neale is another safe floor player when it comes to playing time and he’ll continue receiving over 31 minutes per game for the rest of the way. He’s versatile and can play multiple positions. He doesn’t always score I double figures, but he does just enough in other categories for all of the production to add up to make it worth rostering O’Neale. He’s pulled down six or more rebounds in three of his last four outings and he’s grabbed five steals total in his last two contests. He’s even swatted away shots in three of his last five games. Good defense translates to more playing time in the NBA and O’Neale has played no fewer than 35 minutes in each of his last 4 games. If his rebounding drops, feel free to re-release him.

Dennis Smith Jr. PG POR-12% Rostered: Anfernee Simons plays a lot of minutes, but with Damian Lillard and CJ McCollum still out, Smith does hold value. It obviously increases when Simons is also out of action like it did the other night when scored 17 points and dished 8 assists. View Smith not as a must add at this very moment, but a speculative add, because the Blazers main guards won’t be back for a bit and the Blazers need all of the help they can get moving the ball. Smith has produced steals in each of his last five games. If you have a shallow bench, keep him on your watch list because he hasn’t been hitting the 20-point mark, but he has dished 3 or more assists in 7 straight games. Despite not playing 20 minutes regularly, he’s taken 8 or more shots in 3 of his last 4 games.

Nassir Little SF POR-19% Rostered: Based off the production we’ve seen, Little could be the more appealing Blazer to grab between him and Smith because he’s played over 30 minutes in 5 of his last 6 games and he’s pulled down 5.6 rebounds per game. Norman Powell being in the league’s COVID protocol gives Little more room to breathe in the rotation and with the backcourt injuries Portland is facing, expect Little to continue to be a committed member of their rotation even when Powell returns. Little has also recorded blocks in three of his last five outings. He’s been getting nine or more shots regularly in recent games and he’s hit multiple three-pointers in each of his last six battles. Little has hit double figures in scoring in five of his last contests.

Lance Stephenson SG, SF IND-35% Rostered: No, we’re not in any kind of time machine, the Pacers have been dealing with major personnel issues and Stephenson has taken full advantage. He’s taken 11 or more shots in 4 straight games and scored 14-plus points in 3 of those outings. He can hit threes but let’s not forget about his agility and driving ability. Malcolm Brogdon being in and out of the lineup has worked to Stephenson’s advantage and he’s run the point a bit and has dished five or more dimes in three of his last four outings. He’s played over 20 minutes in all games during that stretch and he’s even produced 6 total steals in his last 3 games. He’s even exceeded his rebounding average of three per game in his last three contests. He’s worth picking up at this point as Brogdon continues to suffer from a sore Achilles that was made more painful the other night.

Chuma Okeke PF ORL-26% Rostered: With Wendell Carter Jr. and Mo Bamba ailing from lower-body injuries, Okeke has been able to help out in the Magic’s frontcourt. Since returning from the COVID list, Okeke has played 21 minutes or more in 4 straight games and he grabbed multiple steals in 3 games during that span. His defense could keep him on the court more even when Carter and Bamba eventually return to action. Okeke can shoot from the outside and he’s received eight or more shots in each of his last three games. The Magic’s guards will provide a lot of their offense, but they will need some post play and that’s where Okeke comes in as he’s more mobile than Robin Lopez. He’s pulled down six or more boards in two of his last three battles and he’s recorded blocks in his last two games.