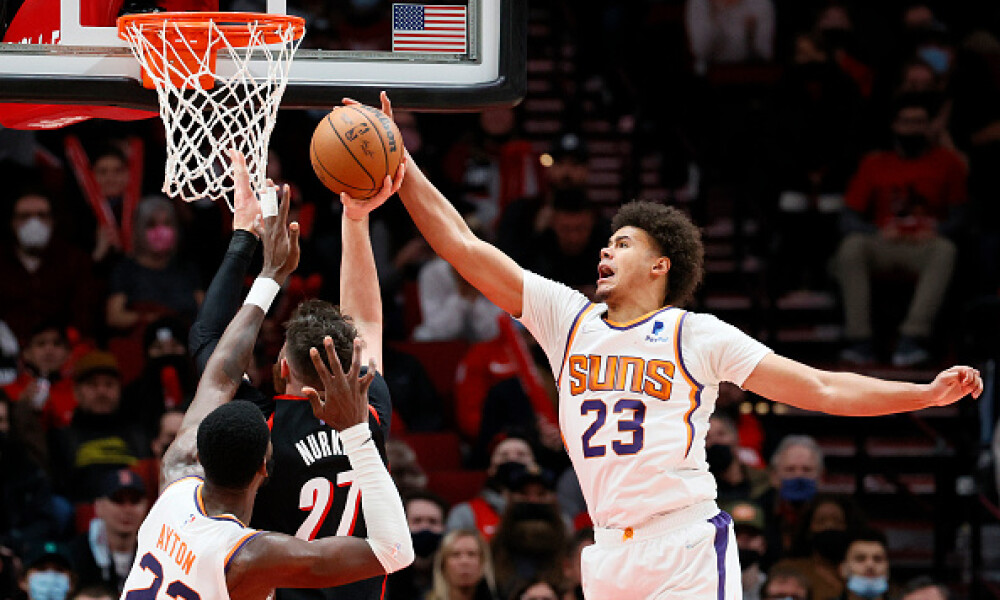 COVID is breaking through and impacting our fantasy basketball rosters and while shuffling around a lot of players can be very annoying, there is a lot of opportunity to be had on the waiver wire. Make sure you’re following our COVID tracker to find out what teams are working with. The Nets, Bulls, Magic, Lakers and Kings are dealing with major COVID issues. There will be a lot of appealing short-term solutions, and in this environment, you have to think short-term. Half of a team can be placed in the league’s COVID protocol at the drop of a dime. We have to protect our teams and to do that, we have to be open to adding lesser known players with the intention of dropping them after a couple of weeks. Playing time is a strong indicator and we have to look for at least 20 minutes to see a true rotation commitment, even if it’s only for a short while.

Cameron Johnson F PHX-39% Invested In: Johnson has proven lately that he doesn’t need double-digit shots in order to hit double figures in scoring. He sees a lot of high percentage shots as a bailout shooter from downtown. Johnson has scored 12 or more points in 8 straight games and he’s grabbed at least 5 boards in each of his last 4 games. Johnson is a good compliment to Mikal Bridges because Bridges is more of a defensive player while Johnson can provide an offensive spark off the bench. Johnson plays over 24 minutes per game and he’s even posted steals in 4 of his last 7 games. He’s a mainstay in the rotation and is someone you can normally rely on for just scoring, but with him producing a bit more consistently in multiple categories, grab him while he’s hot and he has good matchups coming up against the Hornets, Lakers and Thunder.

Tyus Jones PG MEM-40% Invested In: Ja Morant is looking like he’s getting ready to return, so Jones could end up having a shorter stint on your roster, but the Grizzlies may want to manage Morant’s minutes for a few games and that could give Jones more life in the Grizzlies rotation. Jones has scored 12 or more points in 5 straight contests and took at least 10 shots in 4 of those games. He’s quick, agile and he’ll dish four to five dimes per game. The good news is for the season he’s playing over 21 minutes per game, but he will likely lose out on some of his shots. Jones has been producing enough from a defensive standpoint that he could see more action until he proves otherwise. He’s grabbed swipes in four of his last six and pulled down four-plus rebounds in five of his last six contests. As soon as you see his scoring drop off and that Morant doesn’t have any setbacks once he returns, re-release him.

Dewayne Dedmon C MIA-39% Invested In: The Heat are decimated because of COVID, but it’s Bam Adebayo’s injury that’s been opening the door for Dedmon to put up numbers. Dedmon has been scoring in double figures consistently over the last four games and he’s grabbed 12 or more boards in 2 of his last 4 outings. Dedmon (like P.J. Tucker) helps spread the floor for the Heat and Dedmon will pull up and hit knockdown treys. Dedmon has grabbed steals in three of his last four games. The Heat don’t have many other options because Omer Yurtseven is better in short sports and reserves such as KZ Okpala can’t size up against bigger opponents. Dedmon has received 27 minutes of action or more in 4 straight games and the Heat will continue to lean on him and even when Markieff Morris returns, Dedmon still holds value until Adebayo returns from injury in January.

Luke Kennard SG, SF LAC-40% Invested In: The Clippers mid-court has been banged up and while it’s looking like Paul George and Nicolas Batum are on the cusp of returning to the court, Kennard still plays over 28 minutes per game. He’s the team’s top three-point shooting threat shooting over 45 percent from beyond the arc. He scores over 11 points per contest and he’ll provide some rebounding relief as well.  Kennard sees the fourth most amount of shots on the Clippers when they are at full strength so once you see Kennard’s scoring dropoff a bit when others return, you can send him back out there. He’ll help your percentage categories even when the team is healthier, but when that time comes the question that remains is if Kennard will see at least 10 shots. For now, he’s reliable as he’s taken 10 or more shots in 7 of his last 8 contests.

Darius Bazley F OKC-22% Invested In: Bazley put up a stinker last game against the Pelicans, but he’s still logging more than 27 minutes of playing time and that frequently puts him in play on a team that lacks an identity like the Thunder. Sadly enough, Josh Giddey leads the Thunder in rebounding grabbing 6.8 boards per game, but Bazley is right behind him and he’s their best bet in the post. Kenrich Williams is someone to keep an eye on down the road because he’s made a bit of an impact since returning to the court, but Bazley gets more minutes. He’s scored nine-plus points in three of his last four games and he’s actually produced three multi-steal games in his last five. Bazley has also swatted away shots in five of his last seven games. His steals and blocks are keeping his production above water and he’s doing just enough to be worth adding, but keep an eye out for someone that can help out a bit more from a scoring and rebounding standpoint.

Gabe Vincent PG MIA-15% Invested In: Vincent is another short-term solution as the Heat are missing a lot of mid-court options and he and Kyle Lowry can both rotate to being the off-guard. He’s scored 26-plus points in his last 2 games and he’s played over 30 minutes in each of his last 4 battles. Vincent has been helpful distributing the ball as well dishing four or more dimes in six of his last eight games. He’s been aggressive on defense as well and will size up against bigger opponents and he’s even recorded blocks in five of his last six games. He’s also compiled eight steals in six games. He’s doing a little bit of everything and he can rotate to multiple positions. Once Jimmy Butler returns to action, we’ll see how much it takes down Vincent’s time with the ball. Tyler Herro being banged up has given him even more usage.

Patrick Beverley G MIN-30% Invested In: Beverley has been very helpful since returning from injury and he’s played 30 or more minutes in each of his last 3 games. Beverley has scored 10 or more points in 3 of his last 5 games and he’s pulling down over 4 boards per contest and has even swatted away shots in both of his last 2 games. He blocks nearly a shot per game. He’s also grabbed steals in three of his last four games. D’Angelo Russell can rotate to both guard spots and Malik Beasley doesn’t get in the way of Beverley’s minutes. Minnesota has major backcourt defensive issues when Beverley isn’t out there. Beverley is excellent at breaking through screens and his aggressive play keeps any opposing guard on their toes. Beverley has dished seven or more dimes in three of his last four games. He’s taken nine or more shots in four of his last five contests and we can ride it out with him as he’s been more helpful scoring and dropping dimes.

Blake Griffin PF, C BKN-27% Invested In: The Nets are getting hammered by COVID and you know things are crazy when Blake Griffin is fantasy relevant once again. He’s played over 30 minutes in both of his last 2 contests. With Orlando and Washington coming up on the schedule (with Denver in between), Griffin should be in line to once again be productive as Kevin Durant is the latest to enter the league’s COVID protocols. He’s grabbed five or more boards in both of his last two games and he can step back and drain shots from downtown. He isn’t the aggressive attacker anymore that he used to be back when he was with the Clippers, but Griffin can still work the elbow and arc and he’ll provide some help with steals and blocks on the defensive end. The Nets are in need of bodies and you can tell that they’re desperate because Griffin was out of the rotation.

Kessler Edwards SF BKN-25% Invested In: If you’re looking for a more dart-throw option with plenty of intrigue, Edwards has been playing deep into games and he recorded a double-double the other night and he should see success in his next matchup against Orlando. Edwards has taken nine or more shots in his last two games and he grabbed steals in both contests. He’s also pulled down seven or more boards in his last two outings. He can hit shots from all over the court but because of how depleted the Nets are, he should be flirting with double-digit shot attempts for at least the next few weeks. Kevin Durant being out completely benefits Edwards and the Nets will take all of the scoring help they can get and while we don’t know much about the rookie Edwards, desperate times call for desperate measures and we’ve seen him play 33-plus minutes in his last 2 games.

Facundo Campazzo PG DEN-7% Invested In: As we wait for Jamal Murray to return to action we have to continue to keep an eye on the Nuggets guards because they need more help than just Nikola Jokic, Will Barton and Aaron Gordon scoring on offense. Monte Morris has been very helpful keeping the offense moving, but we can’t forget about the speedy Campazzo. He doesn’t score in double figures often, but he’s a hound on the perimeter and has grabbed swipes in seven straight contests. He’s produced eight assists in three of his last four games and he’s even grabbed three boards in his last three games. Campazzo has even blocked shots in three of his last five games and his offensive ceiling will never be that high unless COVID attacks the Nuggets. Campazzo has exceeded his playing time average of 20 minutes in 11 of his last 12 battles.