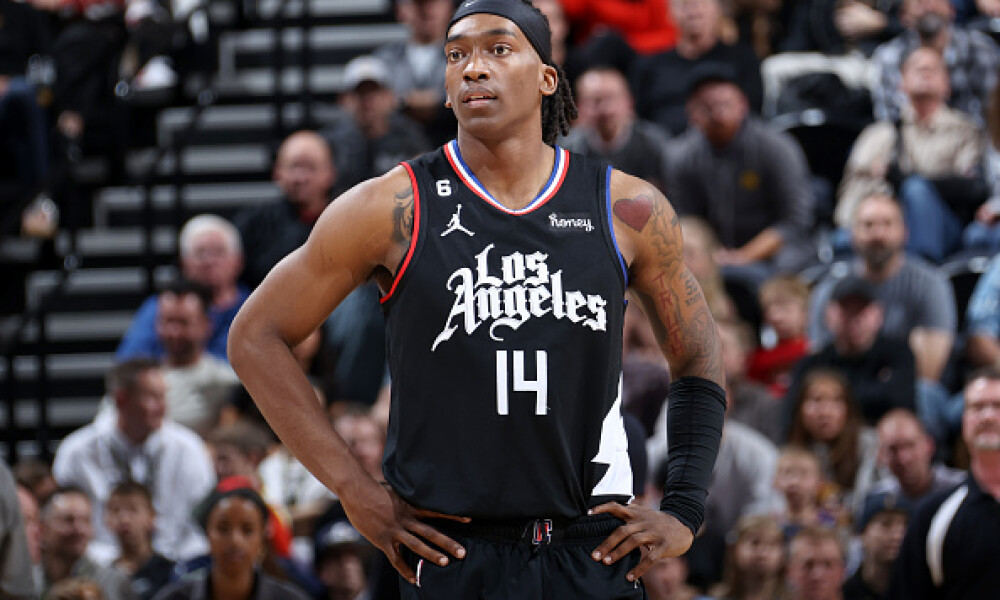 The Los Angeles Clippers, Atlanta Hawks, and New Orleans Pelicans continue to suffer from back and mid-court injuries and there’s a lot of value presenting itself on the fantasy basketball waiver wire. The Clippers guards and forwards may have staying power in the rotation, especially if they manage Kawhi Leonard and John Wall’s workload (which they should) throughout the NBA season. Don’t expect Leonard to be on the basketball court for both legs of back-to-backs. Here are a few players we can rely on for production that could still be on the fantasy basketball waiver wire.

With the Thunder frontcourt a bit damaged and very inefficient on both sides of the ball, Robinson-Earl helps stretch the floor and hits at least one three-pointer per contest. He’s their best bet at center and we should continue to see him log 25-30 minutes per contest. He’s swiped multiple balls and blocked shots in three of his last five outings. He hit double figures in rebounding in two games during that span. Oklahoma City doesn’t have a lot of size.

They’ve tried shifting in Aleksej Pokusevski to center and the Thunder have been one of the weakest frontcourts defensively in the league. We can count on Robinson-Earl for eight to 10 points per game and the Thunder will need to take advantage of whatever size they have to clog the lane, especially with a road trip coming up against teams like the Timberwolves and Hawks who are missing frontcourt options.

Josh Hart and Nassir Little recently hurt themselves and Blazers prioritized scorer Damian Lillard is still sidelined, and Winslow walks into a great opportunity in which he’ll see an uptick in shots. Winslow is looking at a two percent usage bump with the current active Blazers. Winslow’s minutes have skyrocketed playing no fewer than 33 in each of his last 4 games. He scored 10 or more points in 3 and posted a double-double in 1 game during that span.

With Hart out especially, Winslow will help move the ball around and he’s dropped four or more dimes in four of his last five games. We should expect him to continue taking 10 shots or more. He has a safe short-term floor when it comes to his shots. He’s shot at least 50 percent from the field in 2 of his last 3 battles.

John Collins and De’Andre Hunter are going to spend at least the Hawks next few games out of action, and they don’t have too many options to turn to behind them, but Griffin has been playing around 18 minutes per game and we should see his playing time rise to around 30 minutes per game for the next couple of weeks. Griffin has scored 11 or more points in 5 of his last 7 games and he’s provided good defense at the elbow despite him being a bit undersized, Griffin is going to have to play the post a bit more and that should help his rebounding.

From what we’re hearing, Collins should miss the next two weeks of action and Hunter the next week. He’s grabbed steals in eight straight battles. He’s shot 47 percent from the floor and 38 percent from beyond the arc. Until Hunter returns, we should see him take 10-12 shots per battle. Griffin is looking at a usage percentage of 21 for the next few games. Keep an eye on Jarrett Culver as well as a short-term solution.

This isn’t Collins first time being spotlighted in this piece, but with Jakob Poeltl and Jeremy Sochan hurt, Collins should draw a few starts and play 25-30 minutes until Poeltl returns to action. Collins has dealt with a ton of injuries throughout his career, but he should be added as a short-term solution. Collins scored nine or more points in his last two outings and grabbed at least six boards in the three games he’s played in since returning from injury. He posted steals in three straight and blocked shots in two of those games. Collins is a big body that can work his way in the post and fill the void on the defensive side blocking 1.2 shots per contest.

Keep him on a short leash because Collins tends to turn the ball over a bit, but Collins has a couple of good matchups upcoming against the Pelicans and Rockets and he should be able to take advantage even if he only plays 25 minutes. He just needs to watch the fouling because the Spurs lack size with the injuries and need him to play and will be conservative with his minutes if he gets into early foul trouble.

Brandon Ingram has been dealing with an injured toe and Daniels has taken advantage and has been fed more minutes in recent games. Ingram doesn’t seem ready to return to the floor yet and Daniels has seen his playing time increase as each game has passed over his last five. The rookie Daniels has played good defense on the perimeter. Daniels has pulled down five or more rebounds and stole the ball in four of his last five contests. He’ll help set up the offense a bit as well upon receiving the ball at the arc.

He doesn’t always look for his shot and it’ll be fascinating to see if he has another nine-shot game. He has good matchups against weak backcourts and mid-courts coming up against the Spurs, Nuggets, and Pistons. Herbert Jones continues to sit as well shifting up Trey Murphy and that leaves even more room for Daniels to perform.

The Pacers are in the middle of a west coast road trip and their prioritized scorer and floor general Tyrese Haliburton is dealing with an injured groin and he may need to sit. Regardless, McConnell has hit the 21-minute mark in 4 of his last 6 outings. McConnell is another fantasy basketball stopgap and once his minutes and certainly production drops, release him back out to the waiver wire as soon as possible. His scoring has been a bit up and down recently, but he’s been more consistent in grabbing a few rebounds and he’s dropped at least five dimes in five of his last seven battles.

McConnell has been stealing the ball and has posted swipes in nine of his last 11 matchups and with poor defensive backcourts such as the Blazers, Warriors, and Timberwolves coming up on the schedule, McConnell should be able to continue giving us enough production in enough areas to warrant an end of the bench fantasy basketball roster spot. He’ll especially benefit if Haliburton needs a game or two to recover.

We’re awaiting an update on both Kawhi Leonard and Paul George, but with Luke Kennard still sidelined and now Norman Powell ailing, Mann should still have life in the Clippers rotation. He’s played 21 minutes or more in 7 straight games and has taken double-digit field goals in 3 of his last 5 contests. During that seven-game span, he scored 10-plus points in 5 games. He’s scoring eight points per game and is shooting over 55 percent from the field.

Mann has also posted steals in four of his last six contests. He has a couple of pace-up matchups coming up and if the Clippers mid-court players continue to sit, Mann will be force-fed more shots and we should continue seeing him play 25-30 minutes per outing. He’s even been cleaning up the glass a bit more pulling down five or more boards in three of his last five contests.

Here at Fantasy Alarm we have the best NBA DFS coverage for all of your fantasy contents and wagers. We also have the top online fantasy and sportsbook promo codes in your state. Check them out today.