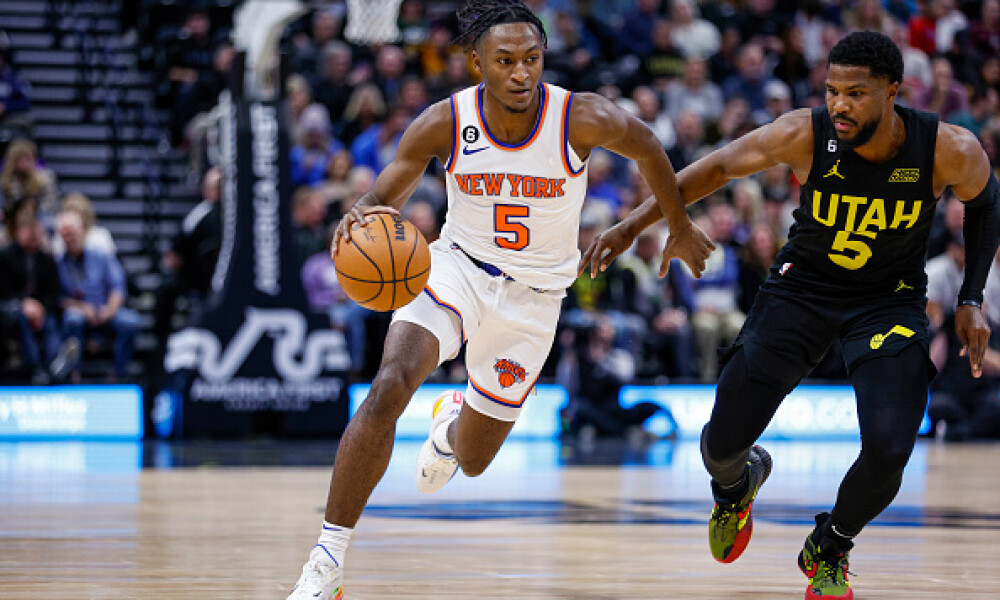 As NBA rotations begin to settle as we reach the one-month mark since the start of the 2022-2023 basketball season, start looking for players on your fantasy basketball waiver wires that are considered short-term solutions. Not every player you pick up in your league will turn into a fantasy basketball stud for the duration of the season.

Look at teams with players who are day-to-day because even though a player such as Miami Heat guard Tyler Herro’s status is still day-to-day, he continues to miss games opening the door for other Heat players to pick up minutes and shots. By finding short-term solutions who are walking into a massive boost in playing time for a short time and then moving on, you’ll get the maximum value out of these NBA reserves and your fantasy basketball production ceiling will rise. Here are a few players who can give your fantasy basketball teams a boost even if it’s short-term.

The Magic have plenty of big men and will have more somehow enter the rotation when Jonathan Isaac returns to action. Paolo Banchero has been missing games and that’s opened opportunities for other players to see the floor more. Bamba has played at least 21 minutes in 3 of his last 4 outings and while he’s limited offensively, he has good size and is a rock in the middle of the paint and gives Orlando some much-needed defense in the post.

Bamba’s posted back-to-back 10-rebound games and he’s hit double figures in scoring in 3 of his last 5 contests. As that big rock in the middle, Bamba has been sending back shots from the opposition in five straight games. He’s blocked shots in eight of his last 10 matchups. Wendell Carter Jr sat out the last game with an injured foot and it’s looking like he’s returning to action, but still may not be 100 percent and that could work in Bamba’s favor. He has strong upcoming matchups against the Pacers and the 76ers.

After receiving 21-plus minutes in 4 straight games, grab Quickley as a short-term solution. He’s a good change-of-pace player off the bench who brings energy and adds speed to the Knicks ball movement. Despite only shooting 38 percent from the field, he takes the 4th most shots per game for the Knicks. He’s taken 10 or more shots in 2 of his last 3 contests and he hits at least 1 three-pointer per game. He makes up for his shooting struggles on the defensive side of the ball. Quickley is very agile and fights through screens.

Quickley pulls down nearly five rebounds and swipes one or more balls per battle. He’s stolen the ball in eight straight outings. The Knicks defense versus opposing guards has been bad this year and Quickley is needed in their rotation. He’s started to contribute a bit more in assists dishing four or more in three of his last five matchups.

In a surprising development, the Warriors sent James Wiseman down to their G-League to develop further and improve his gameplay and that means more minutes should open for Looney. Looney is the Warriors starting center but plays fewer than 24 minutes per game. He’s a bit of an undersized center, but that’s what the Warriors have and that’s why they get crushed in the paint as a team. They don’t have a center that’s at least six feet-10 inches tall. Looney is their best option despite the limited playing time. Draymond Green and JaMychal Green will also see minutes at center.

He’s blocked shots and grabbed eight or more boards in four of his last five games. Looney isn’t a good offensive player. He’ll score mainly from right under the basket which will be good against weaker frontcourts, but he’s in trouble when he battles strong centers. He’s been good at moving the ball around dropping over three dimes per contest. The Warriors face a few weak frontcourts coming up and a lot of these games should have easy layup potential for Looney.

Tyler Herro has missed his last five games and Vincent has seen his playing time increase since he’s been out. He’s hit the 30-minute mark in 4 of his last 5 games. He’s picked up a lot more shots in recent games as a result as well and he’s scored 10 or more points in 7 straight outings. Vincent will help with the playmaking a bit and can toggle to both guard spots and be effective. Vincent has dished at least three dimes per battle.

On defense, he’s posted swipes in six of his last eight contests and he’s very feisty. Unfortunately, he doesn’t supply consistent rebounding but between the minutes, shots, and steals, Vincent has value until Herro is ready to go. Don’t drop Vincent immediately when Herro comes back as they may want to see how he reacts to being back on the court after missing a handful of games, but, if he does return and his minutes and shots drop after a few games, release Vincent.

If you’re in need of a defensive specialist, Konchar is in play after logging 36 minutes in both of his last 2 games. Desmond Bane is dealing with an injured toe and while he’s out Konchar will be a big-time beneficiary along with Tyus Jones. Konchar is mainly utilized as a bailout shooter on offense as he hits 1.5 three-pointers per game. He shoots over 39 percent from beyond the arc and nearly 46 percent from the field, but he doesn’t get enough shots.

Konchar has ripped down a good number of boards lately grabbing seven-plus in four of his last five battles. He’s also producing one steal per game as well and his defense will keep him on the floor longer even if his shots aren’t falling. If his rebounding starts to drop, he can be released, but whenever a back or mid-court Grizzlies player gets hurt, Konchar will be the first to pick up more playing time.

Unless the Bulls are in a blowout situation, Drummond won’t get that true rotation commitment of 20 minutes per game unless Nikola Vucevic injures himself, but Drummond continues to be one of the few players that we can rely on if we need a boost in rebounding. He’s grabbing nine rebounds per battle, and he’s produced three double-doubles in nine games of action. Drummond has pulled down double-digit boards five times this year. He’s an end-of-bench short-term fantasy solution.

Vucevic will continue playing over 30 minutes per game and that will limit Drummond ultimately. He is scoring 8.6 points per game this season and he clearly puts up numbers quickly since the Bulls don’t keep him on the court very long. The good news for the Bulls centers is that five of their next seven games are against weaker frontcourts and Drummond will be able to barrel through the reserves of those teams.

Keegan Murray continues to deal with a sore back and Davis has some appeal for a few games. Davis has scored 12 or more points in 2 of his last 4 contests. He just put up 31 points a couple of games ago and he’s shooting over 48 percent from the floor this season and nearly 41 percent from long-range. If Davis is missing shots, as we saw last game, the Kings will opt to feature other midcourt players more. Davis sinks at least one three-pointer and pulls down three rebounds per contest. Davis has also recorded swipes in five of his last seven outings. Does he have double-digit shot-attempt potential? Absolutely, but the Kings have depth and if Davis put up another weak shooting effort, he’ll be limited to four to six shots, but at least with the minor boards and steals production he provides, it salvages a bad shooting night for a game or two. Keep him on a very short leash.

Here at Fantasy Alarm we have the best NBA DFS coverage for all of your fantasy contents and wagers. We also have the top online fantasy and sportsbook promo codes in your state. Check them out today.