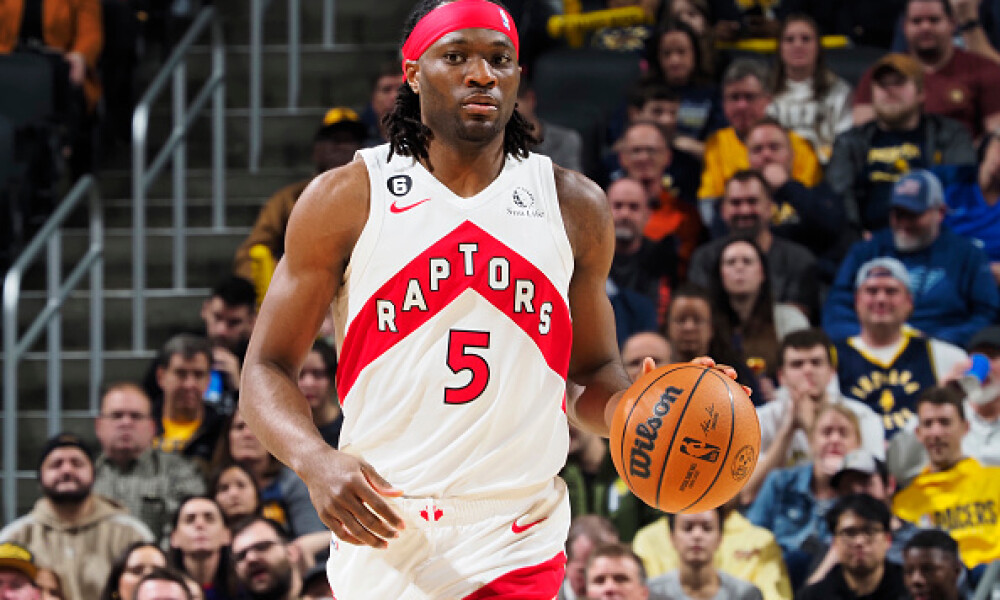 A good number of centers are currently hurt, and lineups in the NBA have had to adjust by shifting power forwards up to play a bit of center. New York Knicks center Mitchell Robinson will miss a few weeks with an injured thumb and Julius Randle and Obi Toppin will have to fill the void left behind leaving open power forward minutes. The Dallas Mavericks are dealing with Christian Wood being out due to a thumb injury as well and they’ve patched in the hole by using multiple big men to play center including Dwight Powell who hasn’t done very well since getting his minutes boosted. Always keep track of NBA injuries including the day-to-day players as well as players who have been rumored in trades. Here are a few more players to pick up from the fantasy basketball waiver wire.

Richardson has had a very strong month shooting the basketball and we’ve seen him take a few more shots since Devin Vassell got hurt and Richardson has shot over 53 percent over his last 4 games and we’ve seen take double-digit field goals in 5 of his last 7 contests. Richardson will provide balanced offense both from inside the arc and outside. He’ll drive the lane if open but doesn’t want to interfere with Jeremy Sochan and Jakob Poeltl who are both inside dominant. Richardson has even pulled down at least three rebounds in three of his last four games and he’ll help run the offense a bit setting up other teammates. He’s dropped at least three dimes per outing this season and he’s also recorded steals in nine straight battles. Richardson continues to stay in the 25-30 minute per game range and he should be able to find success in his next 2 matchups against the Blazers and Lakers.

While the Raptors do run a very tight rotation, if there’s anyone that we can give a look to from time to time, Achiuwa is that player because he can play multiple positions. Luckily for him, he’s benefitted lately from OG Anunoby being out and Achiuwa has scored 10 or more points in 7 of his last 8 contests. He can attack the rim with force like Pascal Siakam and can pull up from downtown. Achiuwa is coming off of back-to-back double-doubles and he’s grabbed at least seven boards in four of his last five games. Achiuwa will do some of the dirty work on defense in the lane and he’s blocked shots in three of his last four and is coming off back-to-back steals’ games. The Raptors are facing a few softer teams defensively coming up and even if Anunoby plays and Achiuwa plays 20 minutes maximum, he can still be plenty productive and deserves a few-week run at the end of fantasy basketball benches.

With Kevin Porter still ailing from a foot injury, Gordon has been playing more on the ball and even though he’s known to be just a scorer, having more time to set up the Rockets offense will boost his assist-potential and he’s posted three or more assists in four of his last seven battles. He’s shot 50 percent from the floor or better in five of his last eight games and he’s played no fewer than 30 minutes in each of his last four battles. He does just enough to be considered not fully scoring dependent, but when Porter comes back, Gordon’s production will likely drop a bit, but until that happens, Gordon can be trusted. He’s taken 10 or more shots in 5 of his last 6 outings and he’s shot over 47 percent over his last 5 contests. Gordon has also stolen the rock in both of his last two battles and even blocked shots in and grabbed three or more boards in two of his last four games.

With Mitchell Robinson out for a few more weeks, Sims (who has tremendous ups) will continue to be fed more minutes. In the past when Robinson has sat out, they’ve relied more on Isaiah Hartenstein who can hit long-range shots, but Sims is a more physical center and can help clog the lane better on defense than Hartenstein. Sims has seen his minutes trend up from 20 to 28 to 33 over his last three games and even though the Knicks have a tough stretch of games against good defenses coming up, Sims has scored in double figures and produced 7 or more rebounds in both of his last 2 outings. In addition to being a big body to keep plays alive and close the lane, Sims has blocked shots in two of his last three games. He doesn’t have many post moves, but he is good at running the floor and has speed to keep up with the guard bringing up the ball on transition. His jumps are very well-timed, and he’ll often be on the receiving end of ally-oops.

As the season’s progressed DiVincenzo has chipped away successfully at getting a bigger piece of the offensive pie for the defending NBA Champion Warriors and he’s played 25 minutes or more consistently and over his last few games, he’s been hot shooting from long-range, hitting at least 43 percent of his treys in 4 of his last 5 battles. DiVincenzo has scored 11 points or more in 4 of his last 6 contests and he does a good job of not chucking up shots for the sake of chucking them up. He’s been helpful on the boards crashing against bigger players when the shot goes up and positioning himself to grab long rebounds and he pulls down 4.6 per outing. He gives fantasy basketball players a steady dose of production including stealing the ball 1.3 times on average and he’s had 6 multi-steal games in his last 13.

Jabari Smith Jr being hurt has benefitted Martin who can toggle between small forward and power forward and he’s played no fewer than 30 minutes in each of his last 5 games. He’s taken 12 or more shots in 4 of his last 6, scored 11 points or more in 7 of his last 9 and he’s aggressive at banging for boards in the paint and he’s pulled down 7 or more rebounds in 4 straight contests. Martin can help run the offense as well a bit and despite Jae’Sean Tate being back in the mix for Houston, Martin continues to get featured and he’s earned his spot in the rotation and the Rockets should continue playing him 30 minutes per game moving forward. He hits nearly 55 percent of the shots he takes and unlike most of his other teammates, he commits on the defensive end always trying to fight through screens at the elbow and arc.

The Wizards have been evening out the playing time lately between Wright and Monte Morris and Wright can do what Morris can do on the defensive end. He’s played at least 21 minutes in 5 straight contests and pulled down 4 or more boards in 3 games during that span. Wright has also been posting more assists, at least four in three straight games, and the Wizards continue to give him more of an opportunity to bring up the rock. Wright has also averaged over two steals per game and has grabbed multiple swipes in seven of his last eight games. As a bonus, he’s been more productive scoring lately, producing 11.7 points per game over his last few and he doesn’t take many shots from the field. Wright is good at changing the pace of the offense and he’ll especially be dangerous on transition. Keep him on a short leash, but also continue to monitor Morris’ minutes because if Morris doesn’t run the point, Wright will be setting up Bradley Beal more.

Here at Fantasy Alarm we have the best NBA coverage for all of your fantasy contents and wagers. We also have the top online fantasy and sportsbook promo codes in your state. Check them out today.