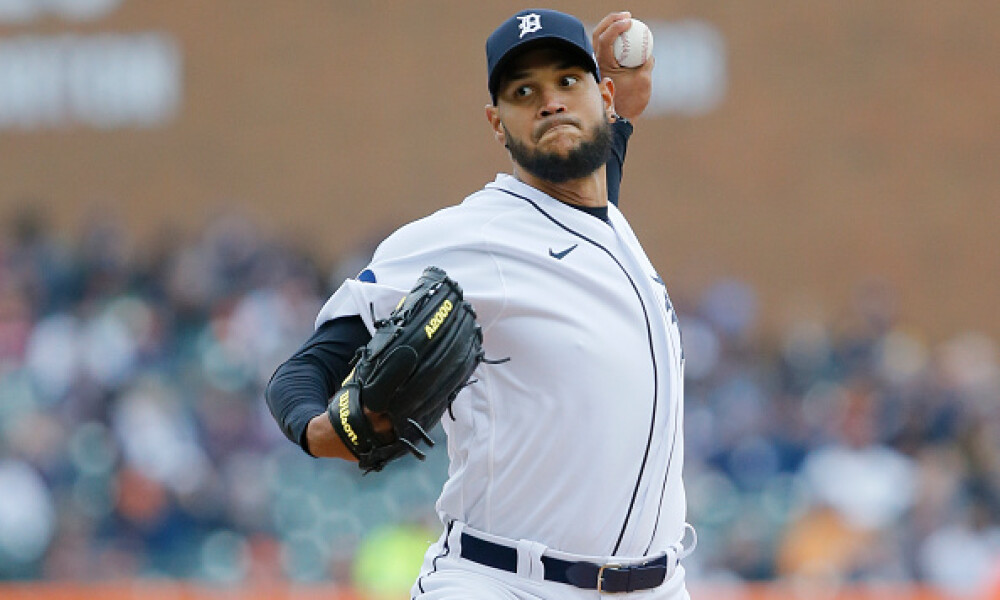 There is a plethora of two start pitchers to choose from or employ in your fantasy rotations occupying the top tier this scoring period. Will all 32 of the potential starts yield superb results for your fantasy squads? Odds are, there are going to be a few clunkers among the gems, but these 16 pitchers offer the best options to bolster your fantasy stat lines this week. Not so many middle tier choices to consider, but there are once again plenty of arms you will do best to avoid using despite their dual appearance appeal.

These 16 pitchers are the cream of the crop among those offering a pair of starts this week. Wind ‘em up and let ‘em go and reap the results. As noted above, no guarantees all these SPs will perform in ace-like fashion, but the chances to succeed with one or more plugged into your lineup this scoring period are better than any of those in the two tiers below.

Rodriguez finally pitched like the ace of the staff the Tigers were looking for when they signed him this winter, tossing a quality start (QS) by holding the Yankees to three earned runs over six innings, while striking out five and yielding just one free pass. He is still looking for his first victory on the season, but will have to do so on the road in Minnesota or LA, not that home has been overly friendly for him so far, either.

Marquez has not been missing as many bats as is his usual course of action while standing atop the hill, and his last outing saw him taken deep three times by the visiting Philadelphia hitters. His walk rate has seen a positive trend this season early on, however, which would be a helpful trend if it continues. Since his opening start against the Dodgers at Coors Field where he was brilliant in holding the opponents to a single earned tally on three hits and no walks, home has not been favorable to him. Thus, two road games may be just the tonic needed to get him back on track.

Berrios notched a QS in his most recent trip to the mound, striking out six while allowing plenty of basepath action on eight hits and a walk. He did his job, though, giving up just a single earned run to the host Red Sox. He gets to toe the rubber at home for his two Week 3 starts, although given his brief, 1/3 inning stint on Opening Day, that does not necessarily bode great things for 27-year-old righthander, but it seems unlikely similar results are in store despite having a pair of less-than-enticing matchups in store.

Eflin has struggled during his last two starts, both on the road, allowing eight earned runs over 9.2 IP. He does have nine Ks over those contests, though, and just one walk allowed. The 15 hits given up to opposing hitters is concerning, but having his first Week 3 start at home against the visiting Rockies has the potential for good fantasy results, but the second start of the scoring period in New York facing the Mets is more worrisome. Perhaps just employ his services for one of his two trips to the bump?

Gibson, the veteran righthander who is a teammate of the starting pitcher discussed just a few lines above, also has contests against the visiting Colorado squad and then takes on the Mets in their home park. His best results were also in his first time toeing the rubber this season, although he did toss a QS last time out against the Rockies at Coors Field. With a current ERA of 3.57 and a stellar 1.02 WHIP over his three starts, he is not likely available in your leagues, so if you have him on your roster, this is prime time to employ him as part of your rotation.

Hicks is slowly being stretched out as he transitions out of the bullpen to the rotation, but seems ensconced as a member of the Cardinals’ starting staff, and will gradually add more innings as his pitch count is expanded. He has only been touched for three safeties over his 7.0 IP to date, while racking up better than a K per inning in the early going. Two home games on the schedule for Week 3 are promising for the 25-year-old righty.

Lyles does not have the best matchups on the calendar this coming week, heading to the Big Apple to take on the Yankees and then facing the Red Sox at home at the end of the scoring period, although the Yankee offense is not exactly a murderer’s row so far in 2022. He has put together a 10:3 K/BB ratio over his last two starts comprising 10.1 IP, but the inflated 1.57 WHIP evidences his tendency to pitch to contact that frequently falls in for base hits by the opposing hitters. His recent success keeps him in the middle tier…for now.

Undoubtedly, a couple or three of these hurlers were targeted in your drafts, perhaps even by you. This week, despite the allure of a dual start week, it is suggested you allow these pitchers to stay on the wire or on your bench if you have rostered them. The potential damage to your ratios with little counting stat value dictates a use of discretion over reckless optimism with regard to these starting options.

The Oakland righty sports an attractive set of ratios with a 1.17 ERA and 0.98 WHIP through his three starts, covering 15.1 IP. There is due to be some negative regression, to be certain, as the .239 BABIP and 89.7% LOB percentages are due to move toward less glitzy realms. The low K rate (5.3 K/9) is a concern, although he is the best available streaming option and pitching across the bay against the host Giants is not really a difficult road trip.

Returning to the A’s rotation, the 28-year-old Blackburn also carries a great set of ratio stats into his trip across the Bay to face the Giant’s hitters: 1.80 ERA and 0.80 WHIP. He is also more of a strikeout producer than his teammate Jefferies, with 14 Ks over his 15.0 IP to date. Only a single walk over that stretch of innings, to boot, makes him a tempting streaming option on Wednesday. There are other choices, too, however, profiled below.

Never a huge K producer, he has really seen his ability to miss bats drop early in 2022, posting a sub-par 2.2 K/9 rate over his two starts. Granted, extremely small sample size to work with at just 8.1 IP. Realize, too, that his scheduled Friday start in Detroit was postponed due to rain, so he may become a Thursday streaming option. The two hits per inning rate has to drop or he will not be useful to any fantasy owners, or for that matter, the Rockies.

Pineda did not sign with the Tigers until mid-March, and opened the season with Triple-A Toledo to ramp up his stamina on the hill. He was able to go five scoreless innings in his first start at the MLB level in 2022, allowing three hits to the Yankees in a victory. The team limited his pitch count in his first start, but presuming he continues to pitch effectively, the inning count should improve going forward, although not dramatically given the limits most teams impose on their SPs these days.

Wacha’s sub 2.00 (1.88 to be precise) ERA through his three starts, and an excellent 0.91 WHIP will lead to his ownership percentage rising over its current miniscule state (10% in both ESPN and Yahoo leagues, 17% on CBS), so now would be a good time to scoop him up. Pitching at Toronto is perhaps not the prime time to insert him into your rotation, but it is difficult to argue with his success to date.

Normally a game against the Pirates would be a major thumbs up, but Pittsburgh is playing .500 baseball early on in 2022, and while Houser has a fine looking 2.89 ERA, his peripherals hint at some brewing trouble: 7:6 K/BB ratio over his 9.1 IP to date, and a 1.50 WHIP. He has managed to dodge any major blowups so far this season, and his recent home/road splits do not scream avoid a road start.

An Oriole starting away from Camden Yards was previously a big thumbs up, but with the alterations to the Oriole home park, that is not necessarily a given any longer. General supposition is that southpaws such as Zimmerman will fare better in Yankee Stadium due to the field dimensions favoring left handed hitters, so there is that positive to this start for the Oriole starter. He has only allowed two earned tallies over his 15.0 IP and just one dinger, while collecting better than a K per inning. All that says sure, take a chance on lefty here.

Bumgarner picked up his K rate in his last start, and although he took the loss, it was on a pair of unearned runs. He is pitching well for the Diamondbacks, posting a better than merely useful 1.39 ERA through three starts on the season, comprised of 13.0 IP. If he can harness his control (10 free passes handed out over his three starts), his usefulness as a SP will improve.

Peterson has amassed an eye-opening 0.64 ERA to open the season, with a stellar 1.00 WHIP through 14.0 IP. The 10:5 K/BB ratio is suspect, demonstrating a need to find and harness his control, and not to be negative, but his peripherals hint at negative regression: .237 BABIP, 92.9 LOB%, 63.2 GB%. Pitching at home against the Phillies is not necessarily where the regression begins, however, and thus he is offered up as a streaming option.

Kuhl had a right hip issue in his most recent start, so look to see how he does against the Tigers on the road prior to taking the mound at Coors Field against the visiting Reds offense. His one start at home this season was successful, as he held the visiting Philadelphia offense scoreless on two hits and one walk, while ringing up four hitters on strikes. Plus, he is going up against the last place Reds at home.

Archer may be the best streaming option for Saturday, but realize he has yet to pitch out of the fifth inning. Sure, it has only been two starts, but he needs to improve on his staying power as the starter to provide decent counting stats. The ratios are more than palatable, though, sitting with a 2.16 ERA and 1.08 WHIP in the early part of 2022. The K per inning rate is nice, too.