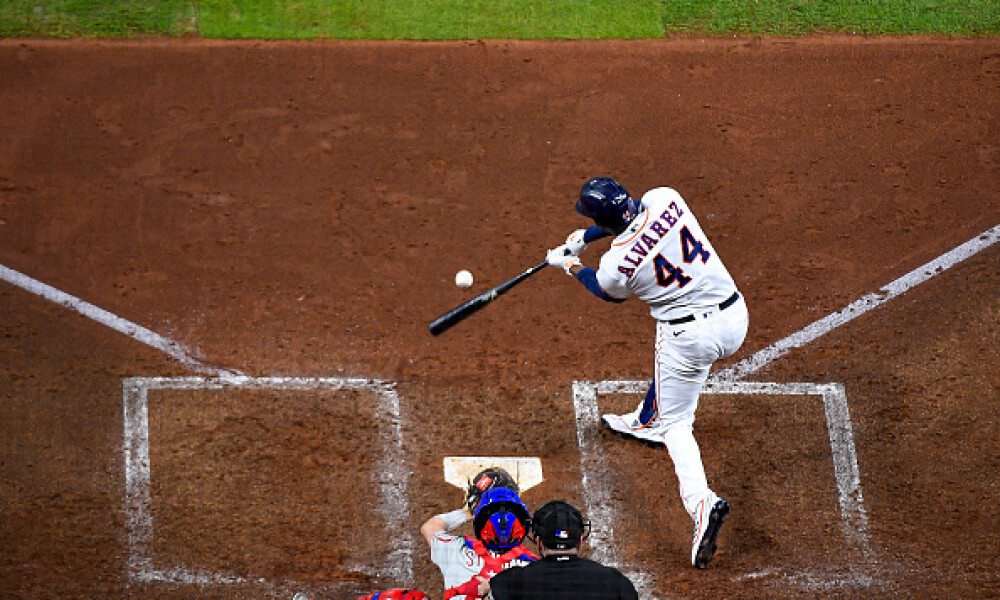 After Houston took Game 4 on a combined no-hitter in a game started by Cristian Javier, we have Game 5 on Thursday between the Astros and Phillies as the series is now tied up 2-2. This game is being played in Philadelphia before the series shifts back to Houston.

We should only expect Alvarez to see Noah Syndergaard once as not one of Syndergaard's outings this postseason has surpassed three innings. Few players in this series have a higher upside than Alvarez, especially with a righty on the mound. Alvarez has a .338 ISO and .424 wOBA versus right-handed pitchers this year.

I know Verlander wasn’t great in the game against the Phillies in Game 2, but we know what he’s capable of. The likely Cy Young this year allowed just one earned run in his previous postseason start against the Yankees. Verlander struck out 10 Phillies in his final start of the regular season, so he’s had success against them this season. He checks in at -134 favorite on the road, too.

Harper is having an absolutely incredible postseason. One for the ages. To this point, he’s belted six home runs, is batting .368, and has posted a 1.199 OPS. Harper has been great against right-handed pitching this year, notching a .249 ISO and .379 wOBA.

Few players in the league, let alone this game, have as much upside as Kyle Tucker does. He has a two-home-run game this postseason and finished the regular season with 33 home runs and 25 stolen bases. Tucker has a .206 ISO and a .355 wOBA against righties this year.

Pena continues to have a lot of playoff success with another two hits on Wednesday. He’s hit in five straight games and has hit in 10 of 11 overall this postseason. Pena is hitting .300 with a .907 OPS this season in the postseason. Hard to find many better options at his price.

You play Hoskins for one reason and one reason only. The chance he hits a home run. He’s belted five homers over his last 10 games this postseason. Profiles far better in tournaments than cash games.

Marsh has had a very up and down playoff run and has twice homered and had absolutely monster outings. He’s in an extremely tough match-up against Justin Verlander, but Marsh hit righties extremely well this season batting .312.

Don't forget to check out the MLB lineups page before locking in MLB daily fantasy lineups. Plus, use the MLB daily projections, our MLB DFS Optimizer, and the rest of our MLB DFS lineup tools before setting your lineups.