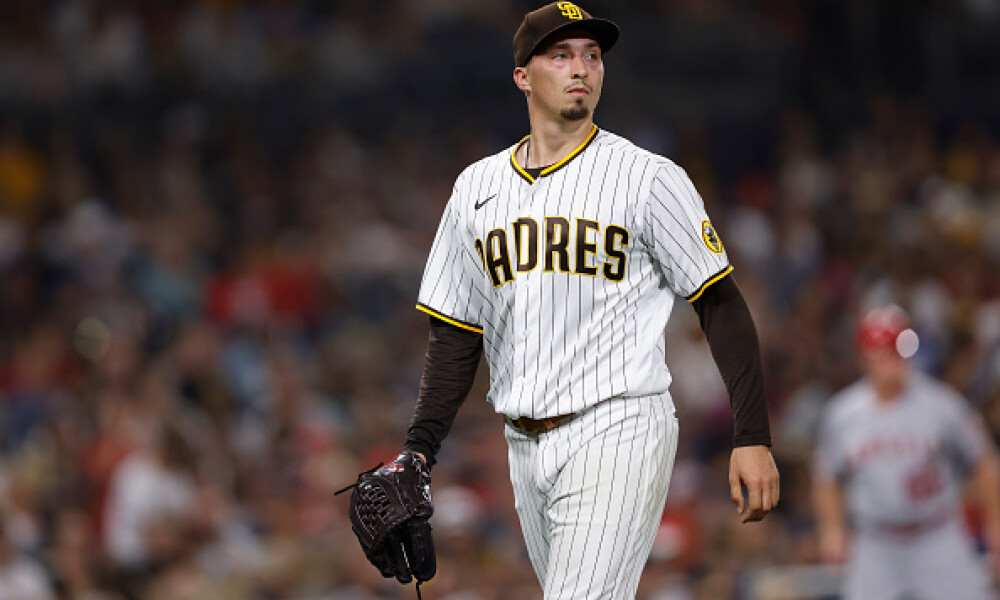 Many players in baseball have struggled in the first half of the season. We often tend to be optimistic and believe it has to get better. For some players, the first half is a sign of things to come and it won't get better

Blake Snell is one of them. The hope was the move to San Diego would enable the left-handed pitcher to throw more innings as the Rays were conservative with him and didn't allow him to throw deep into games. Snell didn't pitch six innings in any start in 2020, averaging 4.5 innings per start. It's been worse with the Padres. Snell has made 16 starts and pitched only 70.1 innings. He is 3-3 with a 4.99 ERA, 1.55 WHIP, 29.2 percent strikeout rate and a 13.8 percent walk rate.

Another player with a bleak outlook the rest of the way is Cavan Biggio. The appeal for Biggio entering the season was his ability to get on base and his speed since he was successful on all 20 stolen base attempts at the major league level and the projection to hit high in a potent Blue Jays lineup. The Blue Jays infielder has struggled with a slash line of .232/.341/.376 with 23 runs, six home runs, 21 RBI and two stolen bases.

Biggio missed time with injury, but he's still been a major disappointment. When you count on a player for stolen bases and get two in early July, he's a bust. The strikeout rate has jumped from 23 percent to 27.7 percent this season and the walk rate has dropped slightly from 15.5 percent to 13.9 percent. With George Springer missing much of the season, Biggio couldn't capitalize. Marcus Semien has been excellent, and he took over the leadoff spot early in the season and Bo Bichette, Vladimir Guerrero Jr. and Teoscar Hernandez are fixtures at the top of the lineup. With Springer back, Biggio is going to hit at the bottom of the order most of the time. He has an xBA of .210 and doesn't make much hard contact. Outside of walk percentage, chase rate and sprint speed, the Statcast page for Biggio paints a bleak picture. Don't expect things to turn around.

Gleyber Torres is another player crushing fantasy teams. It's difficult to believe Torres hit 38 home runs in 2019. In 457 at-bats since then, Torres has six home runs. The Yankees shortstop has a line of .238/.328/.308 with 25 runs, three home runs, 26 RBI and five stolen bases. A strikeout rate of 20.2 percent is good in today's environment and he has an 11.8 percent walk rate. The problem is the lack of hard contact. He has a hard-hit rate of 32.7 percent, the worst in his career and an average exit velocity of 85.9 miles per hour. The average exit velocity is in the fifth percentile, the hard-hit rate in the 14th percentile and the barrel percentage in the 22nd percentile. This has been going on for more than five months. There are few signs it will turn around.

Hill Falling Off the Cliff

Rich Hill was one of the biggest surprises to begin the season. After allowing 16 earned runs in his first 16.1 innings, he was dropped in many leagues. In his next 46.2 innings, Hill allowed 21 hits, five earned runs, walked 15 and struck out 50. His last five starts have been concerning. He has pitched more than five innings just once and only lasted 3.2 innings on Monday. He allowed three hits walked one and allowed one run and struck out five throwing 57 pitches.

There are four players in baseball with at least 15 home runs and 15 stolen bases. Fernando Tatis Jr., Trea Turner, and Ronald Acuna are three. No surprises there. The fourth is surprising. It's Cedric Mullins. The Orioles outfielder was undrafted in some leagues and went very late in deeper formats. I drafted him in round 27 of a 15-team league in the middle of March.

Mullins has been one of the top fantasy values this season. Mullins is slashing .317/.385/.553 with 48 runs, 16 home runs, 34 RBI and 15 stolen bases. Mullins gave up switch hitting and is only batting left-handed. Safe to say, it's working and it's spectacular. Mullins has an 18.8 percent strikeout rate and 9.1 percent walk rate. Mullins has a career best 39.9 percent hard hit rate and a .397 wOBA. He has been fortunate with a .358 BABIP, which is above his career average of .315. Even if the power slows down, Mullins is a good bet to help in average and stolen bases. His sprint speed is in the 90th percentile, his xBA is in the 80th percentile, and his whiff percentage is in the 80th percentile.