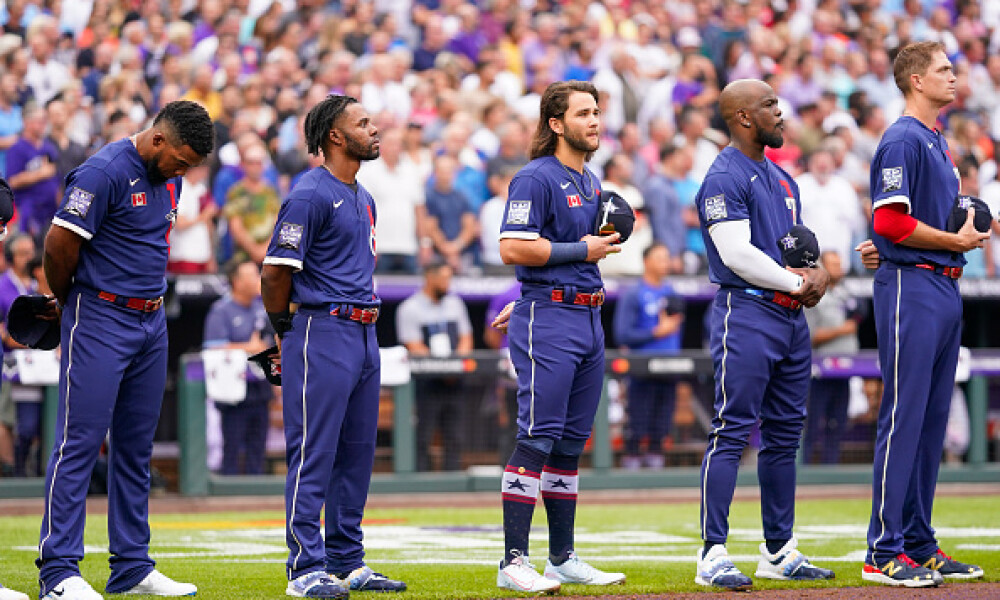 One of the key elements to winning a fantasy baseball championship is getting value late in drafts and hitting on a few players off the waiver wire. There have been a lot of good value picks this season, especially at pitcher. Here is my value All-Star team for the first half and what to expect the rest of the way.

Catcher - Buster Posey (Giants): I only drafted Posey in one league and knew it was a mistake. He was extremely cheap and even if it was the start of the end after taking a year off, it was worth the risk. Posey is batting .328 with 35 runs, 12 home runs, 28 RBI and a .968 OPS. Posey is on the IL with a left thumb contusion but is eligible to return after the All-Star break. Nothing suggests these stats are a fluke. The year off helped Posey.

Second Base - Marcus Semien (Blue Jays): We tend to think of values as double-digit rounds or waiver wire adds. Semien went anywhere from rounds eight-to-ten, but he's been one of the top fantasy players. There's a debate for this position. Semien has a slash line of .277/.345/.528 with 67 runs, 22 home runs, 56 RBI, and ten stolen bases. Semien has the best hard-hit rate and barrel percentage of his career. He's also hitting lead off in an excellent lineup. Semien finished third in the American League MVP voting in 2019 and this season mirrors it. He's a buy high.

Shortstop - Brandon Crawford (Giants): This is one of the biggest surprises this season. He's 34 years old and has topped 20 home runs once, back in 2015. When he got off to a good start, many ignored and left him on the waiver wire. While I didn't expect this, I did add in a few leagues. It always pays to take a shot in case you're wrong. Crawford is an example of this. He has a line of .289/.364/.556 with 49 runs, 18 home runs, 58 RBI, and seven stolen bases. Crawford has a career-high 44.9 percent fly ball rate. Crawford has a lot of red on his Statcast page, including a 15.6 percent barrel rate, which is in the 92nd percentile. I doubt anyone will give up anything good for Crawford. It's likely best to ride it out and even if he slows down, the profit was already made.

Outfielder - Cedric Mullins (Orioles): One of the best values in all drafts and players added off the waiver wire in shallower formats. He has a slash line of .314/.380/.541 with 49 runs, 16 home runs, 35 RBI, and 16 stolen bases. Mullins has a .356 BABIP and the average might decrease, but even if he finishes at .280-.290 it's a positive. He is in the 90th percentile in sprint speed. While he might slow down slightly, it's doubtful someone will overpay for Mullins.

Outfielder - Adolis García (Rangers): He's probably the biggest surprise on the offensive side with a line of .270/.312/.527 with 43 runs, 22 home runs, 62 RBI, and eight stolen bases. The 28-year old showed power and speed in the minors. Garcia has been streaky and is prone to slumps with a 30.6 percent strikeout rate and 4.8 percent walk rate. Garcia rates highly in a lot of the Statcast data but is in the bottom seventh percentile in strikeout percentage, walk percentage, whiff percentage and chase rate. If you can acquire a more proven player for Garcia, do it.

Outfielder - Jesse Winker (Reds): Winker always had the ability and it was about staying healthy. He has a line of .301/.382/.539 with 58 runs, 19 home runs, and 50 RBI. There's a lot of red on the Statcast page for Winker suggesting it's for real. He has a 17.2 percent strikeout rate, ten percent walk rate, and consistently hits the ball hard. Enjoy the breakout.

Freddy Peralta (Brewers): I have always liked Peralta and wanted him in all my drafts. I drafted him ahead of ADP, taking him in round 17 for my NFBC Main Event league, which hass 15 teams. Peralta is 7-3 with a 2.39 ERA, 0.90 WHIP, 35.1 percent strikeout rate and 11.4 percent walk rate. Peralta is for real and could be even better if he cuts down on the walks. Innings are a concern for him. He has pitched 98 innings after throwing 29.1 last season and 85 two years ago. The Brewers are batting for the NL Central division and need Peralta. If you're going to sell, get a great return.

Carlos Rodón (White Sox): If someone tells you Spring Training doesn't matter, point to Rodon. When I started draft champions leagues in January, I didn't have Rodon on my radar. I saw he was non-tendered by Chicago and he increased his velocity in the spring, plus he was healthy and dominated. I began to draft him in the final rounds since he was free. Rodon is currently the second favorite to win the AL Cy Young at +275 on DraftKings Sportsbook, behind Gerrit Cole. Rodon is 7-3 with a 2.31 ERA, 0.96 WHIP, 36.1 percent strikeout rate, and 7.2 percent walk rate. The problem for many pitchers in the second half is the innings concern. Rodon is at 89.2 innings after throwing 7.2 innings last season, 34.2 in 2019 and 120.2 innings in 2018. He's a free agent after the season and the White Sox lead the AL Central, meaning they might push him.

Anthony DeSclafani (Giants): The Giants have been excellent in bringing pitchers in from other teams and turning them around. DeSclafani is 10-3 with a 2.68 ERA, 1.00 WHIP, 23.5 percent strikeout rate and 6.9 percent walk rate. He has an xERA of 3.41 and has benefited from a .238 BABIP and 81 percent strand rate. Home runs were an issue for DeSclafani when he was in Cincinnati and he is allowing only 0.92 HR/9. Don't expect DeSclafani to be as good the rest of the way.

Trevor Rogers (Marlins): Rogers was a target for me in every draft. He is 7-6 with a 2.31 ERA, 1.07 WHIP, 30 percent strikeout rate and 8.4 percent walk rate. The left-hander has excellent stuff and is the real deal and could be better if he cuts down on the walks. The Marlins will be extremely careful with Rogers, especially with the team falling out of contention. He's at 101.1 innings after throwing 28 last season. Rogers hasn't thrown 100 pitches in a game this season. He has reached at least 90 pitches in seven of his 18 starts.

Taijuan Walker (Mets): Health has always been the problem for Walker. He is 7-3 with a 2.50 ERA, 1.03 WHIP, 24.9 percent strikeout rate and 8.4 percent walk rate. Walker has allowed six home runs in 90 innings. He has a xERA of 3.83 and nothing stands out in the profile. He has overachieved.

Mark Melancon (Padres): Melancon is here because he was free in drafts. Two Padres relievers were often drafted ahead of him. Melancon has converted 27 of 31 saves and has a 2.04 ERA and 1.16 WHIP. He doesn't get a lot of strikeouts but induces weak contact and has a 59.3 percent ground ball rate.

Alex Reyes (Cardinals): Reyes wasn't expected to be the closer. He has converted all 20 save chances. He has a 1.52 ERA and a 30.7 percent strikeout rate, but a 1.31 WHIP and 18.2 percent walk rate are problems. If Reyes is on a team that is near the top in saves, he's one to move.