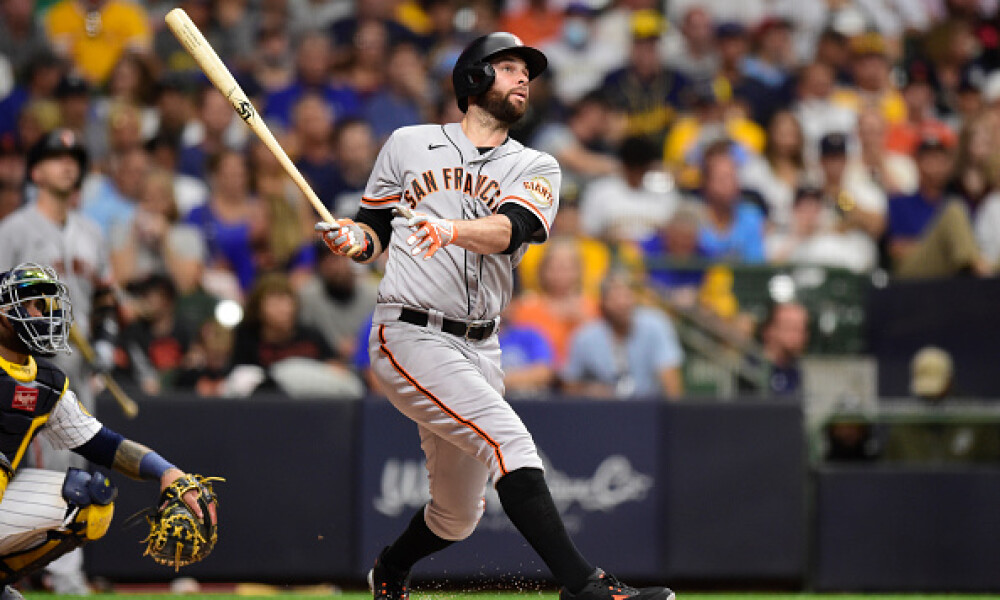 It's unfortunate Brandon Belt has played his entire career in San Francisco and most of his games in one of the toughest hitter parks, especially for left-handers. It's difficult to believe Belt has never had a 20-homer season. If only he played in Yankee Stadium, taking aim at the short right field porch.

Injuries have limited the ceiling for Belt in his career, too. Belt went on the injured list for a brief stint at the end of May and returned June 8 before going back on the IL two weeks later with a knee injury. He was dropped in many leagues and made his return August 5.

Belt could be a difference maker for fantasy teams the rest of the way and should be added in most leagues. I was able to add him in a 15-team league and a 12-team league over the weekend. Unfortunately, I fell short in my two leagues with on-base percentage, where Belt is more valuable.

Lewis Brinson hasn't come close to living up to his prospect pedigree. The Marlins outfielder has a career slash of .200/.250/.327 in 884 career at-bats. Over the last few weeks, Brinson has been hitting. Outfield is thin in 15-team leagues and Brinson is worth adding while he's playing well. Over his last 18 games, Brinson is batting .327 (18-for-55) with seven doubles, nine runs, three home runs and 14 RBIs. The strikeout rate is still high in this span at 28.3 percent, but he's showing more patience with a 6.7 percent walk rate. Brinson has been hitting cleanup in recent games.

Anthony Santander had 20 home runs in 2019 over 380 at-bats and then hit 11 in 153 at-bats last season before his season came to an end due to an oblique injury. This season he has missed time with a left ankle injury and was placed on the COVID-19 list last month. He returned on July 30 and has been on a tear since he came back. Santander hit two home runs Tuesday night and is 12-for-28 (.429) with five runs, three home runs and five RBIs and struck out only three times. He has a seven-game hitting streak and is hitting in the middle of the lineup.

The stolen base category tends to be tight. Adding a player this time of the season with speed can be a difference maker and Yonny Hernandez fits the description. He doesn't have power, but he rarely strikes out, gets on base and can run. In five games since being called up from Triple-A, the Rangers third baseman is 5-for-17 with two runs, two RBIs, two walks and stolen bases and hasn't struck out. In 61 games at Triple-A this season, Hernandez slashed .250/.424/.323 with 42 runs, one home run, 13 RBIs and 21 stolen bases with 54 walks and 44 strikeouts. Hernandez batted second the last three games. While there's no power, he can be a boost in stolen bases.

It has taken longer than many hoped, but Sam Hilliard is finally getting playing time for the Rockies. The outfielder has started 10 of the last 12 games. In August, he is 11-for-27 (.407) with six runs, four home runs, and eight RBIs. In the second half of the season, Hilliard is batting .300 with 11 runs, six home runs and 12 RBIs in 60 at-bats. The underlying stats look good, too. He is in the 90th percentile of max exit velocity, has an 18.3 percent barrel rate and an xSLG of .514. As with most Rockies, they are more appealing playing at home. The Rockies have six games at home next week and play 16 games at home in September.