Fantasy Baseball Player Spotlight: What To Do with Joey Votto and Other Struggling First Basemen? 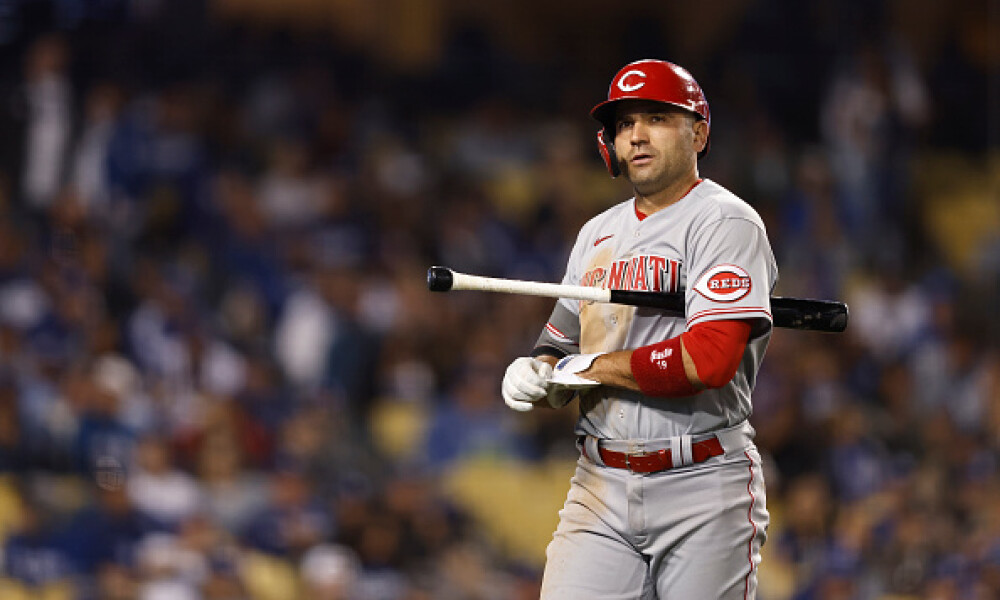 Fantasy baseball rankings are always the starting point to a season, but they have a shelf life. Now that we are a month into the 2022 fantasy baseball season, those initial rankings are garbage. Alright, maybe that is a little dramatic, but it is time to put those original rankings out of our minds and start fresh with what we now know. It is time for a fresh set of MLB fantasy rankings, so let’s take a look at five first baseman who have fallen considerably from their pre-season average draft position (ADP) and what we think about them moving forward.

Joey Votto did not come cheaply this season, and it was for good reason after he hit .266 with 36 home runs and 99 RBI in 2021. Prior to going any further, no one was expecting Cincinnati to trade Jesse Winker and Eugenio Suárez right before the season started, and through this first month, the Reds have been historically bad.

The lack of lineup protection hasn’t helped Votto as he is literally on an island without anyone to drive in, but to say he is having a rough go of it would be an understatement. Through his first 90 plate appearances of the season, Votto is hitting just .122 (although his BABIP is .200) while striking out a career high 32.2% of the time. Votto’s next home run this season will be his first and he has just three RBI and four runs scored while posting a microscopic ISO of .014.

If we take a look at Votto from a Statcast perspective, things aren’t better with his 86.4 degree exit velocity, and just a 26.7% hard-hit rate while barreling up only three balls. We have been waiting for Votto’s decline to begin, and through the first month of the season it has arrived at an accelerated pace. We are getting past the point where an upgrade is necessary, but I would still give him a little more rope on your bench (especially in deep leagues) if possible.

Chalk this one up as a big loss for me to this point. Depending on the league and my roster situation, I have begun dropping him in some leagues as Bobby Dalbec isn’t doing anything to help his cause. Boston has already promoted Franchy Cordero as a platoon option and Triston Casas is lurking in Triple-A, and with the Red Sox looking for a spark, Dalbec could be expendable.

Through 89 plate appearances so far this season, Dalbec has just one home run and three RBI and power was supposed to be what gave him his value. The 31.5% strikeout rate isn’t that unreasonable considering what we had seen from him in the past, but the .076 ISO certainly is troubling as Dalbec is hitting just .139 on the season; albeit with a .196 BABIP.

Dalbec’s lone home run isn’t for lack of trying as he has a 24.6-degree launch angle, but it’s coming with plenty of weak contact (88.1 average exit velocity and 7.7% barrel-rate). To say things aren’t going according to plan would be an understatement.

Despite hitting 31 home runs in 2019, power was never truly Yuri Gurriel’s strong suit but for the most part he generally hit for a good average and was a solid run producer. That hasn’t been the case this year though as Gurriel is hitting just .196 (.237 BABIP) with five RBI on the season and considering he will be turning 38 next month, we have to wonder if the first baseman is truly slowing down.

The Astros lineup is strong and for now they don’t have a clear alternative so that does work in Gurriel’s favor, but until he gets the batting average up, he is true liability. In 76 batted ball events, Gurriel has just one barrel to this point and his average exit velocity has taken a substantial dip down to 85.6 miles per hour. He is hitting less line drives (14.6%) and more fly balls (44.7%) than ever, and none of this looks good on the veteran.

With Chicago sending Frank Schwindel to the minor leagues, I’ll take a victory lap here to help make up for the big miss on Dalbec. Granted that part is temporary as it was just procedural with the first baseman back after just one day, but his performance hasn’t exactly stood out from the pack and it’s hard to feel confident moving forward.

Schwindel emerged out of nowhere last season with a .326 batting average and 14 home runs and 43 RBI in 64 games, but I was skeptical. Through the first 25 games of the season, Schwindel is hitting just .209 with two home runs and nine RBI so his recent loss of playing time shouldn’t come as a surprise. The Cubs don't have much of an investment in Schwindel, so it’s not a surprise to see them ride with Alfonso Rivas as the hot hand with other options lurking as well. With only two balls barreled up to this point and a hard-hit rate of just 28.6%, I would move on as well.

Health has long been an issue for Luke Voit and this season is no different. After heading to the Injured List on April 24th with a bicep injury, the first baseman should be back within the next week or so, and there could be a buying opportunity if he was cut loose in your league.

That doesn’t mean Voit automatically deserves a spot on your roster as we need him to stay healthy on a consistent basis and the 31.5% strikeout rate is always going to be a problem. The issue though, is that the fact that Voit’s power was non-existent prior to his injury with just a .024 ISO while only hitting .143 with a pedestrian 26.9% hard-hit rate while only barreling up two balls with an exit velocity of just 85.9 miles per hour. Tread cautiously here, but the investment should be minimal.