Fantasy Baseball Player Spotlight: Sean Murphy And His Shot In The Rear 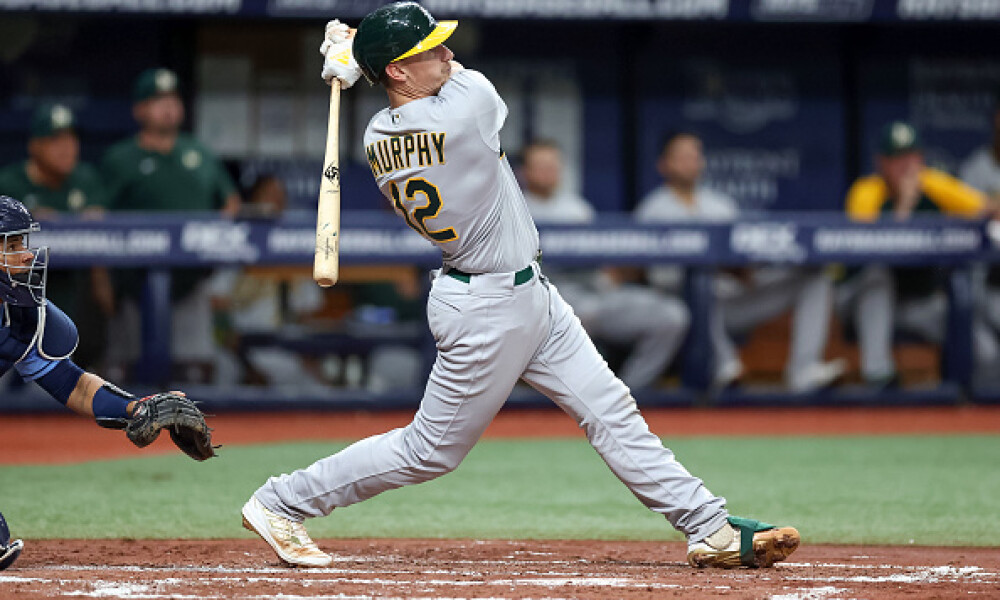 As is usually the case in fantasy baseball, the depth at the catcher position seems rather thin. Or at the very least, it’s not consistent. You either pay for a reliable option early on in your draft or you strike while the iron is hot on a player on the waiver wire. The Oakland Athletics backstop, Sean Murphy, is entering that prime age-27 season we speak so highly of in the fantasy baseball community. Murphy is coming off a career-best season in 2021 where he stroked 17 home runs and 59 RBI in 117 games. With the Athletics trading Matt Olson to Atlanta, and Matt Chapman being dealt to Toronto in the offseason there was an opportunity for a new face of the franchise. Or in most cases with Oakland, there was a new player to pick up the torch and build up their trade value.

Sean Murphy is coming off a very impressive five-game stretch starting last Wednesday and wrapping up on Easter Sunday. Over that stretch he went 8-for-19 with a pair of home runs, three doubles, and eight RBI. In the five games prior to that he went 2-for-23. Coincidentally enough, the scorcher of a weekend came on the heels of one of the most viewed baseball clips from last week…

Sometimes you just need a shot in the rear end to really turn your season around. We talk about pivotal turning points in sports all the time. Dave Roberts stealing second base in Game 4 of the 2004 ALCS to help the Red Sox rally to win the last four games and advance to the World Series. Dont’a Hightower’s sack and forced fumble on Matt Ryan in Super Bowl LI as the Patriots mounted a comeback to win. Jordan Binnington, a rookie goaltender, joining the St. Louis Blues in January 2019 to help St. Louis go from the worst team in the league to Stanley Cup Champions. Is the booty boost that moment for Murphy to pull off an excellent season?

Heading into the 2022 season, there was plenty of optimism for Murphy. He had a fantastic Spring with a slash line of .433/.486/.833 where eight of his 13 hits went for extra bases and he also drew four walks and drove in eight runs. You always take Spring Training numbers with a grain of salt especially considering the slow-ish start he got off to during the team’s first five games, but he’s quickly bounced back.

But what is the long-term outlook for Murphy? His rostership numbers indicate that shallow league managers are taking a bit of a wait and see approach as he’s available in about half of all leagues on ESPN. The raw power has been on display plenty of times throughout his career. He was on pace for 20+ home runs across 162 games a year ago, but he’s yet to appear in 120 games in a season.

By all indications, the power is up. I don’t want to declare that he’s sold out for power just nine games into the season, but would it really surprise anyone? Currently he’s striking out 33.3% and walking in just 5.1% of his plate appearances. I would expect positive regression in both categories, but he still strikes out about 26% of the time in his career. That gives me pause for points leagues. However, if he continues to compensate with power then you can disregard the plate discipline. Now back to the power. His hard-hit percentage is sitting at 47.8%. Again, it’s a very small sample size and his career hard hit rate is 34.9% so expect regression, but he could still set a career high in this department with ease. He’s also putting the ball in the air more (47.8% fly ball rate, identical to his hard-hit rate). So it makes sense why his slugging percentage is currently at .564 with a wRC+ of 151.

It wouldn’t necessarily surprise me if Murphy had a great week coming up. He should get a day off as the Athletics have seven games on tap, but obviously I’m in no position to make that call. But the A’s are projected for four games against the Orioles and three against the Rangers, all at home. That’s probably the lone concern for Murphy this week. He’s a career .198 hitter with just ten home runs at home compared to .244 on the road with 20 dingers. However, neither rotation for Texas or Baltimore really jumps off the page and instills fear in hitters. As it stands right now, the Athletics are scheduled to face four right-handed pitchers in the upcoming scoring period and for power purposes, Murphy has hit 21 of his 30 career home runs off RHP’s and we still don’t know officially who the Athletics will face on Tuesday and Friday.

A strong week will certainly offer up a spike in ownership if he backs up what he’s done since last Wednesday. And if he can maintain this then I am somewhat optimistic that he could be a prime trade candidate this season. He’s making less than a million dollars on his current deal and the Athletics lost some of their best players in the offseason. Oakland entered the 2022 season projected to finish last in the AL West and the over/under on their win total set at 68.5. If Oakland is not competitive by the trade deadline, Murphy could be dealt. This would be beneficial for a couple reasons. A ballpark upgrade is never a bad thing, especially if you account for the home/road splits mentioned in the previous paragraph. For the last five years, the Oakland Coliseum has undergone plenty of name changes but it consistency grades out as one of the ten worst ballparks in the league for hitters. In the case of the last two seasons, it’s been a bottom five ballpark. A deal to any other team would be an upgrade by default. But it wouldn’t just be an environmental upgrade. Assuming he is dealt to a contender, the lineup would be much improved as well if you could slot him in with other power hitters and plenty of runners he can drive in.

It's far from a lock or guarantee to view Murphy as the next great fantasy baseball catcher. But the Athletics are an organization that gets the most from their players and they tend to rally around being this team of misfit toys. Could they go on a magical, unexpected run in 2022? Sure, we’ve seen it before. And if that’s the case you have to assume Murphy is playing a role in that. But if he stays healthy (which has been an issue for him in the past), then he could certainly become a viable option at a position lacking depth. Murphy isn’t worth a big portion of your FAAB budget, but if you can pick him up for the coming scoring period just to see what happens, I don’t hate the outlook this week given the soft pitching matchups he could exploit.