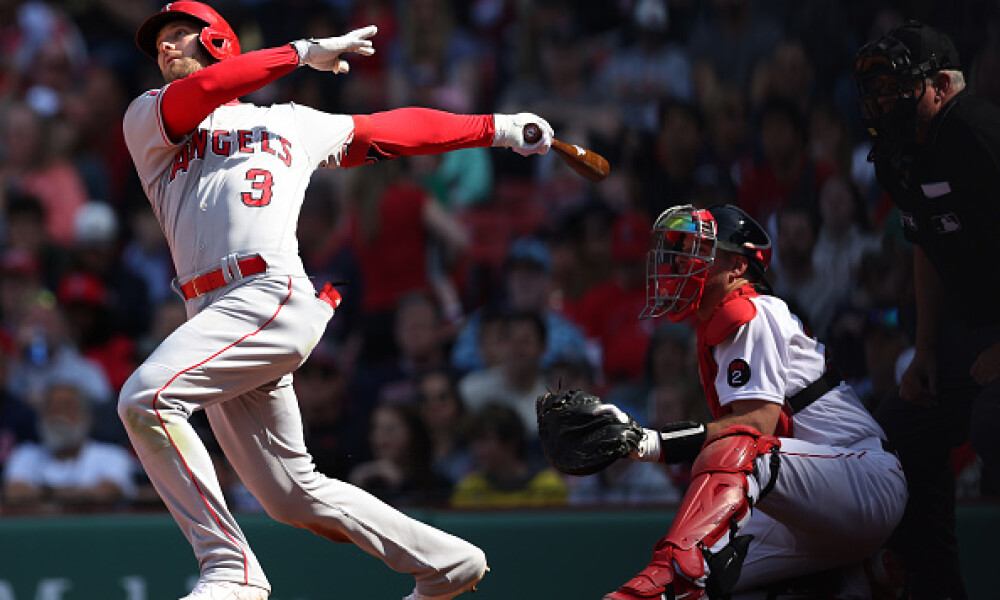 When you play on a team that has one of the greatest hitters of all time, and the most dynamic player since Babe Ruth on it, it's easy to lose sight of someone like Taylor Ward. Ward through the first 19 games of the season has been fantastic in both real-life baseball and fantasy baseball as a must-add waiver wire gem. So let's take a closer look at Ward to understand if he is a piece you should hold onto, or sell high early in the season.

Let’s start with Ward’s path to the majors. He was drafted by the Angels in the first round out of Fresno State back in 2015. By 2017, many baseball evaluators had largely moved on from him being a productive everyday player in MLB. He was viewed as a strong defender, who had a good plate approach, but the thought was that his bat speed and swing mechanics were going to prevent him from being a real fantasy star.  The Angels seem to have seen things differently though.

In 2018, Ward made his MLB debut and played 40 games. But something seemed to change for him in 2019. In 106 games at AAA that year, he hit 27 home runs, stole 11 bases, walked 15.6 percent of the time and put up a triple slash of .306/.427/.584. Now, these numbers are certainly impressive, but what might be more impressive if you compare those numbers to his last year in AA in 2017 - just two years earlier. In just two years, his slash line improved by 20 points in batting average, 20 points in on-base percentage, for an astounding 197 points! While we don’t get Statcast or other advanced stats to help us diagnose what exactly changed in his swing, we can be confident that he has worked on his swing as we do see changes in his MLB data over the last five years with an increase in his maximum exit velocity. This brings us to today, where his 2022 current slash line looks a lot like it did back in that 2017 AAA season.

This season appears to have been a big leap forward for Ward, and while we all love nearly a month of solid production from a player, we would much prefer a full season of production. So let's take a look closer to understand if his gains are real and if he is a player that we should hold or look to move on from.

With that, we should also expect his on-base percentage (OBP) to regress with it by a similar amount. Ward is walking at a 17-percent rate which is also high, but likely only by a few percent, so we should continue to see a solid OBP number for him, and if the Angels keep using him at the top of the lineup this should lead to big run total numbers from him as long as the other key players in the lineup - Shohei Ohtani, Mike Trout, Anthony Rendon - can stay healthy.

Lastly, Ward's slugging percentage (SLG). His current SLG is .721, while his expected number is .601, which again signals regression. Even his expected SLG is very high, and when we look at Ward’s exit velocity numbers - both average and max - they signal that there could be a lot of regression to come in his SLG numbers. His average exit velocity comes in 87.3 MPH, which is in the 21st-percentile of the league, and his maximum exit velocity is at 109.7 MPH - in the 69th percentile. When we look at both of these numbers over his career, we see that his average exit velocity is a couple of MPH low, but his maximum is close to his career-best. To have a slugging percentage that is as high as Ward’s has been while generally not hitting the ball that hard means that we should expect significant regression from him.

Do We Stay The Course or Sell High on Ward?

For most people in season-long leagues, unless you are playing in leagues with more than 15 teams, Ward came at the cost of FAAB or was a waiver wire pickup. In either case, he is the equivalent of found money right now. He is hitting near the top of the order (and has been for a year) with strong walk numbers, he should be able to hold that position in the batting order while being providing runs, batting average and OBP. If you’re hoping for the power numbers to continue that is where you should be lowering your expectations, he is certainly capable of hitting home runs. I would expect him to top out around 20 home runs, which by all means is proactive with the rest of his profile, and we likely won’t get more than 5 steals.

I think he is a hold. Batting average and OBP can be hard to find on waivers, and if you are in a place where you have plenty of players who hit for average and OBP then he should be a useful trade chip to try and go get some power and/or stolen bases and put yourself in a good position to compete in your batting categories.