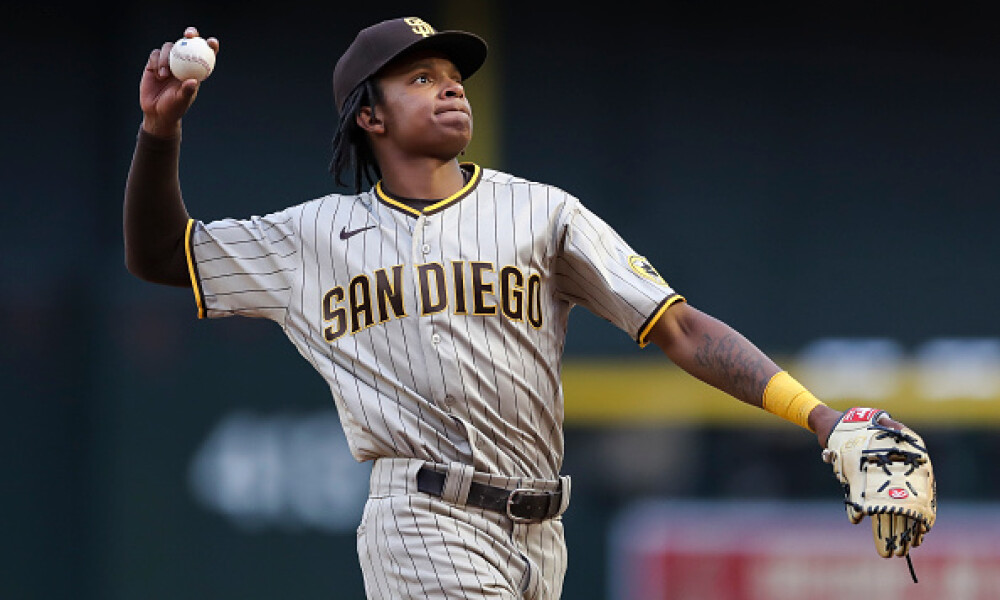 The combination of the Fernando Tatis Jr. injury and the strong spring play from C.J. Abrams had fantasy baseball managers crawling on top of one another to draft him this year. The Abrams craze in San Diego had us like the zombies from World War Z trying to penetrate the city walls. By the last week of Spring Training, Abrams’ ADP in NFBC leagues rose to about 300th overall – and that was before Abrams was even guaranteed a roster spot with the Padres. His highest draft slot that week? A wild 97th overall.

The prospect of Abrams being inserted into a San Diego lineup amidst Manny Machado, Jake Cronenworth, Luke Voit, and eventually Tatis was very appealing to fantasy baseball managers. Ultimately, Abrams did make the roster and many a fantasy player rejoiced. Well, then he played in only three of the Padres’ first six games. It seems a platoon is shaping up for the talented, but young, shortstop and we're all asking the question, “Is he worth a spot on our fantasy baseball rosters?”

As someone who rosters C.J. Abrams in a couple of leagues, I am mainly analyzing him as someone to potentially move on from in favor of other players who can guarantee me more playing time. Let's dive into the fantasy baseball value of Abrams for the rest of the 2022 MLB season.

Which Side of the Platoon?

As a left-handed batter, Abrams has the benefit of actually playing on the strong side of a platoon. Every time the Padres face a right-handed pitcher, he should be in the lineup. Through San Diego's first seven games of the season, this pattern stuck in each one.

In the four games where the Padres faced a right-handed starter, Abrams was in the lineup at shortstop each time. In the three games where they faced lefties, he was back on the bench. This was surely a frustrating sign to see Abrams on the pine for three of the Padres’ first five games, but I guess Ha-Seong Kim has to get at-bats.

To make matters worse, Abrams hit ninth three times and eighth once in his first four starts. No matter how strong his prospect pedigree, San Diego apparently is going to make the youngster earn his keep at the bottom of the lineup before pushing him up the order.

Should Abrams Be Platooning?

I appreciate the fact that the Padres want to take it easy with a future franchise-leading player who had never even played about Double-A ball before this year. Still, his splits when he finally reached the upper levels of the minor leagues last season suggest maybe it’s worth rolling him out there every day. Here are his splits in 2021, courtesy of Baseball Reference, when he spent most of the season with the AA San Antonio Missions.

It’s a small sample size of 41 plate appearances, but Abrams absolutely destroyed left-handed pitching in Double-A last season. Letting him play four out of every seven days is certainly some kind of plan so far, but if he really is special then why not let him get some on-the-job training and play every day? Ha-Seong Kim, meanwhile, has a career .629 OPS through his first 300+ major league plate appearances and is almost 27 years old. What’s the harm?

Can Abrams Improve Before Tatis Is Back?

The presence of Ha-Seong Kim represents both an opportunity and a threat to Abrams as the season progresses. The way I see it, it’s a binary decision for the Padres:

In his first five games played, Abrams is only 1-for-14 for a .071 batting average and no extra-base hits. It’s unreasonable to draw anything from this small sample – especially when he has been yanked in and out of the lineup – but at least the batting eye looks good.

Abrams has identical 12.5% walk and strikeout rates, with two of each so far. His contact rate is 90% through four games and his swinging strike rate (13.6%) is just a touch over his Double-A number from 2021 (12.5%). For someone who had an OBP above .360 in two of his three minor league stops, it’s encouraging to see these early returns that the command of the strike zone is so far translating to the big leagues.

In the early goings of this MLB season, the average strikeout rate among all hitters is 22% and the average walk rate is 8.4%. Abrams bests both of those even in limited playing time.

The decision to keep Abrams on your 12- or 15-team roster through these early weeks really depends on what the Padres commit to doing with his role. Abrams is in the midst of a four-game stretch where he will face all right-handers. Then, back-to-back hittable lefties come calling Monday and Tuesday of next week in Nick Lodolo and Reiver Sanmartin. If Abrams gets any momentum this weekend, do they leave him in?

If not, he simply can’t be in our weekly lineups if he will miss a minimum of two games in a six-game week. And, if can’t be in our lineups, then he ultimately doesn’t belong on our rosters.

Watch Abrams’ role closely this weekend and then observe what happens against a lefty on Monday. If he is still sitting, it will be time to think about cutting our losses.