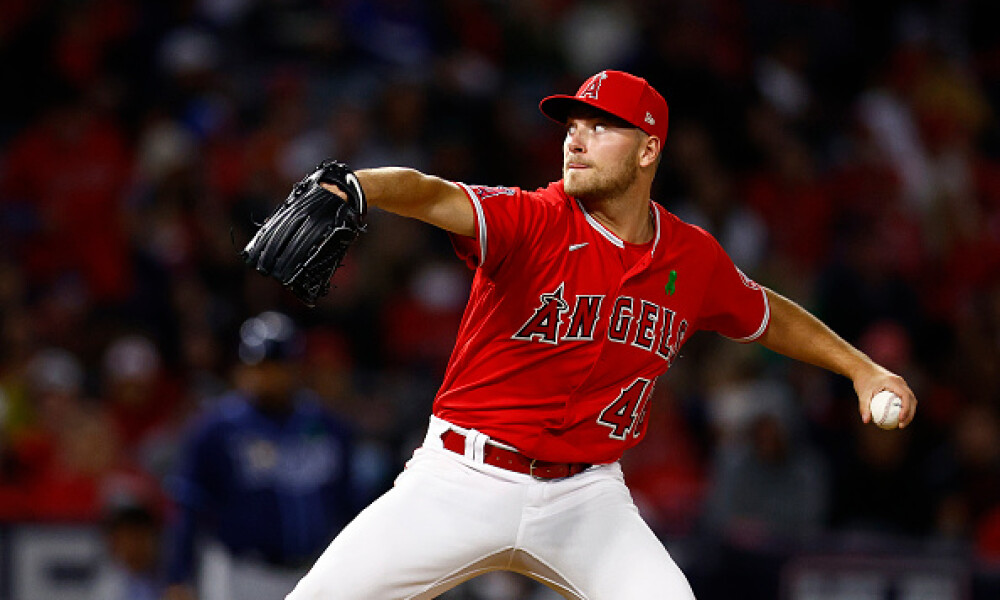 Los Angeles Angels pitcher Reid Detmers dominated MLB headlines earlier this week when he tossed a no-hitter on Tuesday night against the Tampa Bay Rays. Naturally, everyone is wondering if Detmers is now worth adding off the fantasy baseball waiver wire following that lights-out performance. When this season began, the left-hander was very low on the fantasy baseball rankings and was barely drafted in most leagues. Well, a no-hitter will certainly put you on the map in both real life and fantasy baseball circles. Detmers is now rostered in 20% of leagues on Yahoo and is one of the most added players on ESPN over the past week. So, what should you do with the Angels’ starter? Is he a fantasy baseball sleeper to add off waivers? For today’s MLB Player Spotlight article, let’s take a closer look at Detmers and what to expect for the rest of the 2022 fantasy baseball season.

Who is Reid Detmers?

It’s a fair question since the casual MLB fan and fantasy baseball manager likely hadn’t heard much of Detmers before he tossed that no-no. The Angels selected him 10th overall in the first round of the 2020 MLB Draft after a couple of standout collegiate seasons at Louisville. He then didn’t pitch at all in the Angels’ organization in the COVID-impacted 2020 campaign.

Detmers started out at Double-A last season and compiled a 3.50 ERA across 12 starts. He then made just two starts at Triple-A, allowing one run over eight combined innings, before getting the call up to the majors. While in the Angels’ rotation in 2021, Detmers struggled to a 7.40 ERA and 1.79 WHIP over five starts. It was definitely not an ideal beginning to the southpaw’s big-league career, though the quick rise from Double-A to the majors is certainly impressive.

Detmers broke Spring Training as a member of Los Angeles’ rotation for this 2022 season. Before the no-hitter, the 22-year-old had a 5.32 ERA and 1.14 WHIP over five starts to begin the year. Though he showed flashes at times – like five innings of one-run ball vs. Cleveland on April 28th – a complete-game shutout and a no-hit performance is a whole other story.

Detmers features a four-pitch arsenal. The left-hander relies mostly on a 93 mph four-seam fastball (thrown 48.3% of the time), a 73 mph curveball (24.4%), and an 83 mph slider (18.4%). Then there’s a 84 mph change-up that makes up just 8.9% of his pitches. Though he’s not a hard-thrower from the left side, the 20 mph difference between fastball and curve definitely plays in the big leagues.

Before we get into Detmers’ fantasy baseball value for the rest of the season, let’s take a moment to dive deeper into his no-hitter against the Rays on Tuesday. This actually could’ve been a perfect game for the Angels’ starter if not for a full-count walk by Taylor Walls in the sixth inning and Brett Phillips reaching on a Jared Walsh fielding error in the seventh. Those were
Tampa Bay’s only two baserunners of the evening as Detmers faced one batter over the minimum.

The no-hit performance is especially impressive when you consider the Rays are among the league’s top 10 offenses against left-handed pitchers when it comes to wOBA, batting average, wRC+, and strikeout rate. The lineup usually gives opposing lefties a tough time, but Detmers clearly wasn’t phased.

Though Detmers didn’t allow a hit and nearly tossed a perfecto, it’s worth noting that he only had two strikeouts on the night. So it’s not like the Tampa hitters weren’t making contact, but those batted balls were just going right to the Angels’ fielders time after time. That’s a bit lucky for Detmers, because he likely would’ve been out of the game in the fifth or sixth inning if one or two of those grounders or line drives found a hole. Then, we’re probably not talking about a guy who tossed a no-hitter and his rising fantasy baseball value.

If you look at all 27 outs for Detmers, you’ll notice that a lot of the Rays’ contact is on the softer side against off-speed pitches. In fact, the Angels’ southpaw induced just a 24% hard-contact rate across his 108 total pitches in the game.

A quick note on the recent history of pitchers who threw no-hitters and what it means in the short/long-term for fantasy baseball. Let’s look back at the 2021 season when there were nine no-no’s tossed. If we take out the two combined efforts by the Brewers and Cubs, seven individual pitchers completed the feat. They were Tyler Gilbert, Corey Kluber, Spencer Turnbull, Wade Miley, John Means, Carlos Rodón, and Joe Musgrove.

To put Detmers’ accomplishment into perspective, let’s look at what happened to those pitchers after they threw their no-hitters. Rodon, Musgrove, and Means went on to have good seasons and were top fantasy starters moving forward – though all three were already probably rostered in nearly every league before their no-hit outings last year anyway.

As for the rest, though? Well, it gets a bit more murky. Miley gave up eight runs and 11 hits over three innings in his next start and was a risky streaming option the rest of the way – though he did have some solid outings here and there. Turnbull turned in a quality start in his next appearance but then underwent Tommy John surgery in July 2021, just a couple of weeks after his no-no. Kluber lasted just three innings in his next start before leaving early with shoulder tightness and then missing three months on the Injured List. Gilbert gave up four runs and nine hits in his next start and eventually had his season cut short due to elbow inflammation.

So, more often than not, the pitchers who threw no-hitters last year were worse off than before with many dealing with injuries. Obviously, we hope Detmers avoids that same fate, but it’s a cautionary tale for any pitcher who throws a no-hitter – especially this early in the MLB calendar. It’s also worth noting that most of those guys who did it last season are now fringe-fantasy options or not even rostered in most leagues in this 2022 season (outside of Rodon and Musgrove).

Is Detmers Worth Adding?

The natural inclination and temptation surrounding Detmers or any pitcher who just threw a no-hitter would be to rush to the waiver wire to see if he’s available. Well, you’ll find he’s still out there in the majority of fantasy baseball leagues. Maybe some already scooped him up in leagues with daily roster moves. Others may be wondering if Detmers is worth bidding precious FAAB on in weekly waiver leagues.

Though the no-hit performance was certainly impressive, we have to expect Detmers to come back down to Earth at some point soon. On the surface, a 3.77 ERA and 0.84 WHIP look incredible, but the regression monster is coming.

Detmers’ .174 BABIP is worrisome and it tells us that he’s gotten lucky this season. The same goes for his .255 expected batting average against, which is much higher than his current .165 opponent’s batting average. Then there’s the 4.06 FIP and 4.37 xFIP. Oh, how about just a 16.6% strikeout rate and 8.3% homerun-to-flyball ratio? Both those numbers should warn us of some negative regression as well.

Not to be a complete Debbie Downer, but we really shouldn’t be getting all that excited about Detmers. Maybe the Angels’ left-hander has another couple of good outings, but he’ll be a risky option to start in your fantasy baseball leagues. You can consider streaming him in some favorable matchups, but don’t be surprised if he has a poor start as the advanced stats suggest.

Detmers’ next scheduled start is on Tuesday, May 17th, on the road against the Texas Rangers. It’s a tough matchup, especially considering he got shelled for five runs over 3.1 innings against Texas a month ago. So, maybe that regression will come sooner rather than later for the Los Angeles pitcher. Either way, don’t run to add to Detmers off waivers like you might be tempted to do.