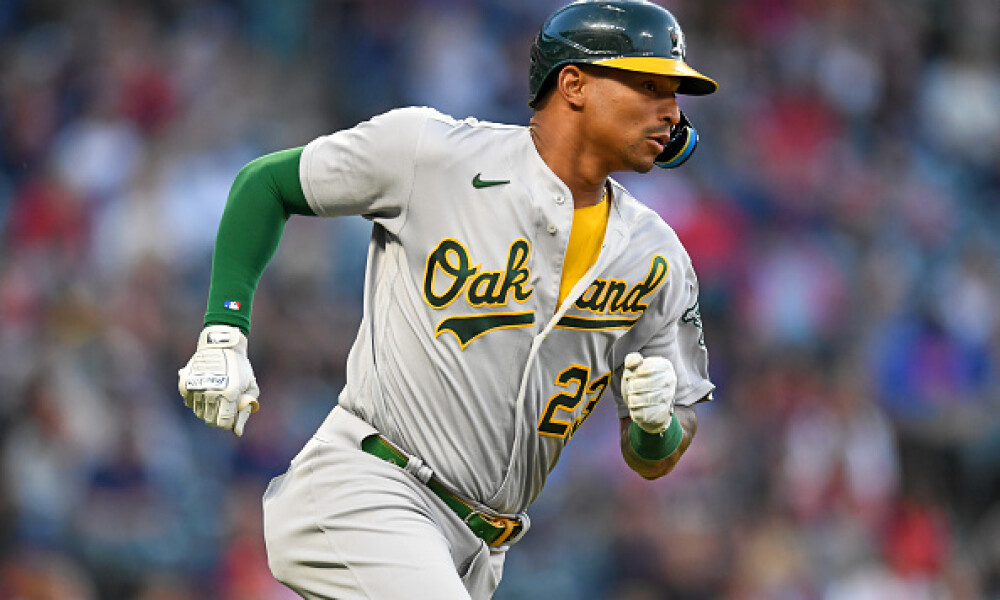 After spending the last few weeks touching on MLB top prospects like Adley Rutschman and his sluggish debut (although he played very well last week) and Gabriel Moreno’s potential impact on the Toronto Blue Jays. I figured now is a good time to dial it back and examine a player off everyone’s radar. Christian Bethancourt is a guy that is quietly putting together a decent campaign with the Oakland Athletics. But you won’t find him on many fantasy baseball rankings lists, but once the calendar turns to July he may be worth adding in deeper leagues or two-catcher formats. This isn’t a player you need to grab now but keep him on your radar. He’s been getting plenty of opportunities behind the plate and as he continues to gain catcher-eligibility I suspect he’ll be featured in more fantasy baseball waiver wire columns in a couple weeks.

The eligibility might be an issue at this time. He has both first base and catcher eligibility on ESPN, but they’re a bit lenient with their requirements. Remember, they once allowed Taysom Hill to have both tight end and quarterback eligibility. Bethancourt logged his 11th start behind the plate on Thursday so some fantasy providers may not list him as a catcher just yet. But it’s coming since most sites provide eligibility once a player gets ten appearances at a certain position. Either way, the 30-year-old journeyman catcher has been making some noise this month.

The power certainly stands out. Everything from his average/max exit velocity, hard hit rate, xwOBA, xBA, xSLG, and barrel rate. Those stats are all in a very elite tier. Even his sprint speed is a little appealing and explains why he can get the occasional stolen base. But his plate discipline is pretty week as you can see. Those are the kinds of rates that’ll really give you some pause in points leagues. He hasn’t drawn a single walk this month and he’s striking out 33% of the time in the month of June. On the season, he has a 24.1% strikeout rate and a 4.1% walk rate. Not the greatest correlation.

What is the rest-of-season outlook for Bethancourt? Currently there is a slight issue in regard to playing time, but the A’s are still squeezing him into the lineup. He’s still behind Sean Murphy on the depth chart, but Oakland can still play Bethancourt at first base, DH, or maybe even the outfield. Even after Sunday’s win against the Royals, the Athletics sit at just 23-45. They’re in dead last in the division and hold the worst record in baseball. It’s pretty clear that they won’t be buyers at the MLB trade deadline. In fact, they’re probably sellers.

It’s incredibly possible that Sean Murphy is dealt given his affordable contract and he packs power at a position where most teams need a little help at catcher. If Murphy is dealt that opens up an easier path for Bethancourt to get more reps behind the dish. Truthfully, once he gets the eligibility we don’t care if he actually starts at catcher, but Murphy’s absence would ensure consistent plate appearances.

The other concern is whether the Athletics get desperate and, in an attempt to sell tickets, call up Shea Langeliers later in the season once they’ve officially traded away some pieces. By all accounts, Langeliers is seemingly ready to get the call. He was Atlanta’s first-round pick back in 2019 but was traded to Oakland as part of the Matt Olson deal this past offseason. Langeliers entered 2022 as the 40th-ranked prospect in Major League Baseball and he’s done nothing but rake this year. At Triple-A he’s slashing .279/.371/.510 with a dozen home runs and 40 runs scored in 56 games.

That’s kind of the narrative with Bethancourt though, isn’t it? There’s give and take with a player in his position. He’s flashing a great power profile but lacks discipline. There could be a solidified role for him if Murphy is dealt, but Langeliers seems likely to be called up and I’ll probably be previewing him when that time comes. But I’m also a “strike while the iron is hot” kind of fantasy manager, especially at the catcher position. Bethancourt is a player that has bounced around the majors and minors since 2017 and even had a brief stint in the KBO. Oakland is in a place where he could be a bit of a diamond in the rough and he could perform as a top 20 catcher, maybe top 15, over the rest of the season. But of course, we need a little more alignment in the stars.

The next two scoring periods could be very important for Bethancourt. The A’s are off on Monday, but then have a three-game home stand against Seattle. Bethancourt is only hitting .169 in RingCentral Coliseum (I swear the name of that place changes like the wind). Following the brief mid-week home stand the Athletics go on the road for ten games against the Royals, Yankees, and Mariners. This is where I mention that Bethancourt has hit .319 on the road so far this season. Like I mentioned at the beginning of this article, you don’t grab him now. But keep him on your watch list in case the bat stays hot and he finds himself on more favorable grounds following the trade deadline. He’s available in plenty of leagues so the demand isn’t there yet, but be sure to make the move if you like what you’re seeing over the next month.