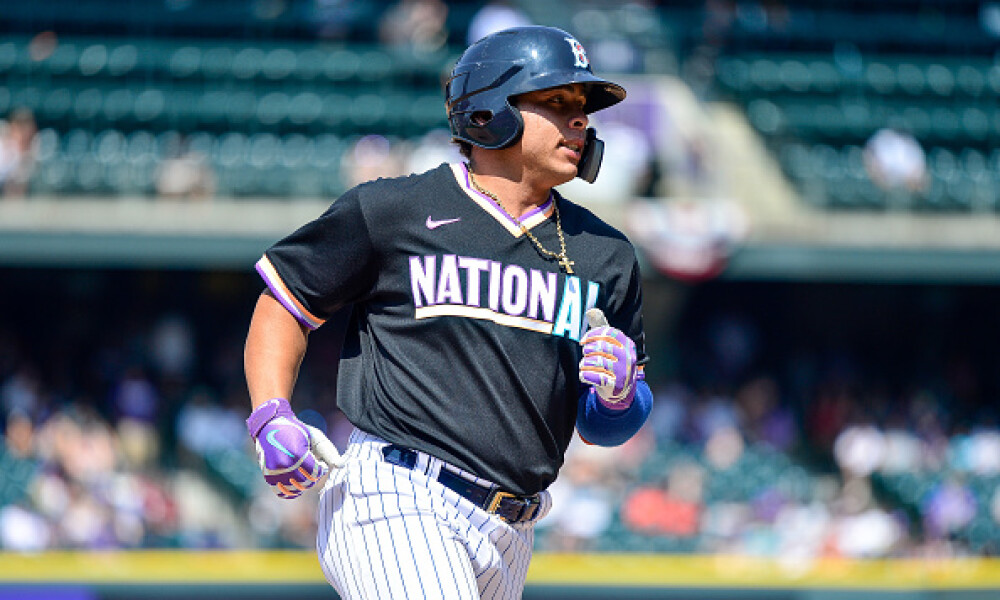 Analyzing Major League Baseball’s top prospects hasn’t been a foreign concept during the Fantasy Baseball Player Spotlight Series. At the catcher position we’ve previously taken looks at Adley Rutschman and Gabriel Moreno. Both players received the call to the big leagues this season and it looks like we may not be far off from another. Over the weekend, the New York Mets promoted their top prospect, Francisco Álvarez, to Triple-A Syracuse. Alvarez is a prized prospect as he entered the 2022 season ranked as a top ten player in MLB’s Top 100 Prospects list and after raking at Double-A for the first portion of the season he’s getting a worthy promotion to the next level. But could we potentially see him get the call in 2022 and could he be a player worthy of our attention in fantasy baseball?

MLB’s official website still lists Alvarez’s ETA for 2023. That makes sense when you take a step back from personal feelings and examine what we have with Alvarez. For starters, he’s still just 20 years old and has some growth and maturity on the horizon to develop successful big-league hitter. That’s not to say he doesn’t have raw talent, he absolutely does. So far through 67 games at Double-A, Alvarez has slashed .277/.368/.553 with 18 home runs, 47 RBI, and 43 runs scored for the Binghamton Rumble Ponies. Over the last two seasons in the minors, he has 42 home runs. It’s become a little too clear that he needed a bigger challenge and that will start in the coming week, but he was able to flex some power in front of Max Scherzer a few days ago.

Alvarez may make the transition at some point to first base or designated hitter if the Mets want to prolong his MLB career. He flaunts a ton of raw power, but plate discipline is still something he needs to work on. Through High-A and Double-A he has a 24% strikeout rate to go with a 12% walk rate. As soon as he gets the call to the big leagues those numbers likely widen in the wrong directions. We typically see young prospects struggle with plate discipline at the highest level. Whether it’s because they want to make a good first impression or they aren’t used to the level of talent against opposing pitchers, top prospects have their struggles. It happens. Perhaps a big takeaway from Alvarez’s debut at Syracuse will be how he handles the pitchers at that level. Time will tell.

While Alvarez is likely held down until 2023, what are the odds that he gets a late-season call up to the show this year? The Mets could use another right-handed hitter and if he cruises through pitchers at Triple-A maybe we see Alvarez in the Big Apple before he can legally sip on some booze. The Mets are in the midst of a very good season and entering Independence Day they have a 3.5 game lead over the defending World Series Champions, Atlanta Braves. Atlanta’s made a strong run to close the gap the last month, but the division is still New York’s to lose and once rosters expand, the door is still open for Alvarez to make the next step.

Currently, the Mets depth chart at catcher lists James McCann atop the list. McCann recently came off the IL after missing nearly six weeks with a hamate fracture. Since his return last week, McCann is 2-for-18 and on the season he’s slashing .174/.253/.246. McCann’s job isn’t in serious jeopardy because it’s still entirely possible that if Alvarez is brought up they utilize him at DH. Between Dominic Smith and James McCann, they’ve contributed one total home run this year so there’s certainly room for an upgrade.

Is that upgrade Alvarez though? With the upcoming MLB Trade Deadline in four weeks the Mets will observe their needs closely while keeping a watchful eye on their top prospect. They are likely buyers especially with Max Scherzer and Jacob deGrom both on the mend in their rehab assignments. We’re roughly at the halfway point of the regular season and the Mets currently sit 19 games over .500 at 49-30. They’re clearly contenders and should be looking to improve their team as they see fit at the trade deadline. If the Mets acquire a big right-handed bat, I’d say it’s unlikely they bring up Alvarez. However, if Alvarez crushes opposing pitchers during his tenure at Syracuse then I’m sure the brass within the Mets organization will consider calling up their prized prospect.

Could Alvarez possibly be moved to bring in a big piece to bolster the Mets lineup? Per multiple reports, that’s unlikely. It does sound like Alvarez is one of the unmovable pieces along with Brett Baty and Alex Ramirez. The Mets preferred trade chip at the deadline is likely Mark Vientos, who has an .845 OPS through 56 games with 14 home runs at Triple-A. It would take a monster of a haul for the Mets to part ways with multiple top prospects and the Mets would have to feel very good about their postseason chances to pull the trigger on such an offer.

If I were a betting man, I’d say it’s unlikely Alvarez gets the call this season. Alvarez is still too young and it’s not like the Mets are in a position to just try and sell tickets by bringing him up. But it’s still a fluid situation and anything could change over the next month especially if he performs well at Syracuse. For now, he’ll be a player worth watching but not someone that needs to be grabbed off your league’s fantasy baseball waiver wire with the mindset that he’ll contribute in August and September. Let’s see how the next month shakes out, but it looks like Alvarez will likely be a player we talk about when fantasy baseball mock drafts start up next March.