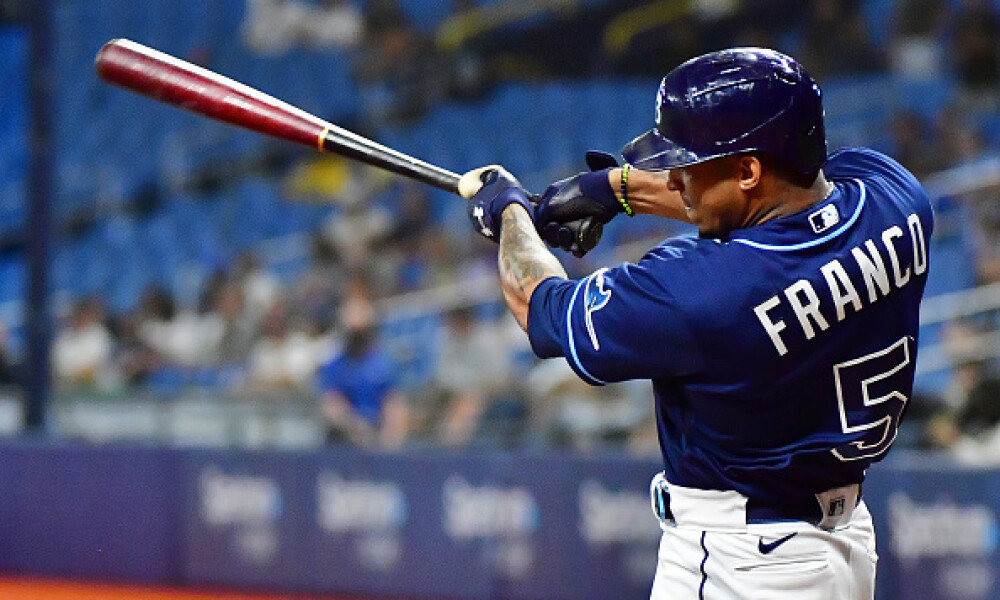 Streaky as they come, Ramirez continues racking up counting statistics with 11 runs, four home runs, 12 RBI and six stolen bases over his last 12 games spanning two weeks. Within his 57 plate appearances in this time span he's slashing .320/.404/.700 with seven walks and seven strikeouts. He's produced 43 batted ball events with six barrels (14 percent) and 19 hard hits (44.2 percent). It feels like he's underrated every year and produces across the board.

Coincidence his team's in the midst of a 12-game win streak while Stanton's launched five home runs with 10 RBI over his last 12 contests? It's remarkable the slugger can look lost, then lock in with a power surge he's currently amidst. He's hitting .333/422/.795 the last two weeks with eight runs over 45 plate appearances. He also leads the majors with nine barrels and in 28 batted ball events (32.1 barrel percentage) with 17 hard hits (60.7 percent).

Remember the talented rookie's slow start at the dish? Neither do those with him on their roster. Franco's riding a 26-game on-base streak during his Age-20 season. In the American League, there's only been three longer such streaks at his age or younger with Franco tied with Al Kaline entering this weekend's series versus Baltimore. During his streak, Franco's slashing .324/.389/.549 with 26 runs, 10 doubles, two triples, three home runs and 19 RBI over 113 plate appearances. He's also walked nine times (8 BB%) versus 13 strikeouts (11.5 K%) showing signs of growth in his plate discipline.

Once the darling of all the waiver wire articles during his absurd power stretch, Brinson's regression over the last two weeks evidenced in his .111/.167/.156 slash line his last 13 games covering 49 plate appearances. He's scored four runs with two RBI and a stolen base, but hit no home runs. Good news, he's only carrying a 14.3 strikeout rate but it comes with a .044 isolated power and a negative six wRC+. Guess which statistics those who added him received? The hot streak or the corresponding drop in production?

Although he's not hitting for average, it's never been his calling card. Gallo's recorded 46 plate appearances in his last 11 games with a .162/.326/.514 slash line, eight runs, four home runs and eight RBI. So, he's still producing power but with a low average. But, of his last 14 batted ball events in this sample, he's accrued five barrels (35.7 percent) and 11 hard hard hits (78.6 percent). Simply reducing his 50 percent strikeout rate would boost his average with more batted balls in play. Watch his at-bats in Oakland closely this weekend and keep him active hoping a hot stretch lies in the offing.

Perhaps one of the most hotly debated players in 2022, where Story signs along with his finish this year could make him a polarizing figure in fantasy. His last two weeks do not bode well since he's hitting .150/.222/.350 with eight runs, one home run and four RBI with a .200 isolated power. Health may be an issue, but he's generated one barrel his last 28 batted ball events (3.6 percent) and 13 hard hits (46.4 percent) putting him under intense scrutiny through the end of the season while assessing him for next season. Stay tuned.

While his team fades from the playoff chase, Goldschmidt's surging with 11 runs, three home runs, 10 RBI and three stolen bases his last two weeks in 12 contests. He's also produced 46 batted ball events with eight barrels (second most in the majors to Stanton) and a 52.2 hard hit percentage fueling a .373/.411/.667 slash line in this sample. Then check out his expected numbers below and think about more power on tap with September on the horizon:

Helping his team snap a 19-game losing streak, Santander finally appears healthy and productive. He's racked up four home runs with six RBI his last 12 games over 46 plate appearances with a .267/.283/.600 slash line but with a 32.6 strikeout rate. While his power peak may level out, there's room for growth in his average and wOBA if he displays a bit more plate discipline:

With the National League MVP race wide open, could a strong finish put Muncy over the top? There's still a chance his team wins the National League West and owns the best record in baseball. Plus, he's proved capable of production despite a low average his last 12 games with five home runs and 22 runs plus RBI despite a .200/.280/.578 slash line. There's no doubting his power, but if the average and his slugging rate move towards his expected numbers, a hot streak may be on tap soon fueling his campaign for end of season hardware: