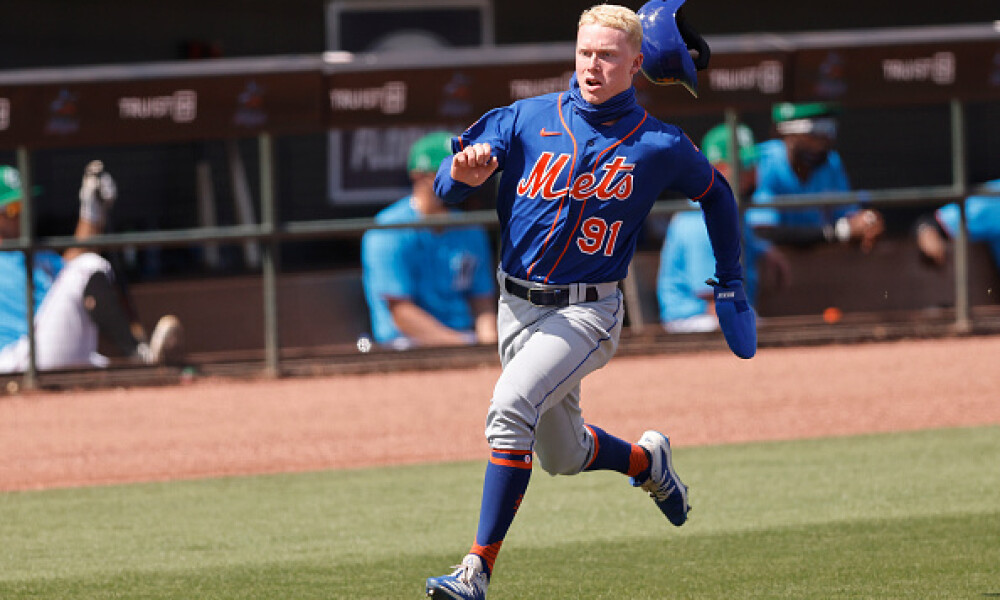 Last week we spent some time talking about the guys that aren’t getting a lot of attention inside the top-50 and this week we’ll do the same for the prospects that are sitting in the second half of the top-100. Again, it may sound oxymoronic to say a guy is unheralded while being in the top-100 rankings, the rankings most people pay attention to when prospect hunting, but not everyone can get the same coverage. Some prospects are the flavor of the week for a while and that lets others slip through the cracks, and the same can be said of the players who are from teams that don’t get the media attention in general. All of these players are worthwhile knowing about as they will be fantasy impact players soon enough.

Rankings are based on my own personal rankings that get updated throughout the season with the most recent update readable here. Check my Twitter for the upcoming Prospect Report topics.

Hunter Bishop, OF SF (No. 52) - Bishop has quite the set of skills to be a guy that not a lot of people are talking about. The Giants’ outfielder has plus raw-power and plus-speed that could lead to him being a 30-30 caliber talent, though the batting average will always be a thing to be desired. The Hit tool comes in at a 45 on the scouting scale which should put him in the .240-.250 range. In the 35 games as a pro, having been drafted in the first round of the 2019 draft, he’s posted five homers and seven steals all at Class-A levels. It’ll still be a couple of years before he’s up as the Giants typically like to fully develop their players, much like the Rays, but now is a great time to stash a potential 30-30 guy before he gets to Double-A and really pops on radars.

George Valera, OF CLE (No. 55) - Valera is one of the top prospects for the Indians and that’s saying something as I have them as the deepest system in the league with 16 players in the top-250. The outfielder’s calling card is his 60-grade Hit tool that should see him hitting .300 in the majors or at least close to it and he couples the raw skill with an advanced approach at the plate and understanding the zone. His power and speed are both above-average at times and have led to him posting 11 homers and 11 steals in 73 total minor league games. He’s also been a plus outfielder defensively too with 11 outfield assists in 51 games last year. The 20-year-old lefty-hitting outfielder has an ETA of 2023 with the upside of being a .300, 25-plus-homer, 15-plus-steal fantasy asset.

Pete Crow-Armstrong, OF NYM (No. 57) - Crow-Armstrong may be a bit more known for a few different reasons than perhaps others on this list. His mother was the mom in Little Big League, his dad is an actor as well, and he played at Harvard-Westlake HIgh School which is known for Jack Flaherty, Lucas Giolito, and Max Fried, and then there’s the fact that he was injured earlier this year and underwent shoulder surgery which made news. It’s really the skills he possesses that should make him more known. He is a defense-first centerfielder right now with the upside of being a quintessential leadoff hitter who can be a nuisance on the basepaths with his 60-grade speed. When all is said and done, he should be a .280 or better hitter with 30-plus steal potential while playing Gold Glove defense in center field.

Garrett Mitchell, OF MIL (No. 64) - It’s been a while since the Brewers have had a prospect this well thought of outside of Keston Hiura but Mitchell is on track to be the next impact bat for Milwaukee. There’s a chance that Mitchell had the best overall set of tools in the 2020 draft class but he fell to 20th simply because of just one year of solid production at UCLA. His best tool is the 70-grade, or double-plus, speed followed quickly by his 60-grade arm and fielding skills with his hit and power tools coming in above-average. If he can continue to show consistency with his left-handed swing, the tools will really have the chance to shine as he should move relatively quickly through the Brewers’ system starting at High-A. He could be a legitimate threat to his .280 with 35-40 steals and 20 home runs with a profile that’s similar to Trea Turner.

Shane Baz, RHP TB (No. 66) - Baz was the PTBNL in the Chris Archer trade and since then has mostly worked a bit under the radar in the deep Rays’ system as he’s now made his way to Triple-A with a shot to be up next year. Baz has everything he needs to be a future ace with a four-pitch mix that is still developing in some regards. The fastball-slider combo is the key to the repertoire with them being 70-grade and 65-grade respectively. The fastball has hit triple-digits but mostly sits in the mid-90s with nice, late, movement and pairs well with the hard biting slider that are major out pitches for the righty. The changeup and curveball are the weapons though the changeup is used more frequently and is better than the curve. The biggest thing standing in his way has been the below-average command that’s led to an elevated walk rate most of his minor league career but has improved it considerably this year with just five walks in 41.2 innings across two levels. He gets overlooked with Wander Franco, Vidal Brujan, Xavier Edwards, and previously Shane McLanahan ahead of him in the Tampa system but Baz should slot in behind Tyler Glasnow in the Rays rotation starting next year.

Matthew Liberatore, RHP STL (No. 70) - Liberatore was one of the top high school pitchers in the 2018 draft class and somehow fell to 16th overall in the first round to Tampa Bay before being traded in January of 2020 in the Randy Arozarena deal. He’s now the top pitching prospect in the Cardinals’ system. The fastball anchors the arsenal while sitting in the low-90s with nice movement and touching 96. The curveball is right there with the fastball in terms of grade and is a true downer, 12-to-6 curve that is an out pitch while the changeup is the third pitch in the repertoire with nice deception off the fastball. He’s since added a slider to the equation that’s still developing but already has the making of a fourth above-average pitch. Still just 21 years old, he could be one year away from making the Cardinals’ rotation where his floor of a number two starter is realistic.

Quinn Priester, RHP PIT (No. 71) - The Pirates have always been infatuated with taking prep pitchers in the draft and did so with Priester in the 2019 draft. His four-pitch mix is made up for two plus offerings and two at least average pitches with the fastball and curveball being the best two pitches. The velocity is there on the fastball, sitting 97-98 on the four-seamer while the curveball works in the low-80s with tight spin to add late break. Priester’s time at the alternate site proved big for him as he improved his other secondary pitches in the slider and changeup with both flashing above-average at times. The next frontline starter of the Pirates isn’t Mitch Keller but is instead Priester with an ETA of 2023.

Tyler Freeman, SS CLE (No. 75) - A bit of a throwback middle infield type, Freeman was a supplemental second round draft pick in 2017 for Cleveland. He’s since taken his time moving through the system to reach Double-A this year after time at the alternate site in 2020, and has done well at honing his craft. The hit tool comes in as a plus-tool for the 6’0”, 190-pound, righty with the rest of his tools being in the average-to-above-average range. With Freeman it’s more of a sum of the parts thing that moves him up the rankings as he’ll be a reliable everyday player who is likely to play second base long-term. Think of him as a speedier Adam Frazier type when all is said and done who should steal about 15 bags a year while hitting around .300.

Robert Puason, SS OAK (No. 86) - Perhaps the prospect the longest way from being MLB-ready on this list, Puason is still just 18 years old and just now making it to A-Ball for Oakland after being signed in the same international class as Jasson Dominguez. The switch-hitting shortstop is a defensive wonder with elite speed at the top of his profile while the hit and power tools are still coming around. He’s still very lanky at 6’3” and 165 pounds so the power will likely come as he fills out physically and gets more time stateside in game action. When all is said and done, Puason profiles as a smooth defender at short with 25-steal speed and 15-homer pop while hitting .260-.270, though that’s likely still three years away for the young Dominican.