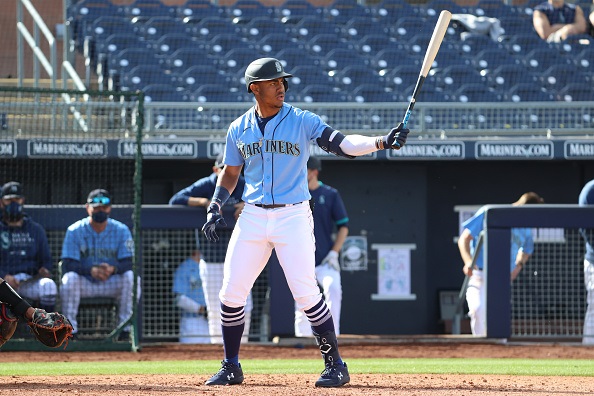 Oswald Peraza, SS NYY - Part of the 2016 international signing class that allowed the Yankees to acquire Giancarlo Stanton and Jameson Taillon with other members of it, Peraza has the best overall tools of any infielder in the Yankees system. That’s not hyperbole either. He has four plus-tools and has met every aggressive assignment given to him since coming stateside including this season at High-A as a 20-year-old. In 19 games, he’s hit five homers with a .276 average and 11 steals. Peraza has smooth actions up the middle defensively with a plus arm and plus fielding tool in tow and in 159 games across his first three pro seasons he stole 44 bags in 54 attempts. He’s a prototypical leadoff hitter type who should develop 15-20 homer power while being a fit at either short or the keystone. ETA: 2023

Julio Rodríguez, OF SEA - Rodriguez was caught in the crosshairs of the comments of the Mariners former exec this offseason but it’s not like he wasn’t a top prospect before that. He’s now gotten off to a hot start at High-A to let his bat do the talking for him and make the Mariners start making decisions on his progression. In 19 games, Rodriguez is slashing .325/.413/.600 with five homers, 19 runs, 15 RBI, and four steals. The 20-year-old might have been a bit overshadowed by Jarred Kelenic but the tools Rodriguez possesses are just  as good as Kelenic’s for the most part with better power and a bit less speed. He’ll give the Mariners a second five-tool outfielder coming up in two years as he’ll be up next year and will be vying for All-Star nods with his teammate.

Grayson Rodriguez, RHP BAL - Rodriguez was taken in the first round of the 2018 draft with the hopes that he’d be the next ace of the Orioles, and so far he’s lived up to that billing including with his hot start at High-A this season. Through 18.1 innings for Aberdeen he’s posted a 31:4 K:BB ratio and a .141 BAA in four starts. The righty uses a four-pitch mix, three of which are at least plus if not double-plus, to keep hitters at bay and it all starts with his great upper-90s heavy sinking fastball that gets tremendous downhill plane from his 6’5” frame. The slider and changeup are both plus secondary pitches as well with excellent movement and deception respectively while the curveball is still effective, though an average offering right now. Rodriguez repeats his delivery well and has the size and frame and stuff to be the frontline starter the O’s need with an ETA of the second half of 2022 likely.

Cade Cavalli, RHP WAS - The Nationals have been known to love taking pitching in the top of their drafts recently and have grabbed college arms with the last two with Cavalli being the latest in 2020. The righty from the University of Oklahoma product has four pitches that are all at least above-average to plus with his arsenal really taking off during his junior year as a Sooner. He has a riding fastball that sits comfortably in the mid-to-upper-90s and touches 99 while taking 15 mph off for his curveball that has power and depth and makes pro hitters look silly at times. Cavalli is still developing a slider/cutter and changeup that are easily above-average but either one should hit plus with more development time and make him the frontline starter Washington drafted him to be. The big righty has posted a 34:8 K:BB ratio in 22 innings at High-A start the year and should reach Double-A to finish this season setting the stage for him to be up in Washington mid next year after previously impressing coaches staff at the alternate site last year.

Heriberto Hernandez, OF TB - Hernandez was part of the return for Nate Lowe from the Rangers and since then the Rays have been doing what they do best with intriguing bats, playing him all over the diamond. He came over as a catcher but hasn’t played behind the dish this year yet and is instead playing all three outfield spots with an intriguing mix of offensive tools. The key tool is his plus-power followed closely by his above-average hit tool and arm while the fielding is taking strides at being average, the speed is well-below average. He does have three homers and three steals this year but that’s mainly due to the lack of the low-minors pitchers and catchers ability to stop opposing running games. He ultimately profiles as a .270-.275 hitter with 28-33 homer upside but the defensive spots are still to be sorted out.

Noelvi Marte, SS SEA - One of the fastest risers through prospect rankings, and by my rankings the third Mariners’ farm hand in the top-11 overall, Marte has been putting on a show at Low-A Modesto in his first 18 games with a .355/.437/.579 slash line, four homers, 18 RBI, 17 runs, and four steals. At just 19 years old, Seattle has been aggressive with his assignments in the past and he’s been rewarding them as his advanced tools shine through with plus-speed, above-average power, fielding, and arm tools, and at worst an average hit tool. Most including myself believe that when all is said and done he will have five at least above-average tools as his approach at the plate improves. Marte may move to the hot corner eventually but the offensive profile fits there as well. ETA: 2023

Cole Wilcox, RHP TB - When Wilcox was sent from San Diego to Tampa Bay in the Blake Snell deal this offseason, it was a big boon for Wilcox in terms of heading to the premier organization in developing young pitching. He’s already started paying dividends in his very first taste of pro ball with a 14:2 K:BB ratio in 17 innings and a 0.82 WHIP in four starts for Charleston. He uses a three-pitch mix of a mid-90s fastball, an east-west slider, and a fading changeup that range from 55-grade (slider) to 65-grade (fastball) to get hitters out. The delivery does need work in terms of adding deception and hiding the ball a bit longer as well as getting better velocity separation between his secondary pitches but that will come in time. He will either be a number 2-3 starter or a high-leverage bullpen piece with an ETA of 2023.

Blake Walston, LHP ARI - Taken in the first round of the 2019 draft, Arizona was happy to get their hands on the North Carolina high school player of the year and since then, they’ve been even happier to see the early growth already. The 6’5” lefty is a bit lanky at 175 pounds but that’s better than he was coming out of high school and the velocity has already ticked up as he’s now sitting in the mid-90s with the fastball. His time at the alternate site last season proved that he already has the best curveball in the system with tight spin and depth that works to both handedness of hitter. The slider and changeup are both behind the other two pitches but have room to grow and become above-average pitches giving him four pitches to work from as a future frontline starting option for the Diamondbacks. ETA: 2023

Eury Perez, RHP MIA - It’s time for a deep, deep dive here. Perez was signed in July of 2019 by the Marlins out of the Dominican Republic. After growing four inches and 35 pounds since signing, he put on a show at the alternate training site last year at just 17.5 years old. Now, he’s putting his stuff to work at Low-A Jupiter with a 19:5 K:BB ratio in 14 innings across four starts with a .163 BAA. His fastball is already up to the low-90s from the upper-80s when he signed and the hope is he gets to the mid-90s as he physically matures. The changeup and curveball are still raw weapons too but the spin and feel for them are there and he just needs more work and instruction on throwing them. The upside is there for him to be a mid-rotation starter but there is a lot of polishing to happen first. ETA: 2024