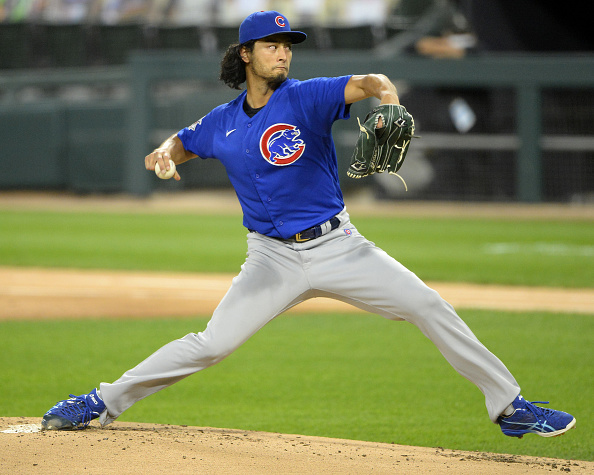 Somewhere A.J. Preller takes solace in providing constant updates in the offseason while most teams remain dormant. Perhaps Preller's listening to an old one hit wonder spotify playlist featuring Biz Markie, "Yu, got what I need...". All kidding aside, the Padres strike again taking on the Cubs salary dump and Cy Young runner-up from the National League last season in Yu Darvish . It's been a remarkable evolution by Darvish the last two seasons and with three seasons left on his contract with Chicago entering what appears to be a steep rebuild, the prospect return feels light:

Details on the trade, per sources:

Padres would get: Darvish, Caratini

Teams willing to take on payroll control the market entering 2021. Of course the Padres remain one of the only active participants and this note on how they added to the rotation for the next two seasons without making a major sacrifice underscores the importance of building a deep farm system:

You're not supposed to be able to acquire premium, proven, controllable starting pitching in trade.

The Padres have acquired Clevinger, Snell and Darvish in the past 6 months.

In July, Baseball America ranked 6 Padres among top 100 MLB prospects. Padres still have 4 of them.

Although both trades (Blake Snell covered here) and Darvish need time to become official due to medicals, San Diego also entered the free agent market adding a talented infielder from the KBO:

Another splash from the Padres.

Thinking Preller's done re-tooling this roster would be foolish. With the added infield depth, the strong rotation and remaining top prospects, San Diego may move some other pieces to clear room to add a closer from free agency or address any other need on the team. Could they move Wil Myers ? Perhaps. If the universal designated hitter returns for 2021, this would be a moot point. Add in Jake Cronenworth as a super utility player or a trade chip as well. As for all of the fantasy elements of this trade and signing, it's time to dive in.

Darvish to San Diego Plus Kim Takes Over at Second Base

Beginning with Darvish, the Padres added a top-of-the-line starting pitcher to help anchor a strong rotation. During the truncated 2020 season, Darvish went 8-3 over 12 starts spanning 76 innings with a robust 93:14 K:BB, 2.01 ERA, 3.14 SIERA and 0.96 WHIP. Lowering his walk percentage by three points helped Darvish cut his WHIP below 1.00 and resulted in a career best 26.6 strikeouts minus walks percent.

For a second straight season, Darvish deployed his cutter the most with a 43.7 percent usage rate. All told, his arsenal runs deep with a bevy of pitches allowing Darvish to improve his whiff percentage for the second year in a row up to 32.2 percent. Here are all of his swings and misses courtesy of Statcast: 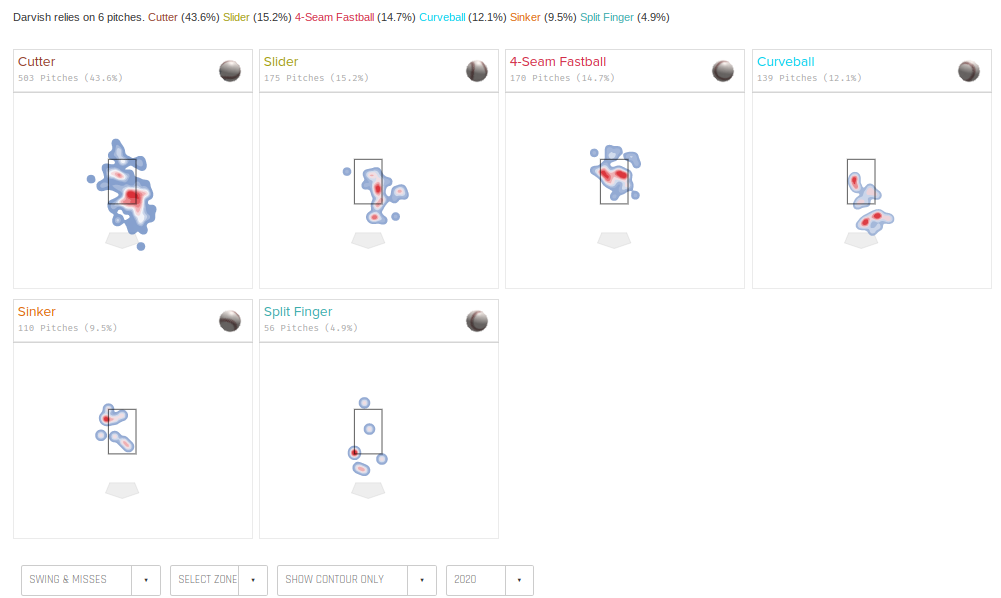 Expanding his statistics another step for a larger sample size, dating back to the start of the second half of 2019 through the end of last season, his numbers still stand out:

Against all of his peers who met the requirements as qualified starters, here's where Darvish's numbers in this time frame rank:

Another key component of this deal, Darvish's "caddy” Victor Caratini will be accompanying him to San Diego. Why would this be important? Check out Darvish's career splits by catcher:

What stands out the most, Darvish's 2.80 career ERA with Caratini behind the dish with an impressive 248:30 K:BB in 196.1 innings. Caratini's presence in this trade should help ease the transition for Darvish to his new franchise. As for his projection, here's an early one from Steamer:

Now, this comes with a grain of salt. Pitchers in the KBO do not throw with the same velocity of the major leagues nor do they feature the nasty secondary pitches Kim will need time to adjust to. While ZiPS provides a very beneficial projection for Kim, it should be tempered a bit, especially if there's a work stoppage or an abrupt start and stop to the preseason like 2020. Still, here's Kim's projection from an article by Dan Szymborski of Fangraphs from October:

Depending on where Kim hits affects how he fares in runs and RBI. As for his home runs, based on KBO parks being smaller, it feels a bit high. Watching his games covering the KBO, Kim plays fluid in the infield and his speed should translate. Patience may be required for Kim. If he reaches anywhere near the slash lines predicted by ZiPS, he's worth a gamble but it feels like Kim's price may soar based on his new home and the hype around the offense. Focus on where he hits, it sets the baseline to his overall production. And before wrapping up the Padres side of this, a late breaking tweet suggests Cronenworth or Kim could get playing time in the outfield:

The Padres will consider trying Jake Cronenworth and even Ha-seong Kim in the outfield, if only to see how it looks. Cronenworth has limited experience beyond the infield. Kim has not officially appeared in the outfield in his pro career. The universal DH, of course, would help.

But, Davies may be able to mine some help from his new teammate Kyle Hendricks who relies on command with a plus-change-up. Tutelage and honing of his pitch mix which featured ten percent more change-ups in 2020 may help Davies stave off migration to the mean to outpitch his peripheral statistics. For fantasy purposes, he does not move the needle due to a lack of strikeout upside.

As for the prospects, Reginald Preciado ranked 11th in the Padres system as a 17-year old shortstop. He's yet to play in the minors. Owen Caissie represents San Diego's second round pick (45th overall) in the 2020 draft and placed 13th in the team's prospect ranks. Shortstop Yeison Santana appeared in two seasons of Rookie ball and should make the jump to Single-A for the Cubs. Last, Ismael Mena also plays outfield and has yet to appear in the minors.

It's tough to justify this deal. However, the return feels light due to Darvish's contract, so Cubs fans need to be patient. Still, this feels like the first step in a potential rebuild despite the lack of transparency by the front office:

"I don't think anybody's tearing anything down."
--Tom Ricketts, Nov. 23

Long story short, Darvish remains a strong target for fantasy with his personal catcher included in the deal. San Diego may not be done re-working the roster while making it more fluid and pliable to compete with the Dodgers. Chicago may sell off a player or two more but still contend in what's shaping up to be a weak National League Central.

As always, stay with Fantasy Alarm to remain ahead of the competition across all fantasy formats. Until next time, stay safe and be well.