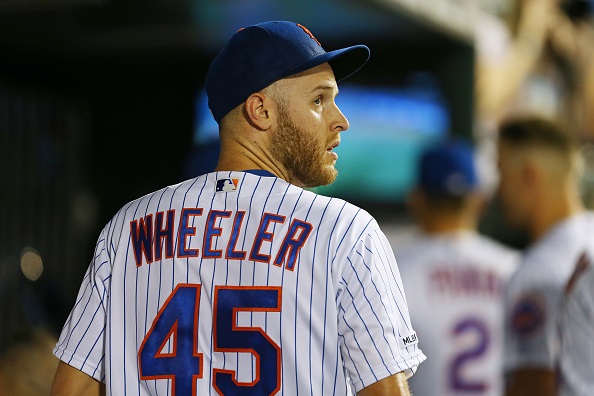 In a refreshing change, the winter hot stove continues to burn with three free agent signings. Cole Hamels heads to Atlanta on a one-year deal to add depth to a young rotation and will not block a stable of young talent on its way in the years ahead. Zack Wheeler escaped New York agreeing to a free agent contract with in-division rival, Philadelphia. It remains to be seen if Wheeler can unlock his arsenal but with health and more elevated fastballs, he could reach 200 strikeouts. Mike Moustakas learned a new position last year, adding second base to his resume and it paid off with his four-year contract with the Reds. Could a move to Great American Ballpark allow Moustakas to record his first 40 home run season? Time will tell. Here’s the fantasy fallout of these three free agent signings.

After notching seven straight 200-plus inning seasons, Cole Hamels has failed to reach at least 150 in two of the last three years. Hamels started 2019 strong but could not recover after an oblique injury:

For the season, Hamels finished with seven wins and seven losses over 141.2 innings with 143 strikeouts against 56 walks. His ERA ended at 3.81 with a 4.39 xFIP and 1.39 WHIP. Good news, Hamels rediscovered his change-up last season fueling his hot start prior to his injury:

For all you @Braves fans, here's a short compilation of the new CH you're getting from Cole Hamels :

Bad news, it could flatten a bit in Atlanta’s home park. How Hamels pitches in Spring Training could be a key to his 2020 season. Given his past pedigree, Hamels will remain viable in fantasy but at what level remains to be determined. Steamer projects Hamels for 10 wins, 164 innings, a 155:60 K:BB, 4.50 ERA and 1.36 WHIP. Less than inspiring. However, it feels like Hamels could be motivated to recapture his hot start from last year.

Wheeler to the Phillies

Firing a shot across the bow, Philadelphia added Zack Wheeler to its rotation to slot in behind Aaron Nola . This provides the team with a much needed upgrade. Wheeler won 11 games last year with a 3.96 ERA and 1.26 WHIP. He also missed 200 strikeouts by five in 2019. Always considered a talented pitcher, fantasy owners will try to discern if Wheeler’s reached his peak or if another level remains?

Wheeler recorded a 23.6 strikeout percentage and a 10.4 swinging strike rate. Here’s a look at his arsenal courtesy of Statcast:

Not too shabby. However, if one imagines Wheeler elevating more fastballs with his ability to generate swings and misses at the lower part of the zone with his change-up, splitter, curve and slider, well, it gets interesting. Especially when seeing his swinging strike pitch plots only:

Steamer projects Wheeler for 11 wins over 184 innings with a 177:53 K:BB, 4.26 ERA and 1.26 WHIP. Pitching in Philadelphia could hurt his WHIP, but if Wheeler works on elevating his fastball and mixing up his pitch usage, he could surpass last year’s strikeout totals if he makes 32 starts. If he keeps his ERA at last year’s level or lower, he’s actually a nice buy at his present price point.

Not only will the short porch in right field benefit Moustakas, some of his past fly balls to the opposite field could also carry out. Add in second base eligibility and suddenly Moustakas owns more fantasy appeal without an increase in his draft day cost so far. Owners who target speed early can round out their profile taking Moustakas at second base without sacrificing average.