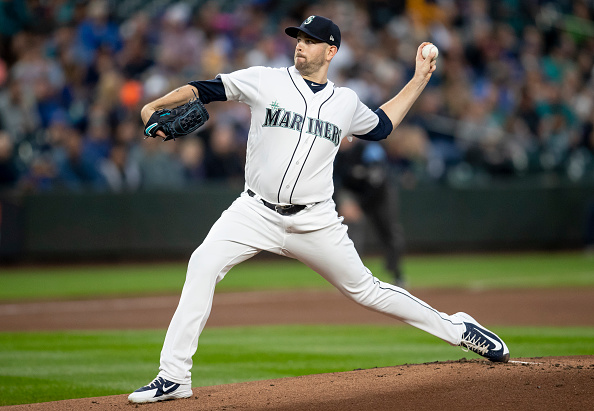 It happened. After the trade talks centering on James Paxton being on the move, Seattle agreed to trade him to the Yankees for a triumvirate of prospects on Monday. New York traded Justus Sheffield, Erik Swanson and Dom Thompson-Williams for the uber talented and oft injured Paxton. On the surface, it seems like the Yankees did not overpay for a clear need in the rotation and it seems the scouting community does not agree on Sheffield:

In talking with some scouts around baseball, they are less than impressed with what the M's got in return for Paxton. Many have questions about Sheffield's future as a starter and ability to throw enough strikes.

Not only does Paxton upgrade the Yankees rotation, two other deals flew beneath the radar with Kurt Suzuki signing a two-year contract with the Nationals and the Astros trading for Aledmys Diaz . Time to digest all the latest moves as the Hot Stove heats up.

Big Maple to the Big Apple

It’s taken time for fantasy owners to trust in James Paxton , but he set career highs in innings (160.1), strikeouts (208) and wins (11) in 2018. Although his ERA rose to 3.76, his FIP indicates it could be better, plus his WHIP repeated at 1.10 for the second straight season. Over the last three seasons, Paxton’s increased his workload in the majors, but his ground ball percentage has decreased.

Moving to the Bronx will be less than ideal if Paxton’s 41.1 fly ball rate and 34.4 hard hit percentage accompany him to his new home park. Paxton could increase his win total, but if he backslides in ratios, the fantasy impact could be minimal. Much of this will depend on how many starts and inevitably innings Paxton logs as a Yankee in the year ahead.

Not only will the ratios be important, but can Paxton add another pitch to his arsenal? Paxton relied heavily on his fastball last year throwing it just under 65-percent of the time according to BrooksBaseball.net. His slider can be devastating when it’s on, producing a whiff per swing rate of 39.5-percent as does his cutter with a 37.2 whiff per swing, but he only utilizes these pitches 21.5 and 14.4-percent of the time respectively.

Corey Brock reported Paxton wanted to incorporate a change-up more in the year ahead in his arsenal. Former teammates Marco Gonzales and Wade LeBlanc provided him with the blueprint for success with the pitch last year. It’s yet to be seen if Paxton can master this pitch, but it would provide a much needed wrinkle in his repertoire to survive the rigors of the American League East. Even if the change does not develop this off-season, here’s a look at Paxton’s arsenal courtesy of the Pitching Ninja:

Looking to his early projection by Steamer, it raises some questions. Steamer forecasts a 13 - 9 record with 185 innings, 214 strikeouts, 51 walks, a 3.25 ERA, 3.21 FIP and 1.13 WHIP. With the knowledge of fly balls on the increase, it will be tough for Paxton to record these ratios as a Yankee. Here’s his spray chart against from last season of baseballs hit as line drives or fly balls with New York as the overlay: 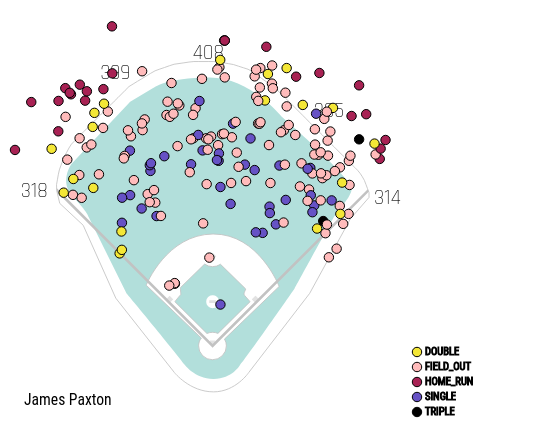 Not only will it be difficult for Paxton to reach 185 innings, especially given the Yankees potentially deep bullpen, but also his past difficulties staying healthy. New York can manage his innings to maximize his usage, but hoping for a repeat of last year’s numbers with a couple more wins along with a higher ratios seems reasonable. Plan accordingly.

Whether or not Justus Sheffield can stick in the rotation should not be a factor to fantasy owners, his path to innings and ballpark factors both improved appreciably. Between two levels last season, Sheffield won seven games against six losses over 116 innings with 123 strikeouts, 50 walks, 2.48 ERA and a 1.14 WHIP. He mixes a four-seam fastball with a change and slider but struggled with command logging a 13.2 strikeout minus walk percentage at Triple-A.

As the top rated Yankees prospect and the headline player in this trade, if he can stick in the rotation over his six years of control will determine how Seattle does in this deal with its fanbase. Here’s a look at the statement from General Manager Jerry DiPoto:

Trade is official. Here's a statement from Jerry Dipoto. pic.twitter.com/87ACtV2Koc

One of the underrated parts of this trade could be Erik Swanson. He recorded an 8 - 2 record across Double and Triple-A last year in 121.2 innings with a strong 139:29 K:BB ratio, 2.66 ERA and WHIP of one. Swanson relies on a low 90’s fastball with tremendous movement mixing in a slider and change. Control seems to be his calling card exemplified by his 23.5 strikeouts minus walk percentage at Double-A and 22 percent rate in Triple-A. Swanson would have been lost to the Rule 5 draft as a Yankee, so his inclusion in this deal makes sense for Seattle.

Athletic and toolsy, Dom Thompson-Williams represents a potential answer to the Mariners need at center field in the future. Thompson-Williams scored 63 runs with 22 home runs, 74 RBI and 20 stolen bases across two levels reaching High-A last year. He slashed .299/.363/.546 with a 8.3 walk percentage and 25.3 strikeout rate. Representing a work in progress, his ability to hit for power and steal bases seems like a rare combination of late. If he can make more contact as he rises in the Mariners system will eventually determine his ceiling.

Suzuki heads to the Capitol

Flying beneath the radar of the Paxton trade, Washington added Kurt Suzuki with a two-year contract. Not only did they pilfer him from a divisional rival, Suzuki’s been solid the last two seasons. Of catchers with at least 500 plate appearances the last two year, Suzuki ranks first in weighted on-base average (.351) and tied for third in weighted runs created plus (116). Over his 186 games in this time frame, he’s slashed .276/.341/.485 with 83 runs, 31 home runs and 100 RBI.

Suzuki’s also provided strong plate discipline the past two years walking 5.6 percent of the time compared to a 11.8 strikeout percentage. He’s improved upon his hard hit percentage (36.4 percent), hit more fly balls and upped his home run per fly ball rate. Of course, catchers can take longer to develop their offense, and Suzuki comes with some risk due to his age, but there’s worst catchers in fantasy.

Playing time will be a factor in his overall value, but he should be able to exceed his present Steamer projection of 75 games, 32 runs, nine home runs, 37 RBI and a .256/.314/.417 slash. Overlooking his last two years would be a mistake, especially since Suzuki carried over all his gains except for his home run per fly ball percentage. This seems like the outlier within his batted ball data.

However, taking the over on his Steamer projections given at least 95-to-100 games played seems well within reach, at least for 2019.

In an effort to provide depth, Houston traded for Aledmys Diaz from the Blue Jays for pitching prospect Trent Thornton, who like Swanson above, would have been open in the Rule 5 draft if he was not traded. As for Diaz, he could be an infield hybrid for the Astros but his fantasy impact takes a hit due to no clear path to at-bats.

For Toronto, Diaz bounced back with 55 runs, 18 home runs, 55 RBI, three stolen bases and a .263/.303/.453 slash line in 130 games. He notched a career best .190 isolated power. Plus, Diaz rebounded in regards to his home run per fly ball percentage (12 percent), fly ball rate (41.2 percent) and hard hit percentage (31.9 percent). Most importantly, especially in Minute Maid Park, Diaz upped his pull percentage to 47 last season. Here’s how his line drives and fly balls from last year would look in Houston: 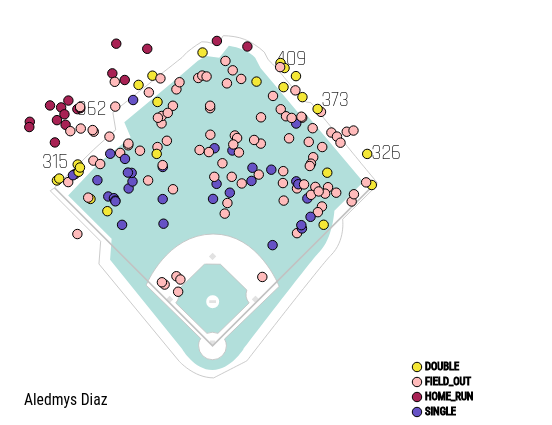 Any value tied to Diaz will lie within how many at-bats he can accrue with Houston. For now, it’s only a ripple in deeper formats, but keep him in mind if injuries affect the Astros again next year.

Be sure to stay ahead of the competition with all the great coverage on Fantasy Alarm.