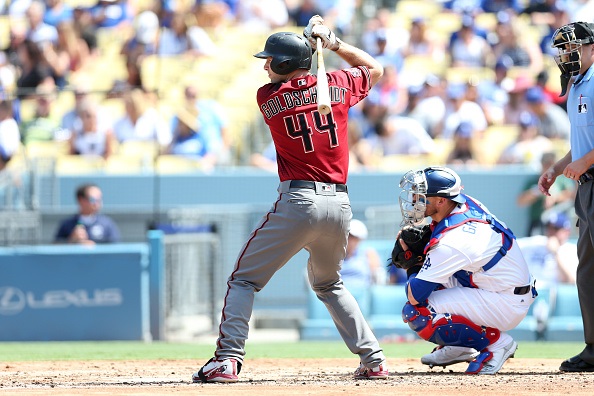 To the chagrin of greedy fantasy owners hoping Paul Goldschmidt would be traded to Houston, he will head to St. Louis for 2019 instead. Arizona received players who could fill need and under team control in return for a potential one-year rental. Luke Weaver , Casey Kelly and Andy Young head to the Diamondbacks with clearer paths to playing time as the team continues to tear down the veterans on the roster. Goldschmidt will look to cash in since he can become a free agent after the season unless the Cardinals can sign him to an extension.

In terms of fantasy, the move does not really affect Goldschmidt other than owners seeing his RBI go up in a deeper lineup this year. Both Weaver and Kelly could be wild cards depending upon how they perform with their new team.

After a slow start last year, many Paul Goldschmidt owners panicked trading him at his lowest point hoping to salvage their season. Over his last 100 games, Goldschmidt hit .334/.423/.608 with 25 home runs. He finished 2018 with 95 runs, 33 home runs, 83 RBI, seven stolen bases and a .290/.389/.533 slash line. His line drive percentage surged to 25 percent last season and he hit fewer ground balls. Most intriguing, Goldschmidt turned in his highest hard hit percentage of his career of 46.2 percent.

There’s no overwhelming fantasy impact with him going to the Cardinals. His three year totals of 318 runs, 93 home runs, 298 RBI, 57 stolen bases and .290/.389/.528 provide a stable fantasy baseline owners can trust. Due to his slow start, Goldschmidt’s early season average draft position actually makes him a bargain. Beneath the strong three year numbers above, Goldschmidt also owned a .235 isolated power, a weighted runs created plus metric of 141 and a 42.6 hard hit rate. Here’s a look at his batted ball data from the last three seasons of line drives and fly balls with St. Louis as the backdrop: 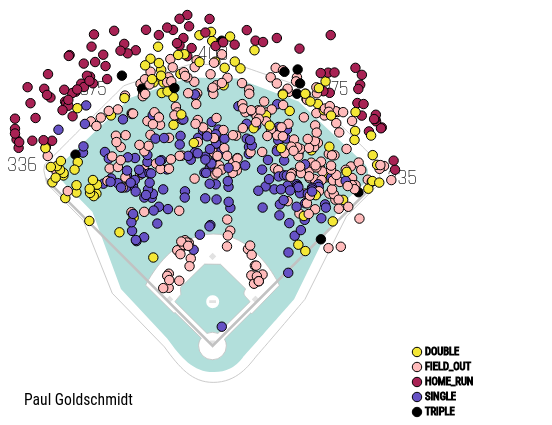 When trying to forecast what he will do in 2019, his new batting spot along with some interesting data from his expected statistics should factor in. During the past three years, Goldschmidt’s expected home run total of 103.3 surpasses his actual number of 93 and his expected average of .294 almost aligns perfectly with his .295 average. Why should this be noted? Goldschmidt’s never hit 40 home runs in a season. What if he keeps his ground ball rate at the 2018 level and his gains in hard hit percentage stick? 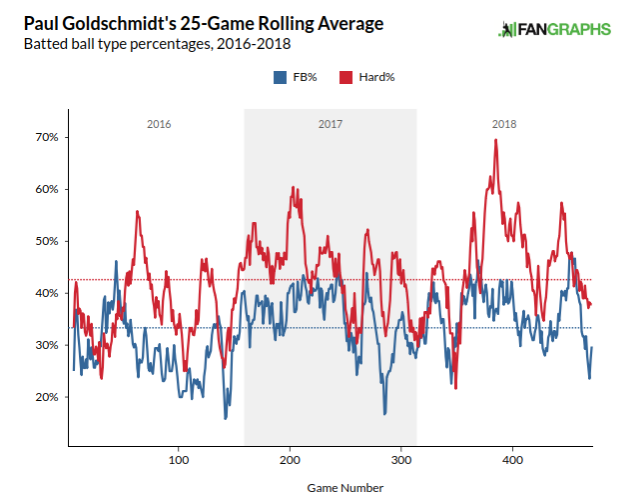 A collision of his hard hit spike with more fly balls could translate into more home runs. While Goldschmidt’s never relied upon home runs as a basis for his fantasy allure, there’s a chance for a one season spike in the category. Steamer only projected him for 91 runs, 27 home runs, 89 RBI, 11 stolen bases and a .277/.387/.499 slash prior to the trade. Going to go out on a limb, just kidding, but will take the over in all the categories except steals.

Of more concern for fantasy owners, how will the Cardinals handle their outfield? Presently, MLB Depth Charts slots in Jose Martinez for right field with Harrison Bader in center and Marcell Ozuna in left. This would push Tyler O’Neill back to the minors and Dexter Fowler to the bench as a late innings defensive replacement for Martinez. There could be another deal by St. Louis going forward.

A popular breakout candidate last year, Luke Weaver failed to live up to the hype. He finished with a 7 - 11 record in 136.1 innings with 121 strikeouts against 54 walks with a 4.95 ERA, 4.45 FIP and 1.50 WHIP. Not exactly what his owners hoped for. Weaver allowed almost seven percent more fly balls, his hard hit allowed rose to 36 percent and his strikeouts minus walks rate fell by over 10 percent.

Using Brooks Baseball’s data, here’s a look at Weaver’s pitches with his usage, batting average against, isolated power allowed and whiff per swing generated with each pitch the last two seasons: 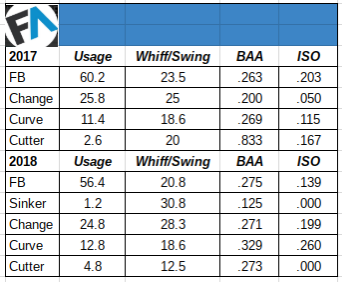 Not only did Weaver’s curve get hit hard, the regression of his change-up really hurt his overall statistics. Having a clear path to the rotation and a fresh start could reinvigorate Weaver. But he will need to regain the effectiveness of his change along with improving his curve. If he can work in the sinker more to induce more ground balls, it would be encouraging.

Since Weaver did not possess a starting slot in the Cardinals rotation prior to the trade, his Steamer projection does not really benefit this article. According to xSTATS, Weaver’s kwFIP in 2017 of 3.40 did not carry over and his number in 2018 of 4.45 sits in line with his FIP. Weaver could be worth a flier in the reserve rounds of 12-team drafts, but a strong spring could enhance his fantasy worth. Keep track if he’s trying to work on a pitch or if the sinker becomes more prevalent in his arsenal.

While the term sleeper gets thrown around too much in the fantasy community, Casey Kelly could be one for owners in two catcher leagues in 2019. Blocked by Yadier Molina and his struggles in limited samples with St. Louis, Kelly will head to Arizona with a chance to be the primary catcher in 2019.

Bear in mind, only 21 catchers made at least 350 plate appearances last year. Yes, Kelly could be the next James McCann and not produce or he could transition into a Tucker Barnhart type. Time will tell, but as a flier, Kelly could be a sneaky target at catcher in deeper formats and ones which use two catchers.

Across two levels last season, Andy Young hit 21 home runs with a .289/.379//.475 slash but only reached Double-A at the age of 24. He could become a utility player for the Diamondbacks and represents the third player in the trade. More seasoning could be required with him.

Like St. Louis, the Goldschmidt deal will also affect the roster in Arizona. Early reports speculate Jake Lamb and Christian Walker could platoon at first base with Eduardo Escobar taking over at third base. But, it seems like the Diamondbacks will continue to trade as the offseason progresses, so stay tuned as the roster takes shape.

Be sure to stay with Fantasy Alarm as the Hot Stove continues to churn to stay ahead of your competition.