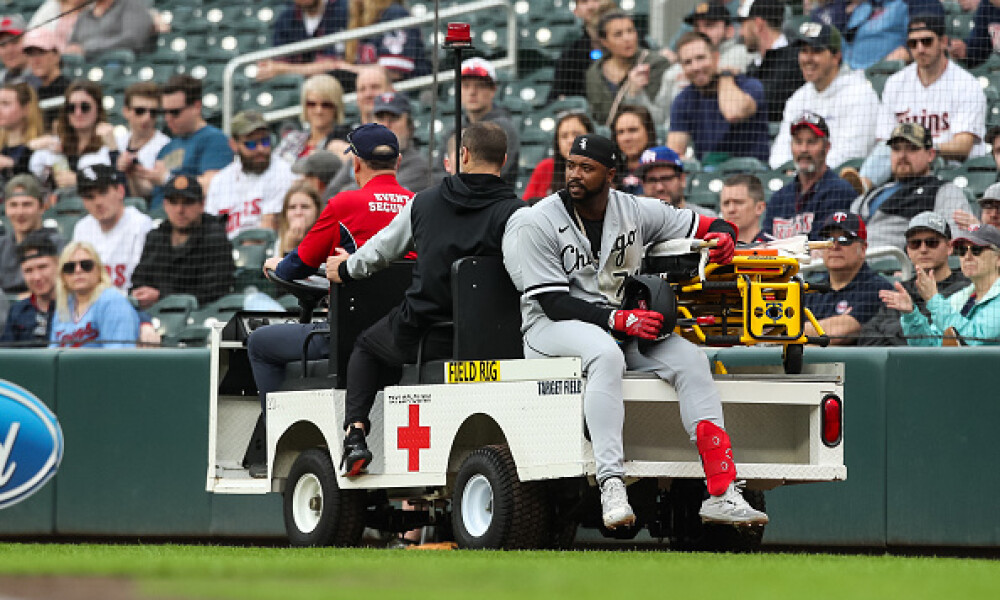 The injuries just keep on coming, and unfortunately for fans on the South side of Chicago, they have found the White Sox again. My injury report from Friday was led by Luis Robert, who appears to have avoided major injury, but you’ll find Chicago leads it off again on Monday and the news is much worse. The news right now is actually more good than bad in this latest injury report, so before you set your lineups for the week, take a look at who is hitting the injured list and who might be returning to their teams soon.

Eloy Jiménez – The injury problems for the young White Sox slugger continue. Eloy Jiménez will miss six to eight weeks with a pretty significant hamstring injury that required him to be carted off on Saturday. The good news is that he appears to have avoided a season-ending injury, but this is a tough blow to fantasy players with him on their roster. On the plus side, this should assure Andrew Vaughn every day playing time for a while and if he is on your waiver wire, I would look to make a move on him.

Ronald Acuna – We could be seeing the stud back in Atlanta before too long as he has five hits in 14 at-bats including three stolen bases on his minor league rehab assignment. Now, Ronald Acuna should be tearing up Triple-A pitching given his talent level, but it is great to see, especially the reports on his defense and base running as he returns from the torn ACL. You will probably have to be without him for this coming week, but if he returns by the weekend or next Monday I wouldn’t be surprised.

Gary Sánchez – The Twins catcher is being considered day-to-day after missing the weekend with abdominal tightness. I really don’t like these kinds of injuries, especially for catchers, but the team didn’t put him on the injured list, so it must be pretty mild. I would definitely consider moving Sanchez out of your starting lineup if you have weekly roster transactions, as there is a chance he doesn’t see the field until the middle of the week.

Javier Báez – The Tigers prize of the offseason, Baez returned from the 10-day injured list on Sunday and was back hitting third in the lineup. He didn’t have a hit, but you should feel comfortable putting him into your lineups going forward, even if you have weekly roster moves. The dynamic offensive threat should start to hit at any time.

Salvador Perez – Perez was hit on the hand on Saturday and there was some concern about him missing time or possibly even hitting the injured list, but Perez was back in the lineup on Sunday, although it was at designated hitter. We have our fingers crossed that there won’t be any lingering soreness, or a setback and he might just DH for a couple of days before getting back behind the plate. I would feel comfortable starting him this coming week even if you have weekly starting lineup moves.

Ramón Laureano – Athletics outfielder Ramón Laureano started on a rehab assignment as he begins to come back from an 80-game PED suspension. He had 27 games left on his suspension coming into the year, and the Athletics have played 17 games to this point. Do the math yourself on when he should be activated. Laureano is a nice speed/power combo as he had 24 home runs in 2019 with 13 steals and he had 14 home runs and 12 steals in 2021 before the suspension hit. Some worry about his production now that he isn’t on PEDs anymore, but if the guy is on your waiver wire, I think he is worth picking up.

Mike Clevinger – Injured Padres starter Mike Clevinger is going to make another rehab outing on Tuesday after he went three innings in his last trip to the mound. The team likely wants him to be able to go five innings before bringing him back to the big club, so we are probably looking at one more rehab start after this one on Tuesday. Look for Clevinger to rejoin the Pads rotation in the first week in May barring any setbacks.

Luke Voit – Another injured Padre, Luke Voit hit the injured list with biceps tendonitis. The good news is that the move was made retroactive to the 23rd, and that usually indicates that the team is trying to make his stay on the list as short as possible. Voit is eligible to return on May 3rd, and unless we see news between now and then I would expect him to return on that date.

Michael Conforto – The Scott Boras client who turned down a contract extension from the Mets and a qualifying offer is now going to miss all of 2022 due to a shoulder injury he suffered in the offseason. Conforto apparently fell awkwardly on his right shoulder during a workout in January and that is going to cost him the season and likely any hope at a decent contract. If you were stashing him hoping that some team would take a chance on him at some point this season, he is clearly droppable now.

James Kaprielian – He is far from a stud, but James Kaprielian certainly is a guy worthy of being on your fantasy roster. He looks to make one more rehab assignment this Tuesday and could return to Oakland after that. Kaprielian threw 78 pitches in 4.2 innings his last time out (although allowed four runs), so expect to see him throw 85-90 on Tuesday and then he will likely rejoin the big club. He isn’t going to win you any league, but he’s a decent innings eater who had a 4.07 ERA and just over a strikeout per inning pitched in 2021.