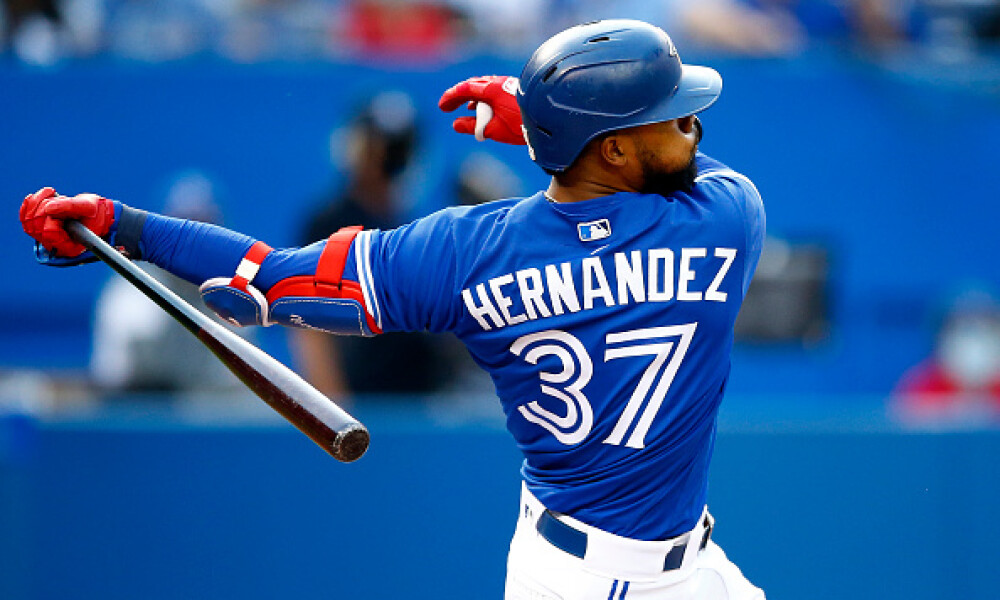 We are still in the first ten days of the Major League Baseball season and thankfully the injury news hasn’t been too bad yet. In fact, we have a fair amount of good news surrounding injured players on their way back with only a few notable names hitting the shelf recently. In this MLB injury report, we'll have the latest on the players headed to the Injured List over the past week. Be sure to check the whole report before setting your fantasy baseball lineups for the upcoming weekend.

The Blue Jays slugger was off to a pretty decent start but now hits the 10-day Injured List with an oblique strain. Toronto hasn’t put a timetable on Teoscar Hernández's injury, but obliques are always so tough. Hitters torque their body to swing, and these muscles are difficult to know when they are healed. Hernandez must still be stashed on your roster in the hopes that this doesn’t keep him off the field long.

The Cincinnati Reds second baseman left the game Thursday with hamstring tightness, and it didn’t look great. Jonathan India isn’t going to play on Friday, but early reports seem to be encouraging. There’s a chance he avoids the Injured List or, even if he goes on it, this will be a shorter-term injury. The information can still change as the days pass, but it seems like you could have your keystone back in fantasy lineups this weekend.

Ronald Acuña Jr.'s recovery from the torn ACL last season is nearly complete. The best news possible recently came out that he could go on a rehab assignment early next week. Hitters don’t generally need as long of a rehab stint, so a predicted return for the end of April looks to be dead on – or perhaps he could come back even sooner.

The Chicago White Sox slugger fouled a ball off his ankle on Wednesday and didn’t play on Thursday. The good news is that x-rays were negative, though, and Eloy Jiménez is expected to be back in the lineup in a day or two. I actually wouldn’t be shocked to see him play on Friday. A big crisis appears to be avoided and you shouldn’t have to worry about replacing him for any length of time.

Alex Kirilloff and his top-end potential continue to have injury issues after he was recently placed on the 10-day Injured List with right wrist pain. The big concern here is that this is the same wrist that Kirilloff had issues with last year that led to season-ending surgery halfway through the year. He had just one hit in his 17 at-bats this season, so you might have to dump him if your roster is short. Try to stash Kirilloff, if possible, and maybe he can have an impact later in the season. Trevor Larnach will take his place in the order, though he doesn’t have a lot of fantasy value in the interim.

Tommy Pham was involved in an outfield collision with teammate Nick Senzel on Tuesday and has not played since. He had an x-ray, which came back negative, and the Reds have not put their newest outfielder on the injured list yet. All of this is good news and Pham should be back in the next day or so. If you picked him up when he landed in Cincinnati, try to stick with him a little longer before pulling the plug.

I wouldn’t call this injury-related, but it does have to do with him getting back on the mound. MLB and the MLBPA have extended Trevor Bauer’s administrative leave through April 22nd. The leave was due to expire on Saturday, but now it'll be at least another week as the league continues its investigation into Bauer violating the domestic violence and abuse policy. Some feel that it is just a matter of time before the leave is ended, while others feel like the league is not in any rush to let him pitch again. We will stick to the facts here and just say it is at least another week before Bauer might be eligible to return.

James Kaprielian isn’t a very popular name, but he is a guy that I really like and have stashed on a bunch of my rosters. Kaprielian is set to start a rehab assignment on Friday and should be back with the A’s in a week or two at the latest. He might not pitch on the best team, but Kaprielian had 123 strikeouts in 119 innings last season. That is a pretty solid strikeout rate for a guy who is probably available on your waiver wire and had an ERA just over 4.00 last season. If you are in need of a starter in the coming week or so, keep him on your radar.

After participating in a couple of bullpen sessions, Luis Castillo is now progressing to live batters on Friday. If that goes well, we could be looking at a rehab assignment for Castillo in the next week to ten days. A return to Cincinnati's rotation in late April or early May is looking very viable.

The Orioles' ace had an MRI on Thursday and, although we haven’t gotten the results back yet, this is very concerning. John Means said he felt something in his forearm when throwing his curveball. Forearm injuries tend to last a long time, and this could be disastrous news for Means. Hopefully, it is something that doesn’t cost him much time. Be prepared to have to replace him on your fantasy roster for the upcoming week and perhaps longer.

A guy that I liked to have a breakout year, Luis Patiño went from the 10-day to the 60-day injured list this week after suffering a severe left oblique strain. I already said how this injury was tough for hitters, but it is equally tough on pitchers who contort their bodies on every throw. Patino is out for at least two weeks, but I would be surprised if it wasn’t longer than that. Unless you have several injured list spots on your roster, you will probably have to let him go.

The Mets' woes continue as Taijuan Walker is headed to the IL with right shoulder bursitis after not being able to finish his first start of the season. He has had an MRI, though the results of that have not been made public yet. The vibe around this injury so far isn’t that it is anything that should be too long-term – so stash Walker if you can for his return.