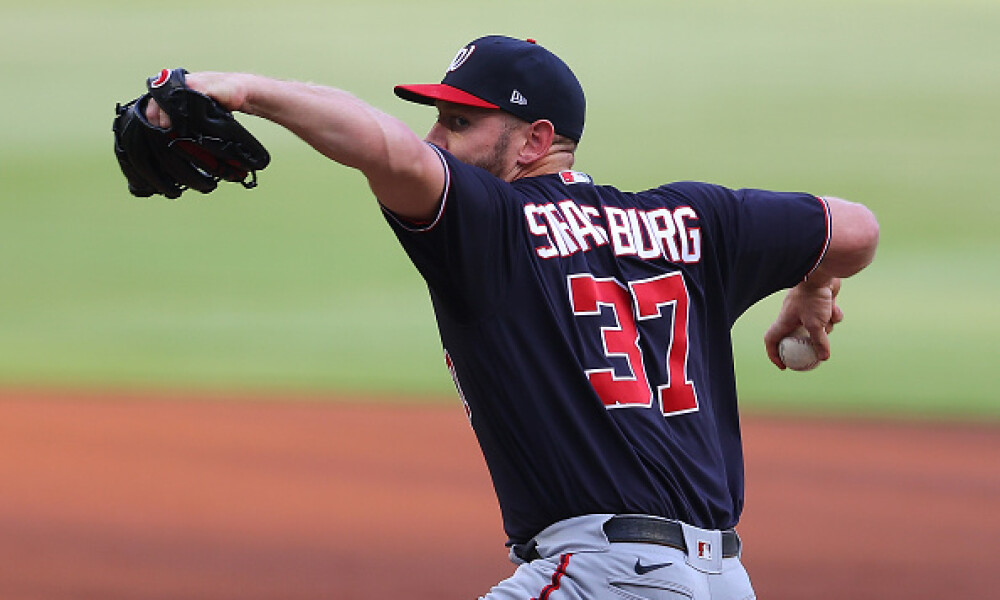 We are at the start of another week of the 2022 fantasy baseball season, and you should continue to have a good grip on your rosters. However, even if it looks like you are cruising towards a league title, MLB injuries can derail the best fantasy baseball lineups. In this latest installment of the 2022 MLB injury report, we have several big-name starting pitchers on the road back to rejoin their teams. Stephen Strasburg of the Washington Nationals, Shane Baz of the Tampa Bay Rays, and Clayton Kershaw of the Los Angeles Dodgers are a few of those MLB pitchers close to returning from the Injured List. We also have some hitters that are either just returning or newly hurt as the latest MLB injury report includes new names. If you need replacements on your fantasy baseball lineups, be sure to check out Ray Kuhn’s latest fantasy baseball waiver wire article. If you are looking for a pitcher to stream or a two-start pitcher this week, Ivar Anderson has you covered there as well. Don't forget to also check out the updated June fantasy baseball rankings or the MLB prospect reports from Matt Selz to get a leg up on the competition. Let's now take a look at the latest MLB injury report to help you set those fantasy baseball lineups.

Stephen Strasburg was great in his rehab assignment on Friday as he threw six shutout innings. Now the Washington right-hander is going to throw a bullpen session on Monday. I still feel like he will have to make one more rehab start, but he could be activated after the bullpen. Either way, I would keep Strasburg out of my lineups this week. It is possible that he will be back in fantasy baseball lineups next week, though.

More good news on Clayton Kershaw as he is getting very close to returning. In his last rehab start, he allowed one run over four innings and struck out seven with his 59 pitches – albeit against Single-A competition. Barring any setbacks, which none were reported as of Monday morning, Kershaw’s next time taking the mound should be with the Dodgers. Although he might be on a pitch count, that would likely be at the end of this week.

We’ve been following Shane Baz's rehab since he was just playing catch. Now the Rays' right-hander is very close to being ready to return to the Tampa Bay rotation. He struck out ten in just 4.1 innings in his latest start for Triple-A Durham. Baz also walked just one and allowed four hits in the outing. At this point, his next start really could be for Tampa and the time is now if he happens to still be around on your waiver wire. This kid could be really good after he showed flashes last season.

The Yankees' other slugger was activated from the Injured List on Saturday but then didn’t play in the game on Sunday. Is this something you should be concerned about? I say absolutely not. We know the Yankees like to be cautious with Giancarlo Stanton and they are absolutely crushing it in the standings right now. This was surely just a routine day off and I would not worry about any type of re-injury to his calf.

Any news with the Mets' stud is going to be something worth reporting. It isn’t much, but Jacob deGrom had his first bullpen session in three months on Saturday. He threw 19 pitches, all of which were fastballs. The righty will progress to live batters next but is still seemingly a few steps away from a minor-league rehab assignment. I would expect deGrom to be out for at least another month.

Jack Flaherty hasn’t pitched all year, but the Cardinals' starter made his first minor league rehab start on Sunday and was dazzling. He had three perfect innings for Double-A and threw strikes on 21 of his 30 pitches in the game. Like Andrew Heaney, he will surely need two or three more rehab starts before he is ready to return, but he could be back by the middle of the month.

Boston’s ace is set to throw his latest bullpen session on Tuesday as he is slowly working his way back from a rib injury. After that, Chris Sale is scheduled to face live hitters on Friday. He could do that a couple of times, or he could progress to a minor league rehab assignment. Sale is making progress, but he is due to be out for at least another month.

Taylor Ward has hit the 10-day Injured List with a right hamstring injury that he suffered on Friday. The Angels outfielder was already dealing with neck and shoulder issues, so the team will sit him down for a couple of weeks. Hamstring injuries can be tricky but, given the way he has played so far, you absolutely have to stash Ward if you are able. The team brought up former top prospect Jo Adell, but I don’t know that he helps your team at this time.

Mike Clevinger returned without a stint in the minors, so it wasn’t a surprise to see him last just three innings in his return for San Diego. The good news is he threw 60 pitches and was fine after the game. He also allowed just one run in his three frames against the Brewers on Sunday. Clevinger will likely be on a pitch count again for his next time out against Colorado. That might be a good enough matchup to give him the start in your fantasy baseball lineups, even if you know he won’t go as deep into the game as normal.

The Rays' closer (I guess) was activated on Sunday from the Injured List after being out two weeks with a back injury. In the ninth inning, Andrew Kittredge did come into the game – though the Rays were losing – and didn't allow a hit in his one inning pitched. Tampa Bay isn’t exactly known as the most reliable team as far as naming one closer, but Kittredge had five saves on the season before getting hurt. He'll be the best bet going forward for saves in the Rays' bullpen.

The Mets have some good news on the injury front, for once, with Tylor Megill getting closer to returning. The budding star threw 53 pitches in Sunday's rehab start and struck out five over 3.2 innings. Megill's velocity was great, and he is closer to a return. Look for him to have at least one more rehab start before he can rejoin the Mets' rotation. Get ready to activate him in about ten days or so.

Andrew Heaney made his first rehab start on Saturday and reported no setbacks. The Dodgers pitcher did allow two runs in three innings, but the good news is that he came out of it healthy. He will surely need another two or three rehab starts before he is ready to return to the Los Angeles rotation. While he pitched well in his two major league starts before getting hurt, Heaney isn’t going to win you any league title.

The Tigers are now getting some good news on the pitching front. Eduardo Rodriguez should begin his minor league assignment at some point this week with Detroit's Triple-A affiliate. E-Rod has been out a couple of weeks with a rib cage injury and shouldn’t need more than two rehab starts, at the very most. He wasn’t pitching great this year, but he has the ability to be a serviceable fantasy pitcher.

The Tigers' struggling outfielder is set to begin his minor league rehab games on Tuesday. Robbie Grossman will likely play three or four games before coming back to Detroit as he returns from a neck strain. The Tigers (and fantasy players) are hoping that this short time off was what he needed to get his season on track.

Staying with the Tigers, manager A.J. Hinch said that Austin Meadows could return as early as Tuesday from his bout with vertigo. He smacked a home run on Saturday in his rehab game and has not had any more dizziness since hitting the Injured List. He isn’t an elite option, but in leagues with more than three outfielders required, Meadows is certainly someone who would be starting for you.

Luis Urías hasn’t played since Friday as he continues to nurse a thumb injury, but it doesn’t seem like this is going to be something that causes him to hit the Injured List. Urias had been trying to play through the injury, but he was having difficulty throwing the baseball. There is optimism that the Brewers shortstop will be able to return on Tuesday. However, if I was a fantasy player in leagues with a weekly roster setting, I would try to leave Urias on my bench.