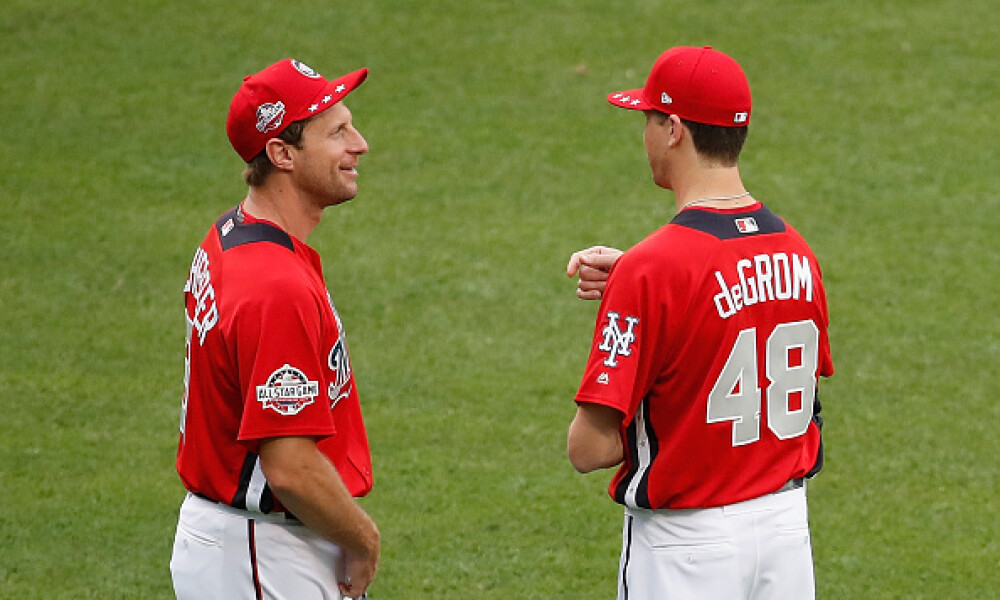 We are winding down the month of June and the MLB injury report is growing by the day. I hate to say that this is one of the longest reports of the year, and there are a lot of big names on it. Of course, it isn’t always bad news as some studs are returning or close to returning to your fantasy baseball lineups. If I am about to give you bad news, be sure to check out Ray Kuhn’s fantasy baseball waiver article here or Ivar Anderson’s two-start or streaming pitcher article here to help you fill the void of missing players. The All-Star Break is in sight, so let’s see who is on the fantasy baseball injury report now and how long they might be out.

Jacob deGrom – It isn’t a lot of news, but deGrom threw 20 pitches in a batting practice session on Saturday and it appears that he came out of it with no setbacks. The team has said he will do these one or two more times before going on a minor league rehab assignment. It would be a major boost to fantasy pitching rotations to get deGrom back, and maybe we are within three weeks of that happening.

Max Scherzer – deGrom’s teammate is much closer to a return. There was a thought he might be back last week, but now Scherzer is going to make one more rehab assignment on Tuesday and if all goes well could return to the Mets rotation after that. He was having a great season and fantasy teams can’t wait to activate this stud.

Chris Sale – It was at a rookie level affiliate, but Sale threw 2.2 innings in a rehab assignment with six strikeouts, allowing three hits and no runs. He threw 36 pitches in the game. You have to figure that he will throw two or three more rehab starts before returning for the Red Sox, but there’s a chance we might see him on the mound before the All-Star Break.

Bryce Harper – He has been battling through an elbow injury all season long, and you’d have to say he’s been doing that successfully as Harper has had a great season. However, that came crashing to a halt when he was hit by a pitch on Saturday that resulted in a fractured thumb. We will await a timetable on his return, but Harper obviously isn’t going to be able to play through this. I would expect this to cost him a month or more and be a massive blow to fantasy rosters.

Ronald Acuña Jr. – Man he has been in this article far too much this season! This time, Acuna fouled a ball off his foot on Saturday and remained out of the lineup on Sunday. There was also a report that he was on a scooter because he couldn’t put a lot of pressure down on his injured foot. Acuna said that he hoped to be back in a couple of days, but like I say every week, the player always thinks they can come back sooner than they can. I won’t be shocked at all if he ends up on the injured list and you should definitely get him out of your lineups for now.

Jonathan India – A rough year for the Reds keystone got even rougher on Saturday as he was hit on the hand with a pitch against the Giants. Luckily though, the x-rays came back negative, but I won’t be surprised if he misses a little time. Early indications are that he could avoid the injured list, but if you have another option, you should put Indian on the pine until we hear some good news about him.

Manny Machado – The Padres superstar third baseman still has not been in the lineup since suffering that ankle injury last week. Sunday marks the seventh straight game that he missed, and it has to make you wonder why he wasn’t placed on the injured list, and if he might end up there after all if he isn’t healing as fast as the team hoped. It could be made retroactive to the last day he played, but I am starting to think that Machado might end up on the shelf a little longer than was originally stated.

Wander Franco – After missing the entire month of June with a calf strain, Franco returned to the Rays lineup on Sunday, and should be back in yours as soon as possible. He had a solid rehab assignment, and there’s no reason he won’t get back on track in the Majors. He has just four home runs and four steals through 45 games but look for Franco to improve as the season goes on.

Kris Bryant – The Rockies hot corner will get its main man back on Monday as Bryant will be activated from the injured list. He’s been limited to 17 games so far this season because of injury and still hasn’t hit his first home run of the year. He only made it two games the last time he was activated before ending up back on the injured list, so let’s hope that this time it is longer than that before I have to include him in this article again.

Brandon Woodruff – Milwaukee will get some good news about their rotation when one of their aces returns. Woodruff is set to start on Tuesday against the Rays after missing time with an ankle injury and numbness in his fingers. He had no issues on his rehab assignment and will be ready to go. Despite his inflated ERA in the beginning of the year and the tough matchup against Tampa in his return, he absolutely belongs in your lineup for this start.

Yoán Moncada – The disappointing White Sox hot corner man is set to return from the injured list on Tuesday. Moncada is going to miss the minimum amount of time from the hamstring injury, now we will just see if he can get himself going at the plate again as he is off to a dreadful beginning. Given his history though, you have to get him in your lineups unless somehow you drafted two great third basemen.

Jeremy Peña – The Astros welcomed their exciting rookie shortstop back to the lineup on Sunday after he missed two weeks with a left thumb injury. He came back with a hit in four trips to the plate and if you have him on your roster it is time to get him back in the lineup. He has been a great find from early in the year with a solid batting average, nine home runs and six steals as a guy who can really help you across the board.

Jack Flaherty – I swear this guy lives in this article. In just his third start back from the injured list, Flaherty was lifted from Sunday’s game with shoulder stiffness that Cardinals manager Oli Marmol later deemed to be more of a dead arm than pain. No matter the injury, this is not good news for a guy who has really had trouble staying healthy the past few years. The only good news is that Flaherty was pitching well before being removed. I am going to assume that he is headed back to the injured list, and hopefully we get more of a clarification of what exactly is wrong and when we can expect him back soon.

Brandon Crawford – The Giants placed their shortstop on the injured list on Sunday after he had missed some time with inflammation in his left knee. He did play on Friday but then missed both weekend games and now will miss at least the ten days. The team did not offer a timetable for his return, but the fact that he played Friday after missing a couple of games makes me feel like this is a short-term absence and he should be back in no more than two weeks.

Eddie Rosario – The Braves outfielder started his minor league rehab assignment over the weekend as he is recovering from eye surgery. Rosario was having blurred vision, which hopefully was attributing to the dreadful start that he got off to. I wouldn’t imagine that he would need more than three or four days so we could see him back in the Braves lineup by next weekend.

Jeff McNeil – He isn’t going to give you much pop or steal, but the Mets infielder/outfielder is hitting for one of the best averages in the league this season. He has been out since Monday with a hamstring injury, but now Buck Showalter has said that he is confident that McNeil will return Tuesday after the Mets off day on Monday. Batting average is hard to come by in fantasy baseball, and McNeil has been a consistent source of that. Even if you only have weekly roster moves, I would feel comfortable having him in my lineup this coming week.

Hunter Renfroe – He had really heated up in the past two weeks or so, but Renfroe will now hit the 10-day injured list with a calf injury. The move was made retroactive to June 23rd, so it feels like the team is trying to make his stay on the shelf as short as possible. Renfroe is having a pretty typical season for him so hopefully you can get him back in your lineups by next week.