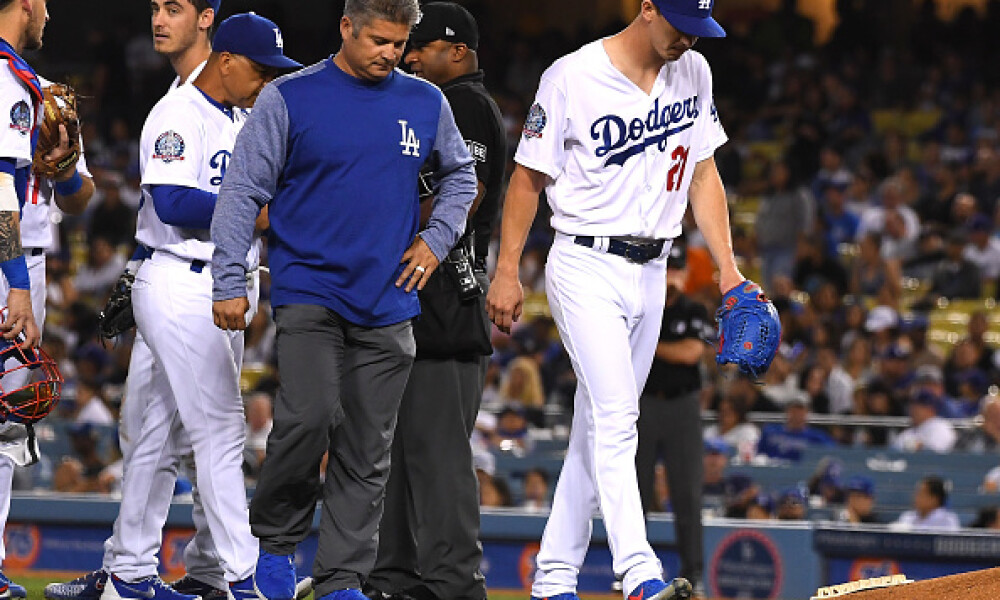 Walker Buehler – The starting pitching landscape was rocked this weekend with the news of Buehler’s injury. An MRI revealed a flexor strain, and he won’t even be able to throw for another 6-8 weeks, and the worry is that his season might be over. Good luck on the waiver wire trying to find a player that is remotely as effective as Buehler. This one hurts for those with him on their rosters.

Michael Kopech – The young hurler for the White Sox was removed from his start on Sunday after 12 pitches with right knee pain. He has had a great start to the season, but this is certainly going to keep him out for a little while. We are still waiting for a timetable for how long he might be out after the MRI came back clean, but it doesn’t seem as of now that this is an overly serious injury. Kopech might hit the injured list, but I’d be surprised at this point if he missed more than 10-15 days.

Wander Franco – The young shortstop is going to do some agility drills on Monday as he is attempting to come back from a quad injury he suffered at the end of May. He is clearly a player that Tampa Bay is going to be very cautious with, and hopefully we get good news after he does this field work, and he can get back to the rest of baseball activities. He will likely go on a short rehab assignment when he gets the green light and hopefully sometime next week he can get back to the Majors.

Seiya Suzuki – The Cubs outfielder is struggling to return from his finger injury and will now be shut down from baseball activities for at least the next five days. Needless to say, this isn’t good news. The team is waiting for swelling to subside and then see where to take it from there. The fact that his recovery is taking this much time is certainly concerning and just because he is shut down for five days doesn’t mean that is when he will return. I would say fantasy players with Suzuki on their roster are going to be without him for a minimum of two more weeks and this could possibly sneak towards the All-Star Break.

Yasmani Grandal – The White Sox backstop was forced to miss Saturday’s game with what seemed to be a hamstring injury. He also didn’t play Sunday, and while it is a good sign that the team didn’t immediately put him on the injured list, the injury didn’t look great when he left the game. I am also concerned about a leg injury with a catcher. There is always the DH option for Grandal so he could avoid a ten-day break, but right now I wouldn’t be the least bit surprised to see him hit the injured list. Gabriel Moreano or Brian Serven might be able to help you if he does.

Corey Knebel – The Phillies closer felt shoulder tightness on Saturday while warming up to come into the game and that is never a good sign. We are still waiting for an update, but a shoulder injury for a pitcher is never a good thing. It is a bit encouraging that the team hasn’t already made an announcement and put him on the injured list, but I am still skeptical. Brad Hand would be the best bet to handle the ninth inning if Knebel hit the injured list.

Jack Flaherty – The Cardinals hurler was great again in his second rehab start on Friday as he allowed just one run and struck out six in his latest rehab start. He is set to make his final rehab start on Tuesday and assuming he come out of that with no setbacks he should be able to rejoin the Cardinals rotation by the weekend or at worst the following Monday or Tuesday. When on the mound, Flaherty can dominate and you should start making plans now on how to manage your roster to get him off of your injured list.

Lance Lynn – He was horrible in his last rehab start, but Lynn will toe the rubber for the Pale Hose on Monday as he returns from the injured list to face the Tigers. He gave up seven runs in three innings his last time out, but let’s face it all we care about is that he came out of it healthy. It will be his much-awaited season debut and you should activate him if possible for this start as he looks to replicate last season’s success.

Nathan Eovaldi – His next start had been pushed from Tuesday to Thursday, but now the Red Sox have put Eovaldi on the 15-day injured list with back inflammation. There hasn’t been any red flags that this is going to be a long-term injury and the feeling now that Eovaldi will be back in the two weeks. The team even made the move retroactive to June 9th which is the day after the last time he started. It should be the minimum stay on the injured list for the Red Sox hurler.

Matt Chapman – Blue Jays third baseman missed two games over the weekend with wrist soreness and although the team hasn’t put him on the injured list yet, I feel like this is something that is going to linger for a bit. A wrist injury for a power hitter is not a good thing and hopefully this isn’t something that impacts him a while. If you have weekly roster moves I would likely leave Chapman on your bench this week.

Luis Urías – A season of injuries continues for the Brewers shortstop as he didn’t finish Sunday’s game with a hamstring injury. He started the year on the injured list, had a thumb injury later, and now this. The Brewers have not made any declaration of if he will miss any time or a potential trip to the injured list, but you should probably be prepared to not have him in your lineup for at least the next few days if not more.

Tim Anderson – The White Sox shortstop is set to begin his minor league rehab assignment on Tuesday as he starts his return from a groin injury that he suffered on May 30th. He should need two to three games you would think before he is ready to get back to Chicago so if you have weekly roster moves you’ll probably go one more week without him, but if you have daily moves you should plan nor for who you are going to drop to get him back into your starting lineups when he is eligible.

Taylor Ward – The Angels outfielder was off to an amazing start before a hamstring injury paused his trip to fantasy stardom, but he is going to be activated off of the injured list on Tuesday in time to face the Dodgers. Ward has incredibly impressive numbers and was playing over his head and hopefully this time off doesn’t take away from what he was doing.

Zack Greinke – Working his way back from a forearm injury, Greinke was fantastic in his first rehab start, allowing no runs over five innings and struck out four. He only allowed one hit in the outing. He is a long way from the pitcher he used to be, and he currently is sporting an ERA over 5.00 and pitches for a subpar team. However, he is still worth of a roster spot even if you only start him against bad teams. He will surely have another rehab start or two before he will rejoin the Royals.