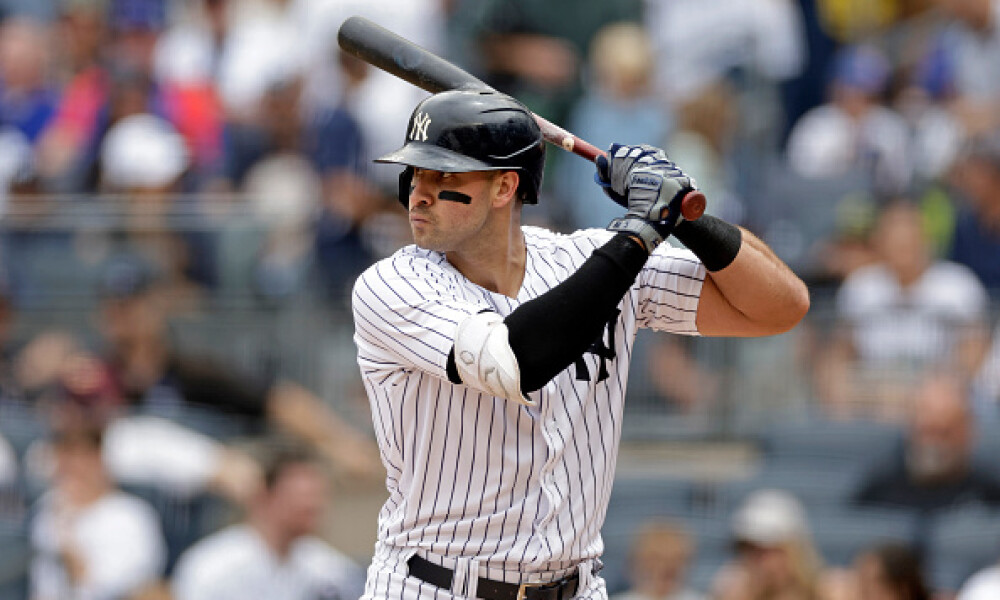 Have you caught your breath yet following a fast and furious 2022 MLB Trade Deadline? I know I haven't and it will take a few days for the dust to settle across the league as the flurry of MLB trades will impact our own fantasy baseball lineups plenty. Brand new roles and opportunities have been created across the league, which gives us some interesting names to sort through as they move up the fantasy baseball rankings and rest-of-season MLB projections. Joey Gallo is one name to watch as he moves from the New York Yankees to Los Angeles Dodgers. Be sure to check out our MLB Trade Deadline Tracker for in-depth breakdowns of every move from earlier this week. Many of the MLB trades will determine which players to target as fantasy baseball waiver wire pickups. Check out which players are trending up and down in the latest fantasy baseball stock watch. Plus, keep an eye on the MLB top prospects that switched teams and could eventually emerge as fantasy baseball sleepers. Let’s now jump right into some of the best MLB fantasy baseball waiver wire targets for this week.

It is no secret that what we are after here is Mateo’s stolen bases, but his .145 batting average in June made things quite challenging. In fairness to Mateo, he has been consistent in the stolen base department this season with seven, six, six, and five stolen bases in the first four months of the season. From the batting average perspective, the Baltimore Orioles youngster has turned things around with a .250 BA – and did we mention he has 25 stolen bases. As a nice bonus, Mateo does have 10 home runs so far this season, which helps to make up for the hit we take to our batting average by rostering him.

Call this an extreme lottery ticket, call me crazy and delusional, and call this a waste of FAAB, but I am going to take a shot here. All of those sentiments are quite reasonable, but that is not going to stop me. It is quite difficult to forget about the 38 home runs that Gallo hit last season, along with the two years in which he hit the 40 home run mark. The power and run production is real here and the change of scenery could stand to benefit Gallo. The pressure will be off now that he's away from New York and there are few lineups better than the Dodgers.

Grisham is another player I was on in MLB DFS lineups this week, so it makes sense to target him from a seasonal perspective as well. At this point, it's not a secret that San Diego created a tidal wave-sized splash at the trade deadline with the Juan Soto/Josh Bell trade. Then with Fernando Tatis Jr.’s impending return, the Padres’ lineup is going to be quite dangerous. That takes a good amount of pressure off Grisham, who was relatively highly regarded entering the season but has struggled to this point. Over the last seven days, Grisham is hitting .320 with three home runs and six RBI. Grisham is working to break the Mendoza line – he is at .199 batting average – but he should get over the hump soon with his .234 BABIP. With 13 home runs through 103 games, Grisham is in line to break his career high of 15 homers, and I expect to see his runs scored and RBI increase as well.

With a .250 batting average to this point, Frazier is not quite following the All-Star pace he was on last season. Plus, his 44 runs scored are trailing the 83 he picked up last season. However, he appears to be past a June that saw him hit just .144. After hitting .314 in July, Frazier has continued his success into August with a .455 average over the first three days of the month. Frazier will continue to receive regular playing time in a solid Seattle Mariners lineup and with seven stolen bases to this point, he could potentially chip in a few of those as well.

Newman is another player I liked from a MLB DFS perspective this week as he is working his way back into form after missing a substantial amount of time this season. The Pittsburgh Pirates middle infielder provides some positional versatility and he is hitting .385 with two stolen bases over the last seven days. Through 34 games this season, Newman is hitting a solid .279 with 12 runs scored and 14 RBI while also stealing four bases. As we deal with injuries, look to solidify batting average, and pick up any possible stolen base, there is some potential value in Newman.

Things, at least in a small sample, were going well for Luzardo before he ended up on the Injured List. A forearm strain caused the Miami Marlins pitcher to miss more than two months of action. The left-hander returned to action on Tuesday, though, and it was like he never left. Luzardo tossed five innings of two-run ball with five strikeouts and allowing just three hits. Walks will continue to be a problem – 4.24 per nine innings this season – but Luzardo does a pretty good job getting out of trouble with 12.18 strikeouts per nine. In 34 innings this season, he has a 3.97 ERA (3.41 xERA) with opposing hitters barreling up just seven balls in 76 opportunities so far this year.

It has been an up-and-down rookie year for Detmers, but things have seemingly turned the corner for him with a 1.13 ERA in 24 July innings. Detmers struck out 31 batters while not allowing a home run in this past month, and both are developments worthy of our attention. Opposing hitters had an average of just .165 against the Los Angeles Angels rookie in July and he is coming off a start against Texas in which he struck out 12 batters in seven innings of work. For the season, Detmers' ERA is down to 3.62 and he also has a WHIP of just 1.05.

Of the three relievers that moved into new roles this week, Bautista is the most attractive and also the costliest option who was likely already rostered in a decent number of leagues. The right-hander did pitch in the ninth inning for Baltimore on Wednesday in what ultimately was a non-save situation after the Orioles tacked on some runs. I would not hold it against him that he allowed a home run. Bautista also struck out three batters to give him 57 in 43.2 innings this year. It has been a successful season for him to this point with a 1.81 ERA (3.12 FIP) to go along with a WHIP under 1.00. With three saves so far in 2022, the role is not completely unknown to Bautista – which helps as well. Bautista should get plenty more save opportunities for the Orioles now that Jorge López is gone.

After the trade of Rasiel Iglesias to Atlanta, Los Angeles gave Quijada first crack at the save opportunity and the right-hander came through on Tuesday. It was the second save of the season for Quijada, and that promptly puts him on our radar. Through 20 innings this season, he has had success with a 3.15 ERA (2.10 xERA) – but we do have to keep an eye on his 5.4 walks per nine innings. Variability comes with the role and it is something we have to deal with in the quest for saves. Right now, it appears that Quijada is going to get a look there for the Angels. The good news is that he had 24 strikeouts in 20 innings entering action on Wednesday, so he can work out of trouble and presents some value aside from saves.

We have been down this road before with Wick, but the right-hander is back handling the ninth inning after the Cubs moved David Robertson, Mychal Givens, and Scott Effress at the trade deadline. Wick has handled the closer role at times in the past on a temporary basis and, with four saves so far this year, he is one away from tying his career high. With a 4.36 ERA and 1.73 WHIP, there is more risk than we might like in play here. Still, Wick’s 3.74 FIP gives us some optimism and he strikes out a batter an inning which does help.