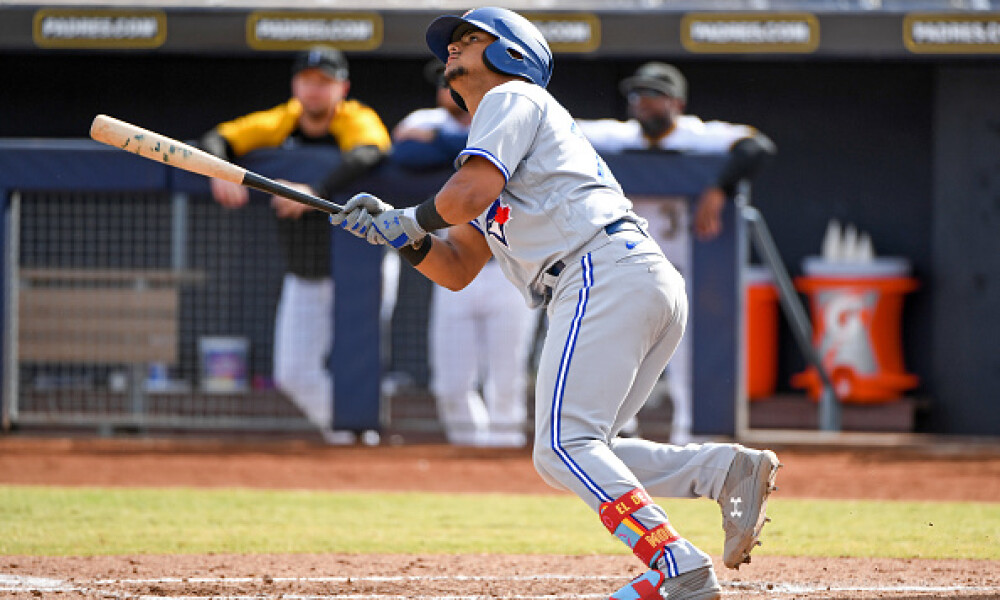 Let’s dig into who has moved up the fantasy baseball rankings with recent success in the hopes that it can be sustainable moving forward. Here are some hot hands that I am targeting this week via the MLB waiver wire.

Toronto isn’t promoting Gabriel Moreno this weekend not to play, and with the injury to Danny Jansen, playing time shouldn’t be a problem for him. Moreno joins a fully functioning lineup in which he won’t be relied on as a main contributor, and that should help with the adjustment process. So far in Triple-A this year, Moreno is hitting .324 with 23 RBI and 18 runs scored, and while there isn’t a ton of power, it’s hard to argue with the plate skills.

This isn’t the first time we target Bryson Stott, and the hope is that the rookie’s second engagement with the Phillies goes better than the first. Thanks to injuries in in Philadelphia’s infield, the opportunity is there, and it’s also too early to write Stott off just yet. After firing Joe Girardi, the only place for the Phillies to go from here is up and Stott is hitting .263 with two home runs, six RBI, seven runs scored and a stolen base in the last seven days. There truly is nothing left for Stott to prove in Triple-A so it’s really just a matter of getting past the adjustment period and putting it together.

Each week we are going to be on a continuous hunt for stolen bases, and the latest installment brings us to Jon Berti. With the injury to Joey Wendle and Miami looking for a spark overall, we haven’t had to worry about playing time for Berti and as long as he produces, it won’t be a concern moving forward. Over the last seven days, Berti has four stolen bases while batting .320, and that is exactly what we are looking for. With just 97 plate appearances, the versatile utility player already has nine steals on the season while batting .272 and we have seen some success in spurts from him in the past.

After a strong finish to the 2021 season, Lane Thomas generated some buzz entering 2022 but as you can probably figure out by now, it hasn’t gone according to plan. Over the past week though, Thomas has picked up the pace with hits in four of his last five games (all while batting second). In each of those games, Thomas had multiple hits while scoring a run, and in one, he went deep three times. Thomas is still only hitting .226 for the season, and batting average was a concern last year too, but there are some solid Statcast metrics here too. In the second half last season, Thomas hit .270 in 44 games with 27 RBI, seven home runs, and 33 runs scored so there is some precedent.

One of the biggest things for Nick Senzel throughout his career has been his health, but if he is able to take the field, playing time won’t be an issue for him. Of course, he didn’t play on Wednesday with a lower back strain, but for now it doesn’t appear to be anything serious. Despite hitting just .228 on the season, Senzel has picked things up over the last seven games batting .333 in that stretch. We are in the post-hype stretch of things with Senzel, but there is still time for him to figure things out.

Ross Stripling finds himself back in Toronto’s rotation, and he got off to a good start on Monday with five scoreless innings against Kansas City to pick up the victory. The right-hander doesn’t have to worry about run support pitching for the Blue Jays, and things stay favorable for him as he faces Detroit in his next start. In 14 games, six starts, Stripling has a 3.65 ERA (3.30 xERA) while striking out 7.54 batters per nine innings and walking just 1.95. With a 53% groundball rate, Stripling does a good job of keeping the ball on the ground and a 6.9-degree launch angle against also helps.

Josiah Gray has the pedigree so it’s just a matter of him putting together, and in his last three starts, things have gone well. In his last three starts, Gray has picked up two victories with 18 strikeouts in 16 innings along with just a 1.13 ERA and a 1.19 WHIP. Gray has been all over the place this year and has brought his ERA down to 4.33 but a 4.98 xERA does tell us to proceed with some caution as he is walking over four batters per nine innings while striking out about 10. Home runs are going to be the main concern here as Gray allows two per nine innings and opponents have a 24-degree launch angle against.

Let’s stick with some younger starting pitchers, and Mitch White is coming off five scoreless innings against the White Sox. The good thing about the Dodgers is that we never have to worry about run support or the bullpen and both are working in White’s favor. Through 25.2 innings this season, White has a 3.86 ERA while striking out more than a batter per inning and he also had success in the majors last season with a 3.66 ERA in 46.2 innings.

For now, it appears the closer’s wheel has landed on Diego Castillo in Seattle as the right-hander picked up two saves this week against the Astros. Castillo has struggled to start the season, but when it comes to relievers, we have to have short memories to chase saves. Over six innings in the last 14 days, Castillo hasn’t allowed a run and he strikes out more than a batter an inning so that helps as well.

Matt Strahm is now the closer in Boston picking up two saves in the last seven days, and that is all we need to see to go after him. It has been a strong season for Strahm in total this year with a 3.78 ERA but things look even better based on his 2.02 xERA as the left-hander is striking out close to 11 batters per nine innings while walking just two. In 43 batted ball events, Strahm has only had two balls barreled up against him with just a 30.2% hard hit rate. It’s unclear how long he’ll be able to hold on to the job, but for now, there’s no reason to expect he won’t if he continues to produce.