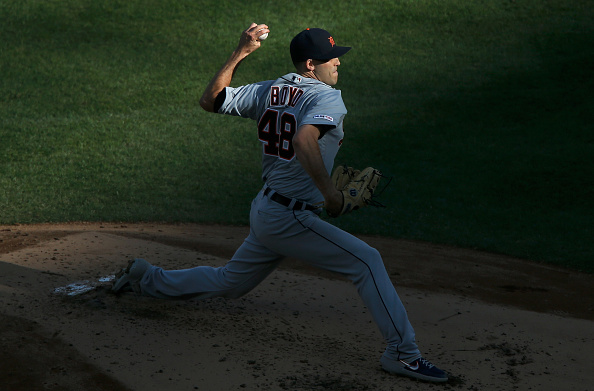 Matthew Boyd (Starting Pitcher – Detroit Tigers) FAAB Bid: 8-10% - Boyd’s gotten off to a phenomenal start so far. Yet, I’m not fully buying into it yet, but he should be considered as a guy you should grab off waivers. In just two games (11.1 innings of work) he has 23 strikeouts, a 0.00 FIP, and a 1.18 xFIP. Sure there’s likely some heavy regression in line for him because this just isn’t sustainable especially for him. So while I wouldn’t spend big to get him, you should grab him for the strikeout upside. By no means will he continue to average two strikeouts per inning and the win potential is minimal with his supporting lineup. But right now he’s a big contributor for K’s.

Jeff McNeil (Second Base – New York Mets) FAAB Bid: 12% - I’m not overly concerned with playing time for McNeil once Todd Frazier and Jed Lowrie return. However, I am annoyed that he hits sixth and the bottom of the order can’t seem to drive him in. McNeil can be a very good contributor for fantasy owners and he’s hitting .368 to start the season with three extra base hits. He’s only second base eligible right now, but don’t be surprised if he gets outfield and third base eligibility as the season progresses.

A.J. Minter (Relief Pitcher – Atlanta Braves) FAAB Bid: 15-20% - This might be last call for A.J. Minter . I mentioned him in Wednesday’s article and Brian Snitker said that Minter would’ve gotten the save opportunity if it were a save situation. His fastball averaged roughly 94mph which he can improve upon and the changeup was nearly 10mph slower so that’s solid velocity separation. If he stays healthy he should be on track for a nice amount of saves. He did allow two walks in his first appearance, but that’s just some of the rust that will go away in time. Go get this guy right now.

Anthony Swarzak (Relief Pitcher – Seattle Mariners) FAAB Bid: 12-15% - If he can stay healthy it’s quite possible that Swarzak could be the full-time closer in Seattle. In his return off the Injured List he logged a two-out save against the Angels. He should be available for this weekend’s road series against the White Sox. Saves are hard to come by and while Hunter Strickland broke camp as the closer, Swarzak could easily take his job. If you want to wait and see on this guy you might be able to. He’s 34% owned on Yahoo!, but under 10% owned on ESPN which seems like it’ll spike in just a few days.

Blake Parker (Relief Pitcher – Minnesota Twins) FAAB Bid: 12-15% - Parker, like Swarzak, could possibly be the closer on his respective team. I apologize for mentioning back-to-back relievers, but their ownership is almost identical, and Parker is also widely available over on ESPN. The Twins haven’t officially announced whether Parker or Trevor May will be the closer in Minnesota. However, May was fairly dominant as the setup guy in the eighth inning last year and Twins manager Rocco Baldelli might prefer him in that spot to let Parker close in the ninth.

Willians Astudillo (Catcher – Minnesota Twins) FAAB Bid: 2% - Astudillo has been the toast of Twitter lately with his progress. What I like about Astudillo is that at some point he’ll register position eligibility elsewhere, but the playing time and where he sits in the lineup is a concern. He has two starts under his belt with two pinch hit appearances. When he has started he’s raked three doubles, scored four runs, and generated three RBI. It’s hard to get excited when he isn’t getting in the lineup every day, but if he keeps up the good start then that shouldn’t be a problem.

Christian Walker (First Base – Arizona Diamondbacks) FAAB Bid: 5% - I won’t be getting too enamored with Walker. He slugged two home runs in the first two games of the season, but is hitless in his last two games. It’s not a big deal for now. With Jake Lamb hitting the Injured List because of a quad injury, Walker should have more playing time. He has plenty of pop, but he also has a bad history with strikeouts with minimal walk upside so he gets a downgrade in points leagues.

Dansby Swanson (Shortstop – Atlanta Braves) FAAB Bid: 5-7% - This is an add definitely worth looking at in deeper points leagues. The downside with Swanson is that he’s hit eighth in the Braves lineup in every game despite a .316/.462/.684 slash line early this season. It’s a very small sample size, but he’s shown better plate discipline with a lower strikeout rate (19.2%) and an elevated walk rate (also 19.2%). Add in the fact he has two home runs, five runs scored, and six RBI and you’ve got yourself a pretty productive shortstop! Steals will be difficult to come by if he’s hitting eighth, but don’t let that deter you in a deeper league where shortstops are hard to come by.

Yonny Chirinos (Starting Pitcher/Relief Pitcher – Tampa Bay Rays) FAAB Bid: 5% - SP/RP pitchers are incredibly valuable in fantasy baseball especially points leagues. Anytime you can slot a starter in a relief spot you’re getting an advantage. If you play in a league that maxes out on the number of starts you can have in a week then Chirinos could be worth targeting. He gets the workload of a starter without having to start the game. It’s basically a free start! Now in his first outing of 2019 that wasn’t the case. The Rays trusted him to actually start the game and he delivered seven innings of one-run ball with six strikeouts against the Astros. He should be in line for a road start this weekend against the Giants so definitely keep him on close watch.

Alex Gordon (Outfield – Kansas City Royals) FAAB Bid: 1% - There is always outfield help on waivers, but if looking for the flavor of the week then Alex Gordon could be your guy. It’s a modest start for the former first overall pick, but he has two home runs in his last two games and you’re getting a guy who hits in the three-hole in his lineup every day basically. Gordon may not stick in your lineup, but he hit 13 home runs last year with a dozen steals in 141 games. In a deeper league, can you really complain about that kind of production?